How Many Catholic Churches Are There? 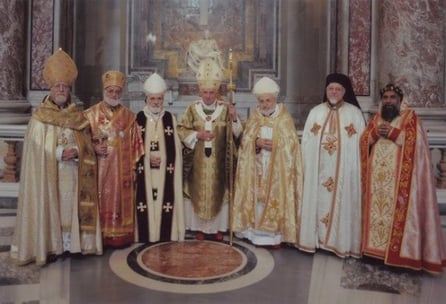 If someone were to ask you how many Catholic Churches there are in the world, what would be your response? Not small ‘c’ churches referring to church buildings, but rather Church with a capital ‘C’, indicating the groupings of believers who call themselves Catholic.

You may very well respond to the question that there is one Catholic Church and to a large extent you would be correct. One can look to the Scriptures to see that the Lord deliberately founded a living Church built on his Apostles in order that his teachings and sacraments would continue down through time. Indeed, the word "Church" comes out of the Greek verb ‘to gather together,’ so the Church at its heart is a gathering of people.

Nor are these Eastern Churches mere annexes of the Latin Church. Each of the 22 Eastern Churches are autonomous and self-governing with their own Patriarch, Major Archbishop, or Bishop. While these Churches were born in places such as the Middle East, India, and Eastern Europe, they are not primarily cultural groups in the same way as one might be a French Catholic or an Indonesian Catholic (both of whom are still members of the Latin Church). Each of the 22 Eastern Churches preserve unique liturgical, devotional, and theological traditions that demonstrate the authentic universality of the Catholic Church. For the most part, the Eastern Catholic Churches choose their own Bishops yet they remain Catholic because they are in full communion with the successor of Peter.

But how did the Eastern Catholic Churches come about? First the obvious. Jesus was not a citizen of Rome and he did not speak Latin (or English). He lived and ministered in the Middle East which was in his time under the Rule of the Roman Empire.

For close to 300 years after Jesus, the new Christian religion suffered heavy persecution at the hands of that Empire. It was the baptism of the Emperor Constantine in 313 AD and the eventual declaration of Christianity as the official religion of the Empire which saw the Christian faith injected into the Western world in a way that shaped deeply the Europe we know today.

However, while the structure of the Roman Empire shaped the way that Western Christianity would pray and think, Eastern Christianity continued to grow and take shape in its own place, understanding itself differently yet preaching the same Christ.

Unfortunately, these differences in tradition and mindset were not always understood by the other, and in 1054 the Christian Church was split by the tragic misunderstanding of the great schism where the West excommunicated the East, and the East excommunicated the West, giving rise to the division known today of Catholic and Orthodox. While the Orthodox Churches have a valid priesthood and sacramental system, the fundamental difference is that the Orthodox do not recognise the Bishop of Rome as having the kind of teaching and governing authority which the Catholic Church claims.

For almost four hundred years after the schism the divisions continued without any real healing or attempt at understanding, but slowly some groups within the various Orthodox Churches felt it important to restore communion with the Catholic Church. The reunification of individual Eastern Churches began in the 16th century with the latest reunification as recently as 1930.

The Eastern Catholic Churches continue to struggle. In their homelands many are persecuted severely and in their new lands of migration these Churches are often still misunderstood and cast to one side, being thought of as multicultural Latin Catholics. All people would do well to better understand the breadth of the 23 Catholic Churches and see in them a living demonstration to the full richness of the Church of Jesus Christ.

If you've had an experience of one or more of the Eastern Catholic Churches do share that with us!