Who's Been Around Longer Than the Rolling Stones?? 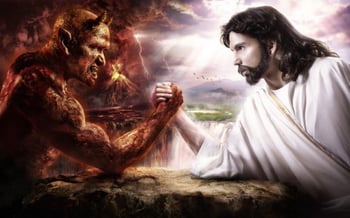 Frankly, especially today, I don't see how it's possible not to believe in the devil, who is evil itself. We don't have to go to the Middle East to find Satan in action---because he's certainly here, too----but what is happening there surely points a finger at personified evil. Consider the recent beheadings of Americans, the crucifixion of Christian children and the burning out of their eyes, the raping of women, burying people alive, destroying their homes, stealing, torturing, defaming, and on and on!

The devil hates goodness, and goodness is all about God.

So, what is the nature of Satan's game?

The devil attacks us in our complacencies, where we are, through what we love. And sometimes the devil has a very attractive face--one that's hard to resist. He lures us by our addictions, the things we think most about, the things we've tied ourselves to. He yanks on the chain of those addictions, leading us further and further away from what is good, to what is evil--until we become his devoted 'pet.' Then he's got us just where he wants us.

Well, that depends. Because we weren't given life on earth in order to fulfill ourselves. Believe it or not, each of us has a greater mission than our own existence. There is a reason for our having been born. God knows our mission even if we haven't yet discovered it. And it has nothing to do with evil, and everything to do with good.

To determine what is good for us requires an informed conscience---an objective conscience, based on what we know to be true. We have to be able to stand outside of ourselves and look into the mirror of what we are becoming. And then, we have to (pardon the expression but I can't think of a better word)... ..we have to have balls enough to admit it.

The Devil is a liar, who will use any means to get to us--flattery is one of them. That misguided axiom we hold to--"I'm okay, you're okay no matter what I do, or what you do" is one of his tools. We see it growing day by day in our present society.

The word Satan comes from the Hebrew verb satan meaning to oppose, to harass someone.The word devil is derived from the Greek diabolos meaning an accuser, a slanderer.The Bible says that in the beginning, God created Satan as a good angel, as a beautiful cherub called Lucifer. Lucifer had a superabundance of spiritual gifts, he was also endowed, as we are, with the gift of free will. God left him free to choose good over evil, and, as we know, he chose evil, rebelling against God and taking one third of the angels (now referred to as demons) with him into rebellion.

These angels irrevocably chose through their free will to rebel against God and not to serve Him. When we do the same in our lives, Satan would be the tempter, the one to bring out the fallen nature in ourselves, the one to assist us in tripping and falling, the one to turn us from God.

How can we say he's not real? And how can we honestly say that we haven't personally learned a thing or two from him?

Struggle
Read
What We Say to Each Other
Read
What Makes a Thing Beautiful?
Read