I saw leeks at the grocery store the other day and decided I needed to make a potato leek soup, something I had never made before. I have a real onion hater at my table, so I had to make sure my recipe did not divulge the "onion family" ingredient.
This recipe, modified just slightly from Alton Brown's recipe, was a real keeper. Everyone, including the onion hater, enjoyed it. Serve with a salad and bread for a full meal, or with just some crusty bread for a light supper. We all agreed it could only be improved with some cheesy croutons.

If you don't have an immersion blender, you can puree the soup in batches in a blender. 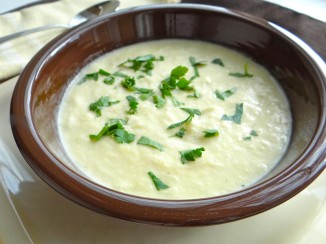 1 pound leeks, cleaned and dark green sections removed, approximately 4 to 5 medium
3 tablespoons unsalted butter
Heavy pinch kosher salt, plus additional for seasoning
14 ounces (about 2 medium Idaho) potatoes, peeled and diced small
1 quart vegetable broth
1 cup heavy cream
1 cup buttermilk
Chop the leeks into small pieces. Fill a bowl with water and place the leek pieces in the water. Let sit for about ten minutes then drain the leeks off the top, leaving any soil at the bottom. This could be done very easily in a salad spinner.In a 6-quart saucepan over medium heat, melt the butter. Add the leeks and a heavy pinch of salt and sweat for 5 minutes. Decrease the heat to medium-low and cook until the leeks are tender, approximately 25 minutes, stirring occasionally.

Turn off the heat and puree the mixture with an immersion blender until smooth. Stir in the heavy cream, and buttermilk. Garnish with parsley if desired.