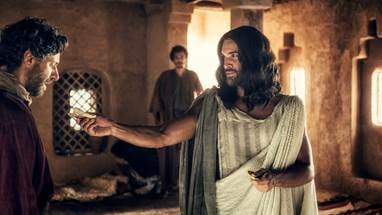 The original NBC series event A.D., the highly anticipated follow-up to the 2013 ratings blockbuster miniseries The Bible, which garnered over 100 million US viewers, recently revealed Jesus and the complete cast from around the world. From executive producers Roma Downey and Mark Burnett, the first episode of A.D. will premiere Easter Sunday, April 5th, 2015.

“Christianity is among the most diverse movements in history, so when Mark and I looked to bring this epic story of A.D. to life on NBC, it was important to us to find a cast as diverse and beautiful as the church is around the world.” said Executive Producer Roma Downey. “We look forward to sharing these amazing performances with our audience, and in them we hope that people see themselves.”

A.D. is an uplifting and harrowing journey through the beginning moments of the birth of the church picking up where the smash hit, The Bible, left off.  A.D. follows the first ten chapters of the Book of Acts exploring the aftermath of Christ's death and its profound impact on his disciples, his mother Mary, and key political and religious leaders of the era, an impact that would completely change the world.  A.D. will take its audience from the intense sorrow of Christ's ultimate sacrifice to the awe-inspiring wonder of the Resurrection and deep into his disciples’ struggle to survive against opposition from every side as they continued to share his message of love with everyone, everywhere.

The series includes compelling context around the Biblical text, focusing initially on the Book of Acts while integrating dramatic history to help tell the full story of the people and their era.  The audience will enter the world of the Apostles, of Pilate, Caiaphas, Herod Antipas and others, all from their own points of view.  Each episode aims to bring the Biblical world to life in all of its grit and glory.

"AD is a triumph! It tells the riveting story of the very beginning of the Church with reverence, excitement and brilliance. This film not only captures our attention but also our hearts as we trace the steps of those who first walked in the way of Jesus. While AD dazzles the eye, it also engages the imagination. The narrative recounts how, with the guidance of the Holy Spirit, a small band of men and women witnesses to the Risen Lord set out to change the world. The mission endures today and people everywhere can find both drama and inspiration in this telling of the story of the Church, her origins, mission and timeless challenge. AD helps us recover the wonder of the ongoing Christian adventure.”

Premiering on NBC beginning Easter Sunday 2015 (April 5th), families will be able to tune in to watch A.D. unfold for 12 consecutive Sundays culminating with the finale of season 1 on June 21st.  Churches and Faith organizations all across the country will be given the opportunity to teach through the Book of Acts in conjunction with the series and participate in Bible reading plans focused on the Book of Acts from Easter through Father's Day.  For more information please visit:  ShareADtheSeries.com