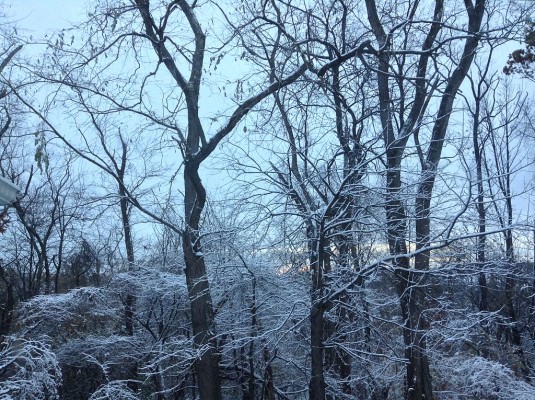 Usually when our four-year-old, Liz, wakes up in the morning, she calls “Daddy!” and then the one-year-old (Paul) and I go “searching” for her.  Paul and I are always the first up, and we start our mornings in the kitchen getting breakfast going.

But when Liz calls, we lay aside pots and pans and go “searching.”  I carry Paul in my arms and tromp up the stairs as loudly as possible, calling in a sing-song voice:  “Liz!  Is there a Liz up here?  I thought I heard a Liz!”

When we get to the top of the stairs and turn into her room I continue, “I don’t see her!  Where could Liz be!  All I see is a big lump of blankets!”  That is because Liz has pulled the covers over her head and curled up in a ball.

Paul and I sit on the bed and start thumping the blankets all around the lump, working our way inward from the edge, all the while declaiming loudly:  “Where is Liz?  I wonder where she could be?  Liz!  Liz!  Has anyone seen Liz!”

At last, when all the rest of the bed has been vigorously thumped, I say, “We’ve checked everywhere, the only thing left is this lump of blankets . . .” and then I peel the covers back . . . and voila!  Paul yells in triumph:  “There she is!” and we all start laughing.

It’s a fun way to start our mornings.

But then came a dark and snowy morning in the middle of an icy winter when things unfolded in a very different, and ominous, way.

Liz didn’t call from her room.  Paul and I were working in the kitchen when Liz suddenly appeared on her own, standing at the kitchen door and looking serious.

“Ok,” I said, drying my hands on a dishtowel.

“I have a question to ask you,” Liz said.

Uh-oh.  I sometimes dread these questions.  Like the time I went to wake her when she was still sleeping, and when I jiggled her arm she opened her eyes, looked at me, and the first words out of her mouth were:  “What language did Adam and Eve speak?”  How’s that for a “good morning!” from your four-year-old.

And now here was Liz again on another morning with another question.

“Dad,” she said, “I’m starting a club.  Do you want to be in it?  So far Pooh and I are the only members.”  (She’d slept with Winnie the Pooh during the night.)

Ahhh, a sigh of relief.

“Here,” she said, handing me a piece of paper and a crayon.  “Write down your letter.”  (Which means the letter my name starts with.)  I wrote down “my letter” and handed the paper and crayon back to Liz.

So now I’m in a private club with Winnie the Pooh—not a bad way to start to a cold, snowy morning.

Later, though, creeping formalism began to overtake the club.  Mom and sister Stephanie (aged three) were admitted to our august membership, and Liz then brought me a new list and required that I write my full name as well as the nickname by which I’d like to known.  But the formalism was tempered with mercy:  Liz also informed me that little brother Paul could join the club, and that “it’s ok if he breaks the rules, because it’s hard for babies to follow rules.”

“You have to hold hands with your partner and have fun.”

Partners were assigned, and it turned out that Liz and I were partners.  So apparently Paul is now the only one in the family allowed to go about empty-handed and grumpy.

Fielding questions from my kids has taught me to heed the advice of Scripture:  “Know this, my dear brothers:  everyone should be quick to hear, slow to speak . . .”  Jas, 1, 19.  And I’ve found that my best answers generally come after I’ve given my thoughts a little time to percolate, or as the Bible tells us:  “Set a guard, Lord, before my mouth, a gatekeeper at my lips.”  Ps 141, 3.

A great example was when I got the classic question:  “Where do babies come from?”  My answer was short and sweet:  “From God.”  Which is not only true, but also completely satisfied my four-year-old.  And at this age, I don’t think that anything more would have been very intelligible to her anyway; I could have talked a lot more and ended up conveying a lot less.  The short version even led to a discussion about the fact that God makes everything that is, that God even made Liz, and God made Liz intentionally, just the way He wanted her to be.

Not that I planned any of that, but it’s always better to be lucky than good!  Like when I got to join an exclusive club with Pooh bear, it was one of the unintended blessings that rewards practitioners of spare speech!