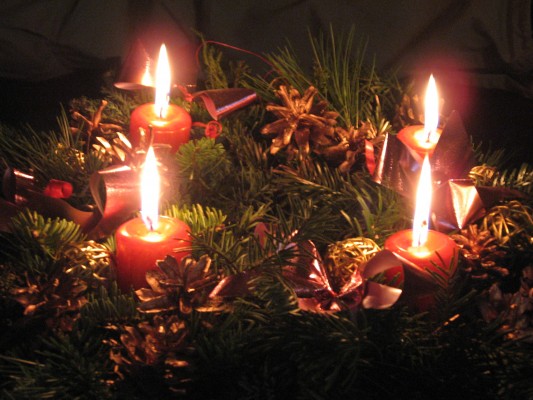 The Advent and Christmas season is upon us. Thanksgiving dinners have come and gone and deal-hunting –shopping has begun. House decorating and baking cookies are in the works. In the onset of the holiday season comes a busy season as well.

With this comes the yearly arguments, or discussions, as some of us call it. Star or Angel on the tree?  What should we name our Elf? Where should we set up the Nativity scene?  In a family of three children, it is rare that everyone agrees on the same answer. Sometimes there is even a brand new option thrown into the wild decision-making. The varying opinions can get heated quickly without intervention.

However, once we calmly negotiate with each other, we settle in and continue in preparing for the season. In addition to family life, we may have other obligations during these days and before we know it Christmas Day will be here – ready or not.

This got me to thinking about the bible story (Luke 12:40) where Jesus tells us to be ready for His coming, for we know not the day or the hour. Instead of cluttering our hearts with too much preparation for Christmas, we must remember that to prepare also means to prepare our hearts and homes.

Will we not only be ready to receive family and friends this season, but Christ as well? Will we not only have gifts for our family, but the gift of Time for our Lord? Advent is a time of preparing for Christmas, but it isn’t just a countdown to the big day.  We are preparing for Jesus’ coming. If Christmas was tomorrow, would we be ready?

There are already plenty of Preparing for Christmas checklists out there, so below I offer a Prepare Your Heart checklist.

Ways to Prepare Your Heart for Christmas

What would you add to this to-do-list?