Last month, Brittany Maynard chose doctor-assisted suicide over aggressive treatment or even palliative care for her brain cancer.  In many television interviews  she gave her reasons for wanting to end her life before the disease ended it for her.  While I found her story to be heartbreaking and sad, her words shocked me and I found them to be deeply offensive.

Five years ago, my mother died from ovarian cancer.  From the beginning of her symptomatology to her death was a time span of about six months.  Mom went through all of the things Ms. Maynard described. Physically she became a shell of her former self as the disease consumed all available body fat as it progressed. She lost the ability to do almost everything including eat.  She was bed ridden and in the end she was in a nursing home under the care of hospice.  My sister and I were with her through it all every day until the very end. I know the death and dying experience well.

Yet I wouldn't have chosen to end mom's life earlier with medical intervention.  I also know that if I faced the same type of diagnosis I would live out my life until a natural end - not out of a sense of martyrdom or duty, but because there was so much to learn during the transition from life to death and I found great value and worth in the experience of dying.

In our culture we don't do entering or leaving this life well.  Birth is medically managed and manipulated as we try to control a natural process - many times messing it up either physically, medically or emotionally.  So I supposed the next frontier of medical care was to try to manage and manipulate death, but just as birth has become more of a medical procedure than a family event, manipulating death robs us of the value and the lessons that come from the natural process.

As Mom became weaker and neared the ending of her life, it gave her time to come to grips with what was happening to her, and it certainly gave my sister and me time to care for her, love her, and understand that we would be facing life without her.  During that time we visited with her, prayed with her, watched as she had little conversations with her nurses and caregivers even after she had quit speaking with us. And although I'm sure there was physical suffering that came through even when the medication was in effect, her body went into a natural deep sleep state for many hours most of the day.  Her life really did slip from one state of being into another by design. 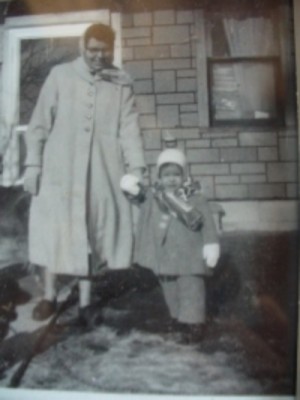 It was heartbreaking to watch at times.  I remember one day I brought her a bag of popsickles because she couldn't eat anything else. I sat by her bed as she sat up and tried to take a bite of one.  The frosty treat was too cold for her, or too big for her to handle, and she ended up opening her mouth and letting it slide into my hand.  I couldn't help but think about all the times that mom had probably caught things from mouth, literally and figuratively, and endured it because that's what moms do.  I was finally repaying her for her patience with me by trying to be as gracious as she had always been.

Mom's illness gave her one more chance to love and mother us.  She continued to teach us on her death bed, about patience, kindness and even joy. We talked about what it would be like for her to see her parents and husband again.  She promised that one of the first things she would do in heaven was find my little boy, Raphael. I think that those final acts gave her the reassurance that we were going to be okay, that everything we had to say was said, and that it was okay- she could go to her eternal home ahead of us.  She didn't lose her dignity because her illness robbed her of her physical abilities - on the contrary she shared her dignity with us. Sometimes as parents we allow her children to experience difficulty so that they can learn a lesson from it.  Being with mom this way kept me learning the many lessons I never dreamed I needed to know, until I needed to know them!

None of us know the future. Our plans and dreams could change in an instant. But as Catholic Christians we know The One who has plans for us and part of that plan includes a physical death and the act of dying.  It's the last adventure, the final learning opportunity. If we approach death like that, I think it helps to lessen the fear of uncertainty; it makes the promises of "death with dignity" through assisted suicide as empty as they truly are.

"When your days are complete and you lie down with your fathers, I will raise up your descendant after you" 2 Samuel 7:12