What to Do When Your Child is Denied Holy Communion? 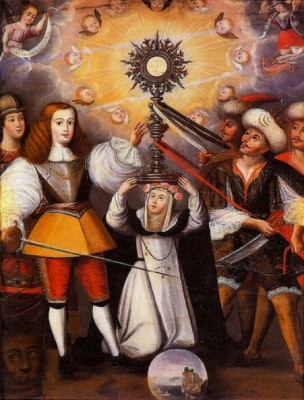 I was flabbergasted at Mass recently.  I happened to glance back behind me after receiving Holy Communion, and saw my eight-year-old standing on the verge of tears before the Blessed Sacrament.  She had presented herself for communion, and the minister had blessed her and was waiting for her to move on.

It was merely a case of mixed-identity -- children don't arrive at the foot of the altar with their birthdates and list of sacraments-received stamped on their heads.  Still, it took me up short.  What, exactly, is the right way to respond?

The Common Problem Nobody Talks About

My three older children had never run into this problem, and neither my husband nor I had heard of this situation before.  I don't recall it coming up as part of First Communion preparation, anywhere, ever.  But when I asked around, the overwhelming answer among those who've parented many children or who regularly distribute communion is that this happens all the time.  Nothing to worry about.  No reason to be alarmed.

An Ounce of Prevention

Jenni Groft, a mother of nine and thus no stranger to the new-communicant limbo, recommended forestalling the problem by putting the youngest communicants in line directly in front of a parent:

I've had this happen and usually make sure I'm behind any young-looking child who can receive, then I can place my hand on the child's head and say with a smile, "Oh, she receives."

Another mom, Jennifer Gregory Miller, agreed that sometimes the parents have to be ready to answer for their children:

All my siblings and their children are small and petite and always have needed the parents to do the "blocking" for communion. Even if your daughter has a "script," there will come some EM that asks it differently or acts in a way that she won't know how to respond.

The clergy I spoke with said that when they aren't sure, they tend to count on the parents to answer one way or the other.  Often good preparation will prevent confusion.  Deacon Greg Kandra observed:

If I have doubts, I always give The Look to the parent, and they usually cheerfully respond one way or the other. Most kids who have received know what to do and how to do it, and those who don't seem a little lost.

Maragret Rose Realy mentioned that she counts on the child's preparation to tell her how to proceed:

I was an EM at Mass and a very young girl held up her hands, but when I said "Body of Christ" she didn't respond with "Amen." I thought...uh oh...and waited for the parent's directive to her AND me. I would rather be corrected by a parent than distribute wrongly.

In our own experience, it seems that my daughter's fatal mistake is a combination of extraordinary cuteness -- she's not short, but she still has that little-kid look -- and presenting herself with too much reverence: She approaches with hands folded in prayer and looks up at the minister and Host while she waits to receive, rather than taking the aggressive hands-out-and-ready stance; thus some ministers assume she's waiting for a blessing, not the Blessed Sacrament.  My multitude of counselors suggested we work on polite assertiveness-training.

Teaching Your Children to Speak for Themselves

What's the best way for a child to indicate she should indeed be receiving?  Katrina Fernandez joked, Gimme Jesus, lady. That's what it can feel like, when a small child is put in the position of correcting an adult.  Joanne McPortland suggested a combination of words and action:

The child should politely say, "I have received my First Communion," and hold out hands or tongue. I know lots of kids who've had that experience.

Michelle Arnold from Catholic Answers agreed with this advice, and in a casual conversation emphasized the importance of children learning not to rely on parents to communicate on this point:

She could say, politely, "I've made my First Communion." In my opinion, it would be better for her to say this than for you to say it for her.

Margaret Rose Realy agreed that children should not feel uncomfortable about speaking up in this way.  When asked about worries that a child might come across as impolite, she insisted:

No, no, not impolite or weird at all! I would feel reassured, and eagerly share Christ with the child. As an EM I don't want to withhold communion...ESPECIALLY to a child.

Armed with this advice, I sat down with my daughter and we practiced our new magic words:  I've made my First Communion.  She seemed relieved to learn that there was in fact an easy, simple way for her to respond.  I think she instinctively knew that this tactic would be a winner, because her attitude was transformed from apprehensive to confident.

Your turn: Have you run into difficulties in with your children receiving the Eucharist?  What solutions seem to work best?

Artwork by Lubiesque (Own work) [CC BY-SA 3.0], via Wikimedia Commons