Being Mary: Alissa Jung's Take on Being Mary of Nazareth

Alissa Jung was born in Münster, Germany. She has just arrived after a 15-hour flight, but you wouldn’t know it. She’s put together and flawless. She’s laidback, and smart (studying to be a physician currently), and about to do an appearance in a Pauline Books and Media store in Culver City. 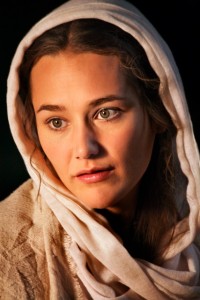 I have the privilege to meet this actress who portrayed Mary so well in this latest Marian movie, Mary of Nazareth. I bring the book which is a companion to the movie, by author Father Donald Calloway.

Fr. Donald Calloway, MIC, a prominent Marian priest, exhibits an unmistakable zeal for the priesthood and devotion to Our Lady. He is a well-known conference speaker on Divine Mercy and the Blessed Virgin Mary. He speaks passionately about these topics in his moving conversion story. In addition, he is the editor of the books The Virgin Mary and Theology of the Body and The Immaculate Conception in the Life of the Church. He has also authored four books: Purest of All Lilies: The Virgin Mary in the Spirituality of St. Faustina, No Turning Back: A Witness to Mercy, Under the Mantle: Marian Thoughts from a 21st Century Priest, and Marian Gems: Daily Wisdom on Our Lady.

I ask her to show me which photo is her favorite from this coffee table style book. Catholic art always has the intention to draw in the viewer to contemplate the lives of our Redeemer, Our Lady, saints, and angels, and this book is no exception.

I break the ice by telling her about my sons ages 6 and 7, who have asked me to tell her what a great actor she is. They have seen the movie, and watched it as if mesmerized. She is touched, by the sentiment, and thus begins our bonding as mommies. Her little boys are 10 and 14 years old. We chat freely about mommy stuff before digging into the role. 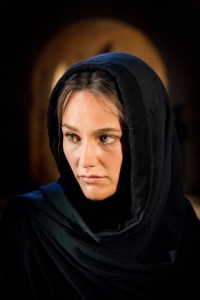 Alissa is Protestant, and another actress was already chosen for this role. Her audition tape, sent from her mission in Haiti, was accepted, and ultimately led to her gaining the part of Mary. I can see why after seeing the movie. Her softness is so comforting as Mary. She studied the writings from The Visions of Katharina Emmerick, as directed by European film director Giacomo Campiotti. Those writings helped round out the character of Mary, since so little is really revealed in the Bible.

Alissa informs me that there was a mass to start the filming of the movie, and again at the end. There were individuals from many faiths working on the film, including Muslims, as they were on location in Tunisia much of the time.

I ask if her faith life has changed much since filming the movie. What she has found is a new respect for Mary. She knew that she was playing this HUGE icon of a role in Mary. It was a bit intimidating at the start to think of it that way. Instead she focused on what it would be like to be the person of Mary, with all the joys, challenges, and heartbreak.

I think she does a spectacular job of this in the movie. Her faith life of course has been impacted by this project, because she has taken time out of her very busy schedule to come and promote this book and movie again without further compensation. This is a labor of love, and fruit of the experience.

At the end, I asked if there were any special messages for the moms of our CatholicMom.com community. She said that as a mother, she was able to embrace that letting go, and trusting, was especially required of Mary. Letting go, and deep trust in God, is for all of us to do with our own children. We gain a huge respect for Mary when we contemplate that she had the most perfect child, and the most loving relationship with Him, yet she knew that her heart so tied to his would break as she gave Him up to the World and for the World.

Married to her longtime friend and mommy to 3 high energy children, who demand her constant attention, and direction, Marya serves on the board of directors for a Domestic Violence non-profit. When not working, she is working out, taking the family for nature walks and adventures, or at the movies. She lives in Southern California and feels absolutely blessed to enjoy the beauty of the area every day.