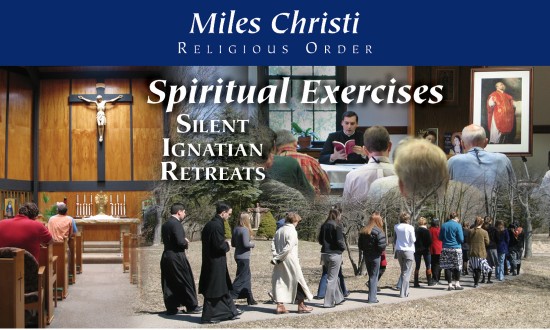 “Try to leave here changed into someone else,” said Fr. Paul. “A change noticeable to others.”

Fr. Paul’s words spoke to me deeply; it was as if God was speaking directly to me. The words confirmed that I was exactly where I was supposed to be: on my fourth retreat of the Spiritual Exercises of St. Ignatius of Loyola. Even though the weeks and months prior to the retreat had been spiritually dry and desolate, God, in His merciful love, had invited me to spend some extended time with Him again.

The words about change also brought me back six years prior, when my husband Greg went on his first Spiritual Exercises retreat. Then, I was vaguely familiar with what “spiritual exercises” meant and who St. Ignatius was. But in reality, I didn’t really know much other than he was in silence for an entire weekend.

But I will never forget what happened after Greg’s retreat. You see, Fr. Paul’s words became reality for me, when Greg arrived home after his retreat. As he walked through the door, and I made eye contact with him, it was obvious. Something was different about him. He hadn’t even said a word, but I could tell he had changed. Whatever happened to him during those silent hours with God transformed him. He was a noticeably new creation.

As the next week unfolded, Greg shared with me how life changing the Spiritual Exercises had been for him. I learned more and more about the work God did in his life that weekend. I was in awe and amazed! I was grateful to God for bringing my husband even closer to Him. And as the weeks turned into months, Greg remained faithful to the transformation that God made in his heart by working on the “resolutions” he made on the retreat.

Greg encouraged me to attend a women’s retreat of the Spiritual Exercises, but I’ll admit, I was slightly apprehensive. I longed for the silence and the deeper intimacy with God, but I was a bit nervous about the “exercise” part of the retreat. Exercise in the form of meditation, reflection and prayer. Exercise in the form of contemplating sin and going to confession. And when my weekend finally arrived, I was downright nervous about what God had in store for me. Would it be hard? Would it be painful? Would it require a gardener’s shears to prune and prune some more?

But God’s plan for me was more awesome than I could have imagined! The retreat certainly involved exercise of the mind, the will and the heart. But in God’s merciful love, the work of the Spiritual Exercises was done with Jesus walking every step of the way with me—and with each retreatant.

So, what are the Spiritual Exercises?

“The Spiritual Exercises are the fruit of the conversion of St. Ignatius of Loyola,” said Fr. John Ezratty, priest of Miles Christi. The exercises are based on Ignatius’ own discernment of God’s will in his life, plus the inspiration he received from the Blessed Mother.

The original Spiritual Exercises retreat is 30 days. Jesuits and other religious communities, like Miles Christi who have an Ignatian spirituality, still attend a 30-day retreat. However, most lay people cannot take 30 days out of their lives to go on retreat, as much as we may like!

So, the 30-day retreat has been modified to a weekend format for the laity.

The Spiritual Exercises retreat that my husband and I attended was directed by a group of priests from a religious order called Miles Christi, which means soldiers of Christ.

“Our apostolate is to sanctify the laity,” said Fr. John.

Founded in 1994 in Argentina, Miles Christi came to the United States in 2000. There are 25 Miles Christi brothers and priests throughout the world, and seven who serve in the U.S.

In the U.S., they live in Michigan and California, but they travel throughout the country presenting the Spiritual Exercises in 18 cities. In 2015, Miles Christi will offer nearly 50 Spiritual Exercises retreats in the U.S. In addition, Miles Christi offers spiritual direction, especially to young adults, youth camps and a host of other activities.

Returning to the Spiritual Exercises, they include a very familiar retreat format, including a series of talks, times for prayer and meditation, spiritual direction, Confession and Holy Mass. It is a completely silent retreat, including meals. However, there are enough times of corporate prayer, such as the recitation of the Rosary, as well as time to talk with the retreat master, that it does not feel isolating.

“The exercises are, in fact, a set of meditations and prayers in an atmosphere of contemplation and silence, and above all a special interior impulse-deriving from the Holy Spirit—to open ample spaces of the soul to the action of grace,” said St. John Paul II.

The most important part of the retreat is conversation with God.

“Like St. Teresa of Avila said, to pray is to talk to Jesus like you talk to a friend,” said Fr. John.

The Spiritual Exercises have helped shaped our personal and family prayer times. Spending time communing with the Lord in mental prayer has helped us grow closer to Him, “for prayer is nothing else than being on terms of friendship with God” (St. Teresa of Avila).

I am not talking about hours per day in prayer. The retreat directors are realistic in recommending to begin with 15 minutes per day. And to the busy moms that attend the weekends, they are especially realistic with what we can and cannot do. With our children, we have introduced them to the night prayers we pray on the retreat, and they have responded well to the simple rhythm of the familiar routine.

During the Spiritual Exercises, retreatants focus on their own sinfulness and how it offends God. One of the crowning moments of the retreat is the opportunity to go to Confession.

“The main goal is to see that we have offended Christ, but Christ loves us,” said Fr. John. “So, we focus on Christ’s mercy.”

After Confession, retreatants desire to know God better, to fall in love with Him and make a decisive resolution to follow Him.

For me and Greg, this means making an effort to attend monthly Confession as part of our regular schedule. Over the years, the retreat also has led us to attend daily Mass when we can, and most recently we have adopted a weekly holy hour before the Blessed Sacrament.

St. Ignatius teaches that the devil still tries to deceive us, even after we resolve to not offend God anymore. We will still encounter attachments in our hearts that hold us back from Christ, which is why St. Ignatius invites us to detach our hearts by focusing on the mysteries of Christ’s life.

Many of the meditations (or talks) that are presented take us back in time to Christ’s childhood, public ministry, passion, death and resurrection. We imagine ourselves in the scene, which leads to understanding what message God is conveying to us in the mystery.

The retreat director tries to lead the soul through preaching and spiritual direction, but the most important work is done through the Holy Spirit.

“The Holy Spirit works differently in everyone,” said Fr. John. “We meet a lot of people, and it is very consoling for us priests to see how the Holy Spirit is so active.”

By learning about the “good spirit” and the “bad spirit,” as St. Ignatius describes, Greg and I have been able to more fully discern how the Lord (and the devil) is working in our lives, and we can help our children discern this, too.

In this second week of 2015, the concept of New Year’s resolutions is still fresh in our minds. Many of us have them finalized, typed out and posted in a prominent spot, while some of us are still trying to figure out what to focus on first. Perhaps, still, there are a few of us who have already given up hope that real change can happen this year.

Toward the end of the Spiritual Exercises, the retreatant is encouraged to make a set of resolutions that he will work on throughout the year. Much like New Year’s resolutions, they focus on the areas of life that need some improvement. However, thanks to guidance in spiritual direction, the resolutions end up being very practical and doable. A list of 25 things is not encouraged; rather it is more realistic to select three or four, so that real progress can happen within a year.

Making simple, yet bold, resolutions in the light of faith has allowed me to keep a steady focus in between my retreats. I take time to review my retreat meditations and notes, and I regularly call to mind the areas of my life that need the most attention. It can be as simple as maintaining a consistent prayer life. On my most recent retreat, one of my resolutions involved being more realistic in my vocation. No matter what they are, these real resolutions call me to love more, follow Christ more closely, and strive to do God’s will in a more generous way.

For more information on Miles Christi and to find a Spiritual Exercises retreat closest to you, visit their Web site and go to the Activities tab. Attending a retreat could just be your best resolution for 2015! 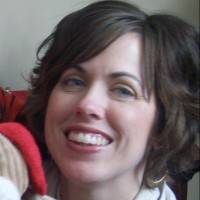 Sarah Damm is a Catholic wife and mother of six children, living in Minnesota. She spends her days running errands, helping with homework, and keeping up with laundry and the family schedule. Sarah loves her faith, coffee, and good books. She blogs at SarahDamm.com.