Today you get to meet one of my favorite people, someone who doesn't come to dinner as often as he should and who I truly feel is my brother in Christ. (I would beat him up in a heartbeat...and hug him in the next...)

Gordon Mott was a software guru guy of some sort, making big bucks, when he discerned his way into the Catholic Church and then into the seminary. I got to know him last year, when he spent time helping me with our Confirmation follow-up program and then interned at our parish for the summer, all in his capacity as a seminarian.

Gordon has a love for Jesus, the ability to fix almost anything, and a sense of hilarity that are a constant delight for me. There are those of us who pretend to be scholars or want to be scholars: Gordon is the guy who really could be and maybe is actually a scholarly type: whenever I'm feeling like a Catholic nerd, I only need to text him a question to find out he not only has read the book I'm wondering about, but that he's also read the three that it's based on, the ones that are written in Greek, Latin, and Hebrew. (I'm only slightly exaggerating.) 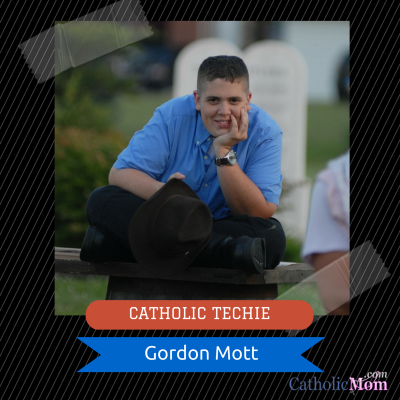 Madly in love with Jesus.

What was the coolest thing I did?  I once got involved with a small client who  had paid a large sum of money for a permanent license to some software critical to their business.  The vendor decided that permanent licenses were no fun, and so they shipped out a patch that forced existing clients to pay an insane amount of money to keep the software enabled or else they would be locked out of the system they had already paid for.  The client did not agree to this change, they had no money to litigate, and the data was locked in an old database from the early 90s.

Shutting down to re-enter everything by hand after a move to another platform was not an option.  The vendor literally told them that they had no choice to pay because there was no way to get the data out.  I reverse engineered the database's file layout with absolutely no vendor tools, and no documentation.  I was then able to create dictionary files for the data, and convert everything into a newer release of the database with SQL support.  I then wrote a conversion to normalize the data (make it simple, and insert it into a better database called MySQL.

I called the new vendor, and asked them if they could import using my schema... They laughed, and three days later we had the client up with sample data to make sure things looked good.

When social media first took off, the criticism was that all too often, we were eager to play internet chess with Ukrainian potato farmers, but didn't know the names of our neighbors.  Certain aspects of that criticism still ring true, however it's exciting for me to see Catholics who have no local peer group reach out online to find the peer support they need.  I know one such person who was made fun of by their friends for their devotion to the Holy Rosary... but they sign on every night to pray a rosary on OoVoo with a dozen semi-random people from all over the world...  that's amazing to me.  It gets me excited about technology in a way that I haven't been for a very long time.

The most exciting aspect of my work is that it is now over, and I have entered this particular phase in my life.  Nothing has ever excited me quite so much, or been quite so rewarding as my having entered into seminary formation.

In my spare time, I tend to tinker quite a bit. It relaxes me: some people do crosswords.  I tinker.  You'll often find me with a soldering iron in my hand fixing something that has broken around here, or with a wrench in my hand helping someone with their car.  I do still do some programming; I'm currently working on two application ideas for Android, and I'm doing a bit of embedded development right now with the Arduino platform.  Oh, and I'm waiting on a DC-DC converter for a backlight system I'm building with those really sweet new BridgeLux modules.
I think that's the best thing about being a techie - Robert Pershig wrote in Zen and the Art of Motorcycle Maintenance about the importance of knowing the nature of a machine rather than knowing a specific machine.  It's a relatively minor step to go from thinking about how to build things in software, to analyzing how existing things are built in software... to analyzing how things are built in hardware.   It's a very portable mindset which is an awful lot of fun. There's an awful lot of promise to be found in the Maker movement ( http://www.makezine.com,  http://www.hackaday.com)