Handling Tantrums: It's Not If, It's When! 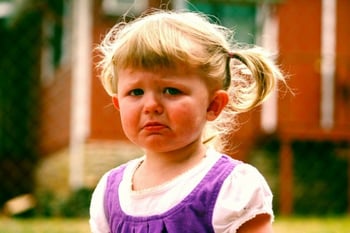 I was talking to a counselor recently, in an attempt to get some good parenting strategies for dealing with tantrums and misbehaving at home.  When I had finished describing the most recent melt down situation to him, he asked me what my plan was for handling the next tantrum.  If you're imagining this exchange in your head, picture me with the confused look, as I was thinking - I don't know how to handle the next tantrum, OBVIOUSLY, that's why I'm here with you.  What the counselor said next was the "light bulb" moment, he told me, "It's not if the tantrum is going to happen, it's when!" Now as a mom, I have seen my fair share of tantrums, sometimes daily, on a good week, every few days, but somehow I had fooled myself into nievly thinking that one day they'd just stop, that the tantrum phase would end, or that there was some magic phrase I was going to say to my children each time a tantrum started that would make it suddenly stop, it was such a nice fantasy!  The concept that he explained to me was nothing new, but something about the way he went onto explain the idea made me think about it differently.   He reminded me that situations can always spark tantrums, we need to create a game plan for how were going to handle each situation, so the next time it happens, we can be ready.  Nothing new right, but it got me thinking.

I had gone to seek help to find ways to be a better parent and hopefully find the key to creating a tantrum-free household, and after listening to him, it actually sunk in, there will always be moments of struggle, we're human, I have my own fair share of tantrums, so to think that my little kids won't have moments where they disagree with me is foolish, I just need have to have a variety of strategies in my back pocket.  Now this isn't my first Rodeo, I've been coming up with strategies to address behavior for years, but my strategy for finding strategies, was to come up with, or find one strategy at a time, rather than a few each time.  I would google, Facebook, and ask people how they dealt with a "bad" behavior, then I would pick one strategy (ex. taking away toys whenever "bad" behavior occured) and I'd try it for a few weeks.  The same pattern usually occurred, it worked great the first week, maybe even the second, but by the third, the kids were over it, and my "perfect" technique stopped working.

The counselor advised me to constantly give my children choices.  For example,"If you wake up tomorrow and get dressed right away, then we can read a book together.  If you don't get dressed right away and I have to come help you get dressed then we won't have time to read together."  If they get dressed right away, they get rewarded with the book, but if they're struggling to get dressed I can remind them that we have to get dressed so we can read the book and that if they don't get dressed soon, we won't have time to read before we leave for school.  Either way, they are empowered to make their own choice, they choose the behavior and the outcome of that behavior.  The key he mentioned here (which is admittedly the hardest part for me) is to be empathetic with them during these reminder moments.  "Gosh I really want to read with you, I'm hoping that you can get dressed cause I really don't want you to miss out on the story this morning."

For me personally, I spend more time being irritated that they're not getting dressed and I want to roll my eyes at the idea of being empathetic to a kid whose not listening, but his technique is so much more loving and really makes us feel like we're working as a team.  I am encouraging them to follow directions so punishments can be avoided, rather that pinning us against each other and demanding behavior while threatening consequences.  I prefer to find ways to stay positive and encourage good behavior instead of feeling like I'm always threatening with a consequence.

So let's start sharing ideas!  How do you handle the tricky situations like getting dressed in the morning, doing chores or changing attitudes?  What choices do you give your children to encourage them to make the right choice?