The 10 Commandments & Cleansing of Temple: Reflection for the Third Sunday in Lent 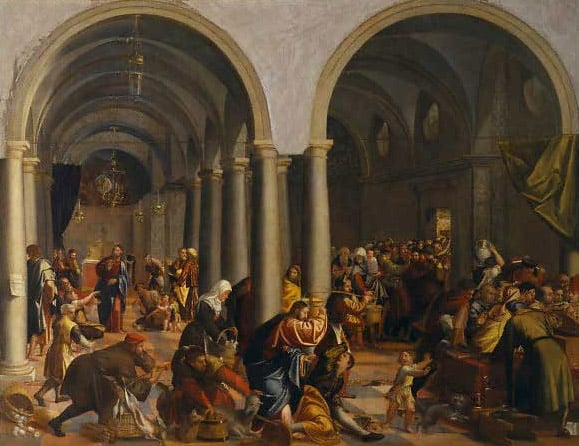 "The Expulsion of the moneychangers from the temple". Licensed under Public Domain via Wikimedia Commons.

When it started, all was fresh and new. An unnamed but mighty God freed a motley crew of slaves and offered them a new way of life in a new land. Most importantly, he offered them a privileged and exclusive relationship with Himself.

In the ancient world, most nations worshipped their own god and believed themselves to have a special claim on his favor. The Greeks had Zeus and the Canaanites, Ba’al, for instance. But this was different. This mysterious God called himself “I AM who AM” and apparently tolerated no rivals. He had beaten the Egyptian gods on their own turf and appeared ready to take his new people into Ba’al’s territory. None of the other gods required any special behavior, just sacrificial worship. This new one required fidelity to a code of conduct that reached into every department of life, not just the religious. No area was off limits to the claims of this God–economics, family life, even sexuality. If Israel wanted this special relationship, they had to accept the stamp of his ownership on every aspect of their existence. That was the real meaning of the Ten Commandments, this Sunday’s first reading.

But what began with heartfelt zeal ultimately became ritual routine. The code of the covenant had called for animal sacrifices and a special place to carry them out. The devotion of David desired a fitting place for God’s house. The resourcefulness of his shrewd son Solomon made the dream a reality. After the Babylonians destroyed it, it was rebuilt in tears, a shadow of its former self. Then a powerful king came along who saw an opportunity to make the temple once again the pride of God’s people. He rebuilt it in even greater glory. But it was more a monument to himself than to God. After all, he cared little for God, and was not even himself a full-blooded Jew. He was rather a cold-blooded murderer whose name will forever live in infamy–Herod the Great.

How about the religious leaders of Herod’s day? Religion had become for them a business. Animals were needed for sacrifice, so they were sold in the temple precincts. Hebrew shekels were needed for the payment of the temple tax, so moneychangers were conveniently available so people could exchange their Roman money for the appropriate Jewish coinage.

The prophet Malachi (3:1-5) had predicted that the Lord would suddenly come to his temple to deal with such things. And Zechariah (14:21) had foretold that on the day of the Lord, there would no longer be any merchant in the temple precincts.

So when Jesus overturned the money changers’ tables, he was fulfilling Scripture and making clear that the messianic time of fulfilment was at hand. No more business as usual. No more ho-hum approach to religion. It was now time for living faith, not just religious belief. Zeal for God’s house consumed him, and he had come to light the fire of zeal in us as well.

Lent provides for us an opportunity for a gut-check. Has our religion become cold routine, a mere collection of intellectual convictions and external rituals as with the scribes and Pharisees? Is our piety more a monument to ourselves than to God, as in the case of Herod? Is Christ crucified for us the power and the wisdom of God, or just a plaster figure hanging on the wall?

The story of Jesus and the moneychangers comes at the beginning of the Gospel of John. From the very outset of his public ministry, Jesus predicted his death and resurrection to his uncomprehending audience. It would be his self-sacrifice that would ultimately lead to a new beginning. And to prepare for that event, he cleaned house.

As we prepare for the celebration of the mystery of redemption, it is time for us too to clean house and to honor his self-sacrifice with authentic sacrifices of our own.

Image credit: "The Expulsion of the moneychangers from the temple". Licensed under Public Domain via Wikimedia Commons.