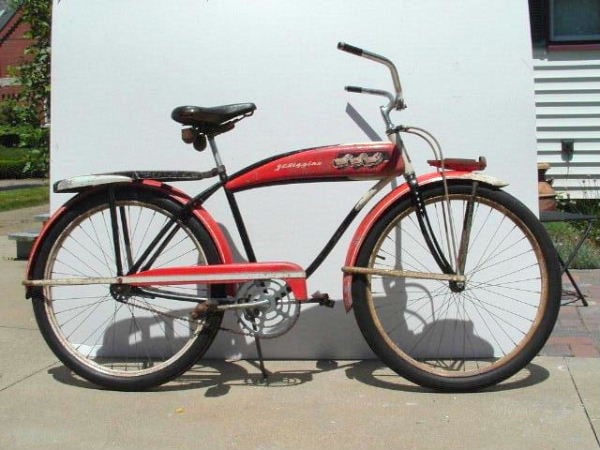 When I was a boy in Cleveland, Ohio, I would leap out of bed just before sunrise on trash day, tie an industrial-size garbage bag around my handlebars, and cruise down the red-brick streets to rummage through boxes for curbside valuables that my Dad would sell at the flea market every weekend at the local drive-in.

Even as a kid, I understood that this was a means of going out for family dinner or summer admission to the big amusement park. I was never forced to go garbage picking. I wasn’t abused. I wanted to help and, for me, there was never a stigma attached to these childhood treasure hunts. We were simply recycling someone else’s discarded possessions into supplemental family income.

Things were different in the late 1960’s and early 70’s, but forty years later much remains the same.

I hadn’t given much thought to my childhood expeditions until a recent encounter at a local gas station. I saw him coast onto the station lot through the corner of my eye. I was filling up my tank on the way to work. My first thought was very uncharitable. “You can’t pump gas into a bicycle. I hope he doesn’t ask me for money.”

I didn’t lift my head up so as to avoid direct eye contact at all costs. The gentleman on the bike had no interest in speaking to me or any one else at the pumps. He went to the trashcans and quietly transferred the recyclable plastic bottles and aluminum cans from the large receptacles to his own industrial size garbage bag.

So correct me, LORD, but please be gentle. Do not correct me in anger, for I would die. - Jeremiah 10:24

I was compelled to look up to see a cleanly dressed man in his early forties digging through the trash with all the dignity, humility and self respect that I robbed from him in my silent, cynical judgment.

I recalled the memory of a young boy cruising down the red-brick streets of Cleveland, Ohio. At that moment, the scales fell from my eyes and my heart was softened. I had some empty plastic bottles on the floor in the back of my car as well as an extra large full bottle of water. I walked over to meet him where he was. I handed the bottles to him and looked at his face. He was groomed and clean-shaven. His eyes were warm and tired with a genuine glimmer of joy and hope that can only be predicated on the Spirit of God dwelling within a soul. He gratefully accepted the empty bottles and he put them in his bag.

He held the large bottle of water and said “Thanks. I’ll save this one to drink later. Every ounce counts.”

I’ve since retired and there’s not much I miss about going to work in prison for twenty-five years but, I am eternally grateful for the liberating encounter on my way to prison that afternoon. I’ve pondered the profound meaning of these three words in my heart for nearly a year.

Regarding life, whether we’re growing in our mother’s womb, wailing in birth, in our prime or golden years, active or infirm, burned out, rusted away, or exhausted and spent in the final moments of our natural death; every second, every breath, and every heartbeat is worth infinitely more to God than we can ever comprehend.

Regarding water bottles, a thirst is quenched with one full bottle of water. A family income can be supplemented with the recycled value of many empty bottles.

Regarding life and water bottles, every ounce really does count.