An interview with the Priests at St. John's Food Pantry: International Singing Stars with the Hearts of Servants

On a rainy Friday morning ...

It was not your typical Friday at St. John’s Food Pantry in Worcester. As some five hundred of the city’s poor streamed in for a hot meal, three new faces greeted them. These men radiated warmth and kindness as they dished up generous portions of scrambled eggs with ham, Belgian waffles, and various meats and vegetables to grateful patrons.

Most could not have guessed that they were being served by world famous singing stars The Priests. That very night the critically acclaimed group would give a concert at the Hanover Theater to a near-capacity crowd.

Concrete results from the concert

Frank Carroll arranged for the performance to raise funds for the food pantry. He invited Fathers Eugene and Martin O’Hagan and David Delargy, all from Northern Ireland, to serve breakfast at the pantry to give them a full picture of the good their concert would bring to the poor of Worcester. “I wanted to show them exactly where the funds were going,” he said. 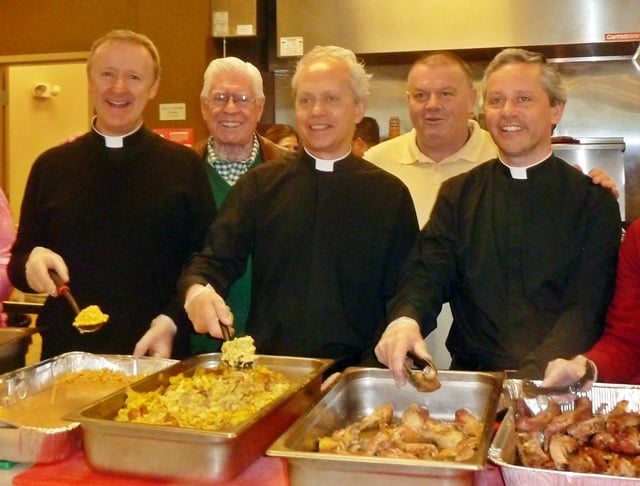 Father Martin writes of his impressions in his tour blog: “The centre caters for so many people who are unemployed, homeless, suffering from mental problems and more besides. It is an oasis of peace and connection … We had the great invitation from Frank Carroll to visit the scheme and it was so humbling: the graciousness of all and the gratitude of those who came to be looked after … I will always carry this experience: We are not what we have! This was indeed an eye opener …”

A well-oiled machine serving the needy

The Priests were given a full tour of the facility by manager Bill Riley, who explained that some 2000 people are serviced each week through the twice-weekly hot meals and foodstuffs given to families. Father Eugene, Father Martin and Father David chatted with many of the volunteers, including students from Holy Name High School. Some of the students were on exchange from China. 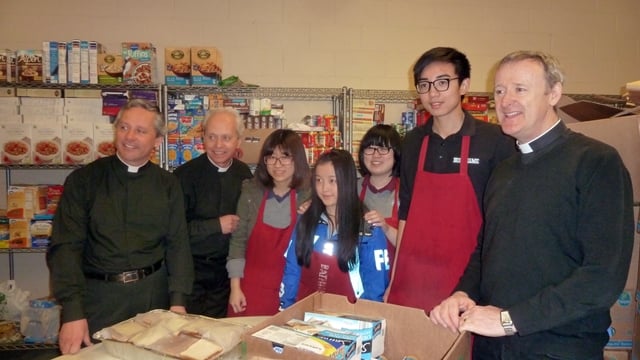 According to Father Martin, Mr. Carroll had worked for three years to arrange for The Priests to perform.

"The whole evening was electric ..."

The concert that night was a rousing success. Soprano Emily Suuberg from St. Mary’s in Shrewsbury who had won the competition to sing with The Priests “sang very well indeed and with a wonderful stage presence” according to Father Martin.

He went on to write that “The concert was met with great enthusiasm and the audience connected with us immediately … The whole evening was electric … the evening finished with The Irish Blessing and the audience loved every moment of it …we left the stage very uplifted.”

A tribute to "The Sound of Music"

One of the hallmarks of their U.S. tour has been in paying tribute to the fiftieth anniversary of the movie “The Sound of Music.” Each priest remarked how much the musical had meant to them during their childhood. Father David shared that “We are going to sing “Edelweiss” and we’re going to invite audience participation, get them to join in as well, have a ‘sing-a-long’ moment.” Father Martin had been most impressed with Lady Gaga’s tribute to the musical and commented that “she was amazing. We got to see Lady Gaga in a slightly different light.” 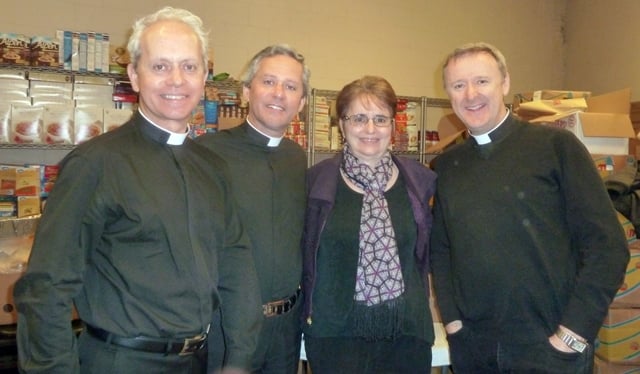 The Priests and me! A privilege to be with such Godly men.

Just how do international singing stars who are also full-time parish priests balance everything? Father Martin grew thoughtful in his response: “It is a bit of a juggling act to be very honest, yes, but we are away for certain periods of time during the year; we're away for two weeks at this particular point. We do have other concerts throughout the year but they're in spikes. We're able to go to the venues, sing and return fairly quickly. So we're there in the parish most of the time to be very honest with you. So it's about juggling three separate diaries from three very different parishes. Eugene is also under the radar of the bishop. It's trying to put all that together; we strike the balance and it works pretty efficiently.”

Father Eugene among other things is a canon lawyer, judicial vicar and Chancellor of the Diocese of Down and Connor. He is also the parish administrator of three different churches.

Father Martin has been a Diocesan Advisor in Religious Education for thirteen years and is currently the parish priest at three various churches.

Father David has spent seven years as a teacher of Religious Education and German at Our Lady and St Patrick's College, Belfast, and also was Chaplain to the University of Ulster at Jordanstown. He also is the parish priest for three churches.

Listen to the entire interview with tidbits not included in this post:

All fervently believe that parish life keeps them grounded. There is no time to be carried away by fame and glory when there are so many people who need their attention.

Thinking of parishioners as they sing

It is, in fact those very people that the singers reflect upon as they perform. “All our experiences as priests, whatever they may be, the pastoral experiences or the personal experiences with people can also be very much woven into the music,” said Father Martin. “So as you're singing you're actually thinking about people, you're thinking about contacts, you're thinking about a particular situation that you were involved with, or a time of vulnerability in someone's life or a high point in their life. So that's another aspect in terms of the music: you weave people and circumstances into it and it's wonderful.”

Feeding on the music

Music feeds them spiritually. “I think with music, when you marry the music with the words of the psalms, when you sing songs like ‘Ave Maria’ and ‘Panis Angelicus’, it takes the expression to another level; you end up expressing the core of yourself which you can't do with the spoken word,” said Father David. “We're fortunate with the gift of music and being able to sing; it brings it to another place and you can't but be affected by that, singing the words. It's a beautiful marriage of the words, our faith and the music and it certainly helps your spiritual life.”

“We all had the same singing teacher, Frank Capper, and he used to say, ‘What comes from the heart goes to the heart,’ said Father David. “You really have to feel it yourself before you can communicate it to others and that’s what we really try to do.”

There is no doubt that their beautiful messages of love, faith and service resonated with the audience at the Hanover, along with the patrons of St. John’s Food Pantry.