“God thy sea is so great and my boat is so small.”  Brenton Fisherman’s Prayer

“Let nothing disturb you, nothing make you afraid.” Teresa of Avila’s Bookmark

This past Holy Thursday Louis Jordan was rescued after being lost at sea for sixty-six days. He says he survived by capturing rainwater in a bucket, snagging little fish to catch bigger fish, and praying to God. Frank Jordan, his father, an experienced sailor, remained optimistic that his son would turn up. “With God, all things are possible,” he told friends and family three days later on Facebook. 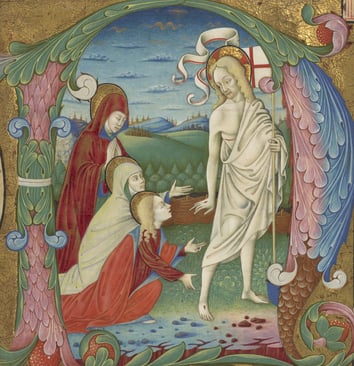 Three days after Holy Thursday we have THE MOST amazing rescue story to tell the world. We were rescued from fear. That first Easter morning two women standing at Jesus’ empty tomb were tossed about by torrents and waves of fear (Ps. 42).  “Where is the one we seek?” they asked. “Do not be afraid,” an angel replied.  “I know that you are looking for Jesus, who was crucified. He is not here; he has risen....go quickly and tell his disciples (Mt. 28:5-6).

These words “Do not fear” are woven throughout scripture, from Genesis to the Resurrection. They always herald good news and announce a mission. As the women hurry away from the tomb they meet Jesus, “Do not be afraid,” he says, and again a mission is announced, “Go and tell my brothers to go to Galilee; there they will see me” (Mt. 28:20).

One acronym for fear is “face everything and run!” When Jesus told the women “go” he didn’t mean “run the other way.” His Spirit empowered them to share the good news that we need not be afraid. There are times, says Rowen Williams, that “We want to stand still and be reassured, rather than moving faithfully with Jesus along a path into new life whose turnings we don't know in advance. ‘Do not cling to me’ Jesus says to Mary and to us; instead, ‘go and bring others along on the journey’”[1] (John 20:17). Easter turns our fear into faith and faith into evangelization as we [2]

The best acronym for fear is “false evidence appearing real.” Easter gives us true and real evidence for not being afraid. The apostles were afraid at first; Tom Wright tells us what happened next:

“They had every reason to be afraid: An earthquake; an angel; guards struck down as though they were dead….As Jesus goes to the cross, heaven and earth, God’s space and our space are drawn together in a new way. The events that are unfolding carry cosmic significance. Jesus has gone to his death bearing the weight of evil, the evil that has infected and corrupted human life and the whole world, the evil which is symbolized both by what we call human evil, not least the evil of arrogant human empire, and by what we call natural evil, the waves and storms of the physical world. Now here, with the defeat of evil and death in the cross, the earthquake and the angel are, strangely, just what we ought to expect. And the guards, symbolizing here the political and military powers for whom they are working are struck dumb. Pilate, Herod and Caiaphas and their henchmen don’t belong in this new world, the new world where heaven and earth have come rushing together in a fresh way, a fresh celebration, a worked full of new possibilities, new power which leave the powers of the world lying helpless on the ground. Don’t be afraid! God’s new world has begun, and you’re invited to be part of it. That is what Easter is all about. That is what baptism and confirmation are all about.”[3]

God’s new world has broken into the old one. God’s new creation happens through God’s renewed people. We are resurrection people. Our Easter greeting, “Christ is raised! He is truly risen! He is with us!” is our “go and tell.”

Pope Francis reminds us that "Enthusiasm for evangelization is based on this conviction. We have a treasure of life and love which cannot deceive, and a message which cannot mislead or disappoint. It penetrates to the depths of our hearts, sustaining and ennobling us. It is a truth which is never out of date because it reaches that part of us which nothing else can reach. Our infinite sadness can only be cured by an infinite love" (Evangelii Gaudium, 265).

[3] Tom Wright, The Scriptures, The Cross and the Power of God: Fair Use. Westminster John Knox Press (January 1, 2006). http://www.wjkbooks.com/Forms/CoursePack.aspx