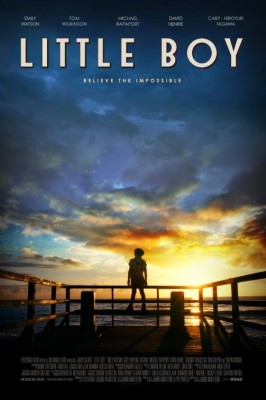 This week was challenging for our family. In a future post, I will share some of the events and emotions attendant to my mother's hip replacement surgery and the two weeks I spent with her in the hospital and skilled nursing facility. To say that I called on my faith regularly to give Mom the support she needed would be a major understatement.

A bright spot in all of the stress was the few hours Mom and I spent together yesterday watching an advance screener of the movie LITTLE BOY. Releasing tomorrow in theaters, this film is one of those rare viewing experiences that is both utterly entertaining and a deep call to action. Here's an overview:

LITTLE BOY is a powerful and moving, utterly unique story that will capture your heart and lift your spirits. Little Boy tells the heartwarming story of a little boy who is willing to do whatever it takes to bring his dad home from World War II alive. The story reveals the indescribable love a little boy has for his father and the love a father has for his son. Set in the 40's, Little Boy is a cinematic classic that captures the wonder of life through the eyes of an 8-year-old little boy.

When you watch the LITTLE BOY, I think you'll agree with me that it's nearly impossible to believe that young Jakob Salvati, only seven at the time the film was created on location in Mexico, was then a rookie actor. While several other actors in the film turn in compelling performances, this story hinges on the convincing portrayal Jakob turns in as "Pepper Flynt Busbee", a boy who is small in stature but huge in heart.

When Jakob's father James Busbee (Michael Rapaport) has to go off to fight in WWII in the place of his son London (David Henrie), Little Boy turns eventually to Fr. Oliver (Tom Wilkinson) for a way to understand how to bring his father home. Fr. Oliver mentors Little Boy through a "list" that combines practicing the Corporal Works of Mercy with befriending a recently released Japanese internment camp prisoner who is hated by the entire community. While I don't want to give any of the beautiful story away, I'll simply share that you and I find ourselves as touched as "Hashimoto" (Cary-Hiroyuki Tagawa) was by Pepper's powerful belief.

LITTLE BOY was the perfect way for me to be reminded this week that faith in God's powerful love is always stronger than we can conceive or understand. You may go out to see this move, as I did, to be entertained and uplifted. But I'd venture to say that if you're watching closely and listening with your heart, you'll leave the theater feeling called to action. The creative team behind this independent film had a vision, a purpose and a belief that they could summon their resources to create a project that would have the ability to touch people's hearts and to move mountains, to make our world a better place.

I believe they succeeded.

Learn more about this movie, rated PG-13 for some mature thematic material and violence, at LittleBoyMovie.com.

"The Biggest Little Farm": Encouragement for Life's Hardest Stuff
Read
GREATER: Film Encourages Moving beyond Limits with Faith
Read
"Do You Believe?" Will Have You Asking Big Questions
Read