Confession: I wasn’t keen on reading Dawn Eden's new edition of The Thrill of the Chaste (Catholic Edition), but an editor asked me to interview her, and I determined that yeah, I should probably read the book to prepare myself. 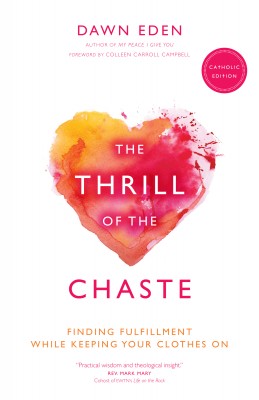 I was NOT prepared for (a) excellent writing that (b) applied to me and that was (c) page-turningly compelling. There’s a reason Eden is a Catholic rock star, huh? (I’m an idiot, yes. But you knew that already and love me anyway.)

Within the covers of this book there’s wrenching honesty and truth that shines through. Eden bares herself, but she doesn’t ever go all TMI the way some chastity writers are prone to do. She’s mature and I suspect that this edition of the book is a different book altogether than the initial book.

Yes, there are men who, while not belonging to religious orders, make private vows or promises of consecrated celibacy, and there are women who do so as well (I am one), including consecrated virgins. But I think if you talked to any one of them and asked, "When did you realize your vocation was to be celibate," he would very quickly tell you that his vocation is not celibacy. Rather, he has a celibate vocation. There is a difference. The difference is that a vocation is a positive call to give your entire self—mind, body, and spirit—in the way that will most glorify God, according to the disposition and gifts that you have been given. (from page 120)

I found myself making notes in the book, rereading sections, and thinking about the book when I was far from it. That speaks to the way Eden writes and engages her readers and her topic: deeply, passionately, colorfully. I couldn't help but hope for the day when I have an opportunity to actually sit down and talk with her, sharing at least a meal (and maybe more than one!), to just share thoughts.

Here's a recent conversation Eden was gracious enough to share with me, not over pasta and wine but through the miracle of the interwebs. Enjoy...and be sure to get yourself a copy of this new copy of The Thrill of the Chaste (Catholic Edition)! 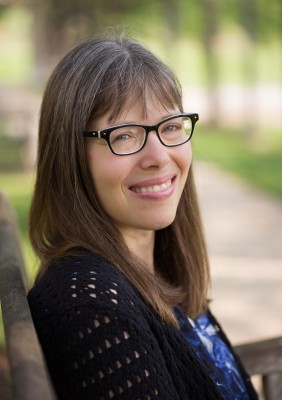 Photo of Dawn Eden by Ron Sartini; used with permission

Dawn, what inspired you to write The Thrill of the Chaste, and why did you feel so strongly about writing a new edition?

When I wrote the original Thrill, in 2005, I was a Jewish convert to Protestant Christianity and was preparing to enter the Catholic Church. By the time the book came out, in December 2006, my experience of chastity had changed significantly. It was one thing to look at Church teachings on human love and sexuality from the outside, appreciating them on an intellectual level, and another thing to incorporate them into my life as a Catholic, aided by the sacraments and the prayers of the whole Communion of Saints.

I’m not saying I wasn’t trying to live chastely when I wrote the original Thrill. I was. But entering into the rhythms of Eucharist and Confession, learning what it meant to live as a member of Christ’s Mystical Body--those things helped me better understand how to glorify God in my body.

So, inasmuch as the original Thrill was meant to express  the wisdom I had gathered in my own journey, the book was already dated the moment it came out. That was one reason I wanted to rewrite it.

Also, I quickly came to regret targeting the original edition of The Thrill to women. Writing the book as a newcomer to chastity, I didn’t feel understood men’s experiences enough to address them on the topic. But as soon as I began giving talks on chastity, men would come up to me afterwards bearing marked-up copies of The Thrill and saying, “We need a book like that for us.” So, when Ave Maria Press asked me to write a Catholic edition of The Thrill, I was delighted to be able to rewrite it for an audience of both men and women.

What appeal will it have for those who already read it in its previous form?

The Catholic edition of The Thrill of the Chaste is really a new book. I did work hard to keep the confessional tone of the original wherever I could, because that was a major part of its appeal. However, the main thrust of the book is no longer about the boy/girl practicalities of single life, because that’s not what most interests the people I have met at my talks over the past eight years.

It’s not hard to find guides to the do’s and don’ts of chaste dating. What’s hard is to find spiritual guidance on how to live in the “now and not yet.”  Single Catholics experience the existential loneliness of being between this world and heaven more so than happily married spouses, so the new Thrill is primarily for them. But it’s also for anyone trying to live the life of faith, whether married or single, because sooner or later we all come to see that no human person can truly satisfy us.

So the question becomes, since sexuality affects all aspects of the human person in the unity of body and soul (CCC 2332), what does my sexuality have to do with my vocation to love? How can I love fully, with body and soul, in the way that God designed me to do so? That’s not just a question for those called to marriage; it’s a question for all of us. And that is what I seek to answer with the new Thrill of the Chaste.

It seems chastity is a popular subject of late. Why do you think that is?

I think that what we are seeing is a gradual realization on the part of Catholics that it is not just youth who need to understand the Church’s teachings on chastity. We all need to know what things like being embodied, being a man or woman, and experiencing sexual attraction have to do with our life in Christ.

In your opinion, how does chastity fit in with living an integrated Catholic life?

That’s an easy question to answer, because the Catechism itself describes chastity as vital to living an integrated Catholic life: “Chastity means the successful integration of sexuality within the person and thus the inner unity of man in his bodily and spiritual being” (CCC 2337).

In the Catholic edition of The Thrill of the Chaste, I use a definition of chastity that highlights this integration: chastity is the virtue that enables us to love fully and completely in every relationship, in the manner appropriate to the type of relationship. So, in the relationship of marriage, chastity includes what the Church calls the marital act -- sexual intercourse -- but it also includes faithfulness and recognizing that your spouse is not your plaything. For a single person like myself, chastity means loving fully and completely in the manner of a daughter, or a sister, or a friend. For everyone, it means bringing Christ to others and seeing Christ in them.

Why do you think it’s particularly important for Catholics to read your book?

As someone who has sought out a lot of chastity literature, I would say that most of it falls into one of two camps.

First, there are the dating manuals that give the nuts-and-bolts of saving sex for marriage. Those may be helpful for teens, but if you’re an adult reader, they can drive you to despair, because they they give the impression there is no hope of redemption for those who have crossed the line.

Then there are the books by authors seeking to interpret St. John Paul II’s Catechesis on Human Love, popularly known as the theology of the body. Those can be instructive for adults, but their tendency to read sex into everything John Paul said can leave one wanting to take a bath.

In The Thrill of the Chaste (Catholic Edition), I do draw heavily from John Paul’s teachings, because they are important and they speak to modern readers. So you could say that John Paul is a theological model for me.  But when it comes to my literary models, I take after Augustine’s Confessions and Venerable Archbishop Fulton J. Sheen’s Three to Get Married.

What I really like about both Augustine and Sheen is that they resolutely refuse to isolate discussion of sexuality from discussion of the whole of the Christian life. They don’t dwell on superficials -- the nuts and bolts -- but at the same time, they don’t take an overly spiritual approach to discussions of sexual desire. They are writing for real people with real questions about how to find joy and peace as chaste Christians. We need authors to take up their approach today, and I hope I have accomplished that.

I’m really gratified to hear that the book resonated with you.

My intended audience is people who suffer from existential loneliness, something I have experienced for as long as I can remember.

During the few years after I became Christian but before I was Catholic, I thought that my existential loneliness was something I would lose once I became more surrendered. The hole I carried in my heart -- that longing for someone to understand me and love me as no human being could -- seemed to me to signify I was not holy enough.

Living as a Catholic and studying the Catholic faith -- especially Augustine -- has shown me that existential loneliness is not a sign that something is wrong. It’s a sign that something is right. We are supposed to have a God-shaped hole in our heart. What’s wrong is to beat up on ourselves for not finding total satisfaction in this life, or to try to fill that hole with things that are not God.

So, my hope is that readers will come out of The Thrill of the Chaste with a deeper appreciation of how their existential loneliness is the empty space God wishes to enter into. Once we appreciate that, we are able to bring divine love into all our relationships. That is the real thrill of the chaste.

Purchase The Thrill of the Chaste (Catholic Edition) and support CatholicMom.com without paying anything extra.

Photo of Dawn Eden by Ron Sartini; used with permission