Welcoming The Stranger: A Fable 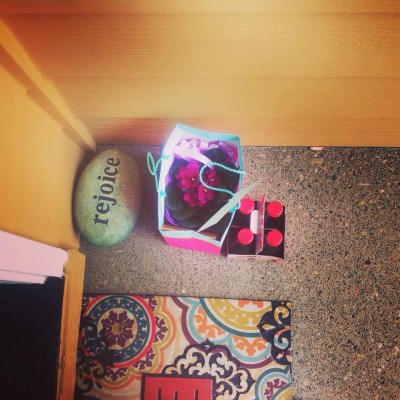 So shines a good deed in a weary world. -Shakespeare

Once upon a time, there was a harried wife and mother named Lily who was terribly, horribly overdone. She had, I'm sorry to say, brought heaping spoonful upon overflowing wheelbarrow-ful of additional work squarely upon herself, and had quite reached a point of exhausted desperation.

You see, Lily's village had been unceremoniously dismantled the previous Fall, leaving her family to journey to a far-away place that looked like home but most definitely was not, either in feel or in function. Lily was fatigued, unsettled, and most of all, lonely. Excruciatingly lonely.

Upon arriving in the new village, Lily resignedly waited for the women of the community to appear at her doorstep to welcome her and her brood with the enthusiastic hospitality and offers of friendship and mutual support she had so enjoyed in the old village. She herself made a few feeble attempts at reaching out to a few women down the lane, and in the marketplace, and in the churchyard, but, still tired from her long journey and admittedly out-of-sorts from the myriad successive changes in her circumstances, Lily was unable to make much headway on her own.

After nearly three months of attempting, inquiring, and waiting, everyone still seemed quite occupied with his or her own duties and amusements, so Lily decided to take matters into her own hands. Rather than wait another moment for people to come to her, Lily decided to systematically fill every nook and cranny of her time with good deed upon good chore upon good task upon good project for the community until people noticed her goodness and came to her door with offers of friendship and goodwill.

Lily began to take up a neighbor's laundry, even though she loathed the chore. She took in four abandoned puppies to get them out of the farmer's barn even though their puppy fur made her sneeze uncontrollably. She meticulously cared for her other neighbor's yard and home after he was called away on business abroad. She made meals for the pastor, even though he had a housekeeper perfectly capable of the task. Soon enough, people began noticing Lily. However, the noticing lasted merely long enough to become more asking: "Can you watch my boy every Tuesday while I go to market?" asked a neighboring mother. "Will you wash and press the church linens?" asked the parish marm. "Will you arrange the town bazaar next month?" "Will you ... will you ... will you?"

Yes after yes after yes came from Lily's mouth ... and yet ... she had never felt more empty or depleted. With the duties came some contact with potential friends, but no real bonds were forming - no real relationships forged - she was so busy; she hadn't the time. And still, she pressed on.

"If only I complete this task for this worthy cause," she would fret to herself, "I will become valuable. I will be worthwhile. I will be seen and known and desired. And then people will love me."

Lily was ever more neglectful of her own home and husband and children as she strove to complete deed upon task upon project upon chore for the community. And as she toiled on, the heaping spoonful and overflowing wheelbarrow-ful of activities turned into burdens too difficult for any reasonable person to bear. And, finally, one day, Lily came to a point that she was so overdone that no good thing could come from her at all.

She continued as she was able, slowly drowning in a sea of despair and emptiness.

Until, finally, one day, someone saw.

While gathering provisions from the marketplace, Lily haphazardly mentioned to a fellow villager in passing that her husband had been away on a hunting trip, and she worried that she wouldn't be able to keep up with her many tasks. The other villager murmured some words of consolation, Lily sighed deeply and smiled weakly, and the two women went their separate ways.

Later that night, after the rest of the household was fast asleep and Lily's eyes were nearly glued shut from unanswered sleep, she heard a quick knock at the door. Startled and disoriented, Lily lay her needlework project down, and carefully approached the door. Upon opening it, and realizing no one was there, she looked down to see the most beautiful bouquet of flowers she'd seen in a long while, accompanied by a small satchel that, by the look of it, contained rare chocolates from the small exclusive shop in the next town over. A jar of red wine and a small note were included. Lily strained to read the words:

"My dear friend," it said. "I am so sorry it has taken me so long to reach out to you. I have wanted to get to know you better, but you seemed so terribly busy and tired - I didn't want to be a burden. But seeing you in the marketplace today and looking into your eyes, I finally realized what was going on. It is my belief that you have somehow forgotten that you are a human being, not a human doing. You are exquisitely loved for who you are and not merely for what you do. I hope that these small tokens remind you that you are seen, you are loved, and you are known. Perhaps we can get together tomorrow for a cup of tea." And it was signed, "With love and prayers, your Fairy Godmother."

Lily, who had begun to believe that life was a drudgery and a chore and a burden, clasping the precious note in her hand, sunk to the floor and cried deep sobs of relief and gratitude. Someone saw. Someone knew. Someone cared.

So, what was to happen to our overworked protagonist at this juncture? Well, I am happy to report that, after the last tear fell, she dried her face with the back of her worn hand and her tattered apron, and popped a chocolate in her mouth and relished the entire thing. Next, she put her needlework away for the night and drifted off to sleep, all the while dreaming about preparations for the next day. It was finally time to make room for company.

Heather Anderson Renshaw is a wife, Mama (x5) and on-fire Catholic revert. She’s a national speaker, author/writer ( Death By Minivan, Real Catholic Mom,  All Things Girl: Truth For Teens, Take Up And Read), nap-craver, kitchen dancer, minivan singer, coconut milk latte drinker, and laundry avoider. Heather prays all may experience the healing power of Divine Mercy so they can rejoice and be free.