Laying down one’s life: the decision to adopt a special needs child—a conversation with Allison Gingras, host of “A Seeking Heart” on Real Life Radio

“This is my commandment, that you love one another as I have loved you. No one has greater love than this, to lay down one’s life for one’s friends.” John 15:12-13

In this new commandment Jesus took “love your neighbor as yourself” several steps further. Now love involves sacrifice. His greatest demonstration of this commandment was his death on the cross. But because he was willing to sacrifice his life, he rose again to new life in a body glorified. 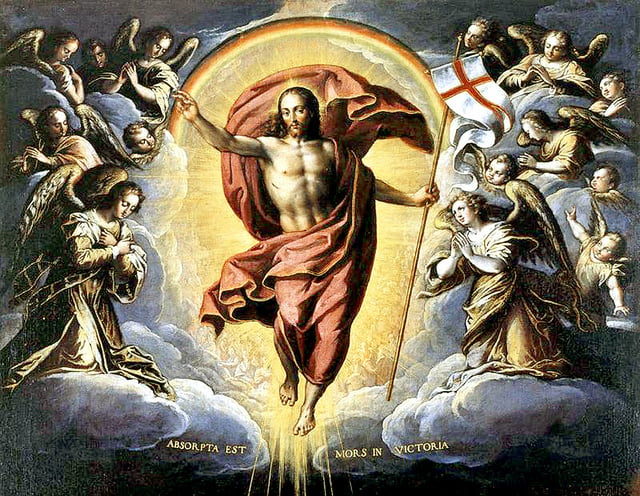 This is the love he requires from us. It’s a radical love, a sacrificial love.

Recently I had a chance to hear fellow Catholicmom columnist and radio talk show host Allison Gingras describe a way.

Speaking at the Springfield Women’s Conference in late April, Allison told the story of how she and her husband Kevin were led to adopt a three-year-old deaf child from China. This adoption involved preparing their two sons (one of whom was reluctant) for a new brother or sister. It entailed a three-year wait followed by a grueling sojourn to China by parents who were homebodies. Their lives would be transformed by the arrival of this child in ways they could never imagine.

In essence, the entire family laid down their lives in order to welcome its new member.

What does it take to make such a life-changing decision? How does one prepare to lay down one’s life in this manner? I recently corresponded with Allison and asked her to describe the experience of adopting their daughter, Faith.

What made you decide to adopt?

In 2006 Kevin and I were at a Steven Curtis Chapman concert. Since he had adopted 3 girls from China, his concerts were used to raise awareness and money for adoption. We had been discussing having more children but were unsure. We had 2 boys, but both had been preemies and I had suffered 2 very difficult losses between. Though I could get pregnant, we were unsure if God was calling us to increase our family that way. At the concert it was clear as day ... God was calling us to adopt. 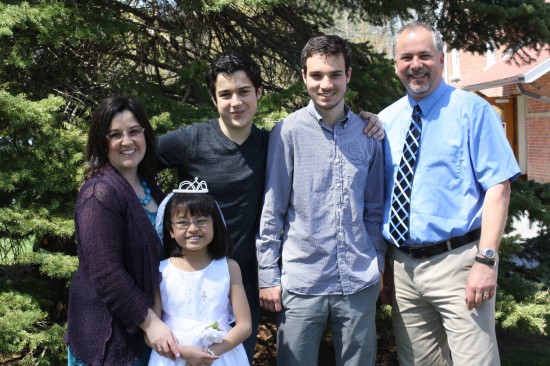 Was there a particular song you heard or something specific that Chapman said that made it clear what you were supposed to do? Describe the "ah-ha!" moment.

I would say during his singing of “Cinderella.” He was playing a video in the background of him dancing with his daughters. There was this nudge in my heart that I couldn't put words to until I walked out into the lobby only to find a table with information on Chinese adoption. I knew the minute I saw it that God was sending me a sign a call to adopt!

What made you decide to adopt a special needs child?

Everything came to me in prayer, especially during my time in adoration. We had 2 healthy boys, and wanted to adopt a child some people might have considered 'unadoptable.' I felt particularly drawn to a child that was deaf. I had always loved American Sign Language and had even told my mother when I was in 8th grade that I wanted to parent a deaf child. While I was ready to accept the special need, God had to work a little harder on convincing me to accept a 3-year-old. I wanted a baby - a real chance at a 'do-over' in parenting!

Describe your process in accepting the idea that you were to adopt a three-year-old versus a baby - what did you struggle with and how did you finally reconcile with the idea?

I was sitting on my couch with my Bible and rosaries, saying my evening prayers. As I contemplated the adoption and all God had already done to bring it to fruition, I was suddenly struck with this undeniable thought, that He was sending us a three-year-old. I started to cry, no, bawl, and beg for him to reconsider. By the end of that prayer moment with God, he had convinced me that an older child was a much better fit for our family. Later I learned my then ten-year-old had been praying for a preschool-aged sister so that he could have some years with her at a 'playable' age. He longed to be a big brother to a little sister and didn't want to wait for her to be able to play!

How did your younger son react to the decision?

Adam was not so open to this new family member. He wasn't keen on giving up the 'baby' status, being seven at the time. He was ten when she finally came home as it was a three-year process/wait for her. Adam did warm up to it over time - and he was the second person (after her Dad) that she bonded with in the family!

Describe what it was like to wait so long - were you aware at the start that it would take three years? Did you know anything about the child you would be adopting before you flew to China? And what helped Adam to warm up to the idea?

I did a lot of crying and praying. However, in the end, I know God used that time to bring all us so close to him. I had to accept that there were many other people involved, and I had no idea what they all needed in this process. Perhaps God was keeping her with her loving Chinese foster family a little longer because their hearts were breaking at saying good bye. It also gave my family time to prepare emotionally for her arrival, Adam warmed up over time when we were able to assure him he'd not be replaced. He matured a lot during that time and we were sure to give him lots of extra love and attention. 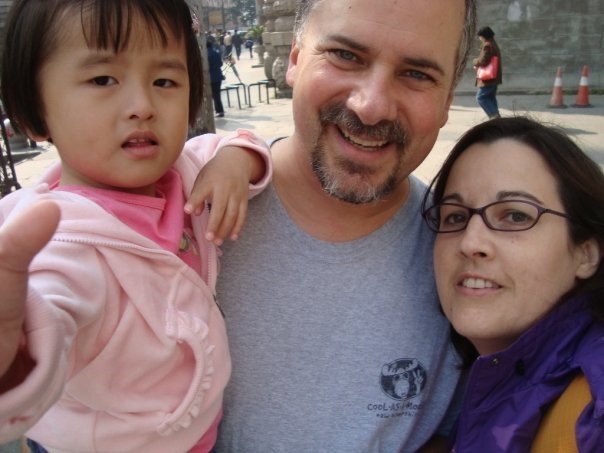 Faith with her new parents, Kevin and Allison Gingras.

What did God supply to equip you with the courage you needed to make that epic trip to China?

Grace, through prayer and time spent in adoration. I had some incredible experiences of intercession from St. Therese of Lisieux and St. Faustina. Also, I spent a lot of time in scripture and felt God spoke to me, encouraged and strengthened me in his Word.

Describe one of your intercessions from St. Therese and/or St. Faustina that gave you the courage to go. 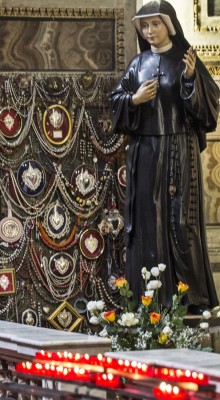 Here’s one from St. Faustina: I was having a particularly difficult night waiting for our okay to travel. I had been worried about a great many things - if we'd be able to give her the best care, language access, the transition. The doubts were heavy and people were not really helping me feel better. I went to Jesus in prayer and then picked up St. Faustina's diary. I opened to a 'random' page and found these words (paraphrased) – “You are right, you are misery itself. ... Do what you can, and I will do the rest.” I loved that first Jesus agreed, and then reminded me that he was with me, and thankfully in complete control.

Why did you feel you needed a "do-over" with a new child?

Because I raised my other two without having a solid faith. I had bouts of depression, self-absorption and anger, all of which souring some of our precious toddler/preschool time, and I wanted it back to so as not make those same mistakes again. My boys tell me I'm crazy, that they loved their childhood and me, but I know that I could have done a better job - been more attentive, prepared them better for school or in our homeschool. Mommy guilt, it is a terrible thing. I am not sure why we mommas do this to ourselves. God obviously didn't think I needed a do-over - or at least that is how I took him sending me a 3.9-year-old.

Have you gotten over your Mommy guilt? What would you recommend to other mothers with regards to this problem?

Mommy guilt. I would like to say I have completely kicked this bad habit, but alas I still have my moments of “coulda, woulda, wish I hadda – but.” The more my faith grows, and my Faith grows (as well as my boys), I see that I did the best I could at the time. I cling to the promise from Romans 8:28 that “all things work together for good for those who love God, who are called according to his purpose.” Well I'm pretty crazy about him so I am optimistic he'll make the best of what I was able to give. After all he loves them infinitely more than I do; he gave them to me in the first place :)