Fatherhood: A Vocation of Love

Editor's note: As Father's Day approaches, we're happy to honor our husbands and fathers who have helped us and our children to grow in faith. John Clark's guest post today focuses on the father of a saint--who will himself be canonized this fall! --Barb 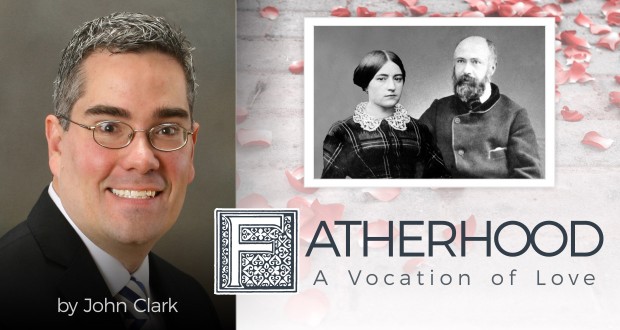 Almost two centuries ago in France, a little boy named Louis Martin felt drawn to the religious life as he grew up. He was a happy child who benefitted from witnessing his father’s deep love for the Catholic Faith. Though he apprenticed as a watchmaker in his late teens, Louis did not forget his dream to devote his life to God through the religious life. Over the years however, for various reasons including illness, his efforts to pursue a vocation failed.

Though for much of his life he did not consider marrying, in his mid-30’s Louis went for a walk, and encountered Zelie, a woman who would soon become his wife. His wife would later comment that when she saw Louis, she heard a voice inside her that said: “This is the husband I have destined for you.”

Coincidentally, Zelie also had wished to pursue a religious vocation but had been unable to do so. However, the couple decided that they would serve God through their love for each other, and their love for their children. They would take on a new vocation together.

The couple would go on to have nine children, but tragically, four of them died in infancy or childhood. However, five of their children—all girls—survived into adulthood. Louis proved to be a warm and gentle father who not only provided a wonderfully happy home for his family, but made an impression on his daughters of the idea of a loving and compassionate God.

Both Louis and his wife were hard workers who ran businesses together yet always devoted time to adore God, go to daily Mass, and care for the poor. Louis always found time for his daughters, not the least of which was his youngest, who seemed like a delicate “little queen.”

Sadly, Zelie contracted cancer and died when her youngest daughter was only four years old, leaving him with the task of raising the girls. Though he missed his wife terribly, he succeeded admirably as a loving father, guiding his daughters by the hand through the Christian life.

Louis knew that this would leave him, in many ways, alone in the world. But he also knew that his children were merely loaned to him from God, and he had the humble confidence in God to know that the final destination of his whole family was one they would share together forever. After his daughter announced her desire to become a sister, Louis responded to her: “Come, let us go together to the Blessed Sacrament to thank the Lord who has given me the honor of taking all of my children.”

After a series of health problems, Louis died several years later. Louis had done a wonderful job as a husband and father. He had sacrificed and suffered for his wife and children, been overjoyed with them, and had shared a deep love of God with them. Few men in history have lived the vocation of husband and father as well as Louis, which is perhaps even more amazing considering that he first desired a different vocation.

Though Louis’ story is known in some corners of Christendom, it will be proclaimed to the world this October, when he and Zelie will be canonized together by Pope Francis. And it will not be the first time that their family name will be raised to the altar. As it turns out, Louis’ youngest daughter was named Therese Martin, whom the world now knows better as Saint Therese of Lisieux.

Saint Therese—Doctor of the Church, answerer of countless intercessions, the “Little Flower” who promised to spend Heaven doing good on Earth, the little saint who answered a prayer for this writer’s wife about whether to marry him—was the daughter of a wonderful father. In the Providence of God, Therese’s vocation was made possible by her father’s vocation.

As Louis Martin taught us, fatherhood is not an easy vocation, even if you have the most wonderful children. Fatherhood takes mental toughness, physical perseverance, emotional stability, and spiritual passion. It demands sacrifice, humility, hard work, and dedication. It requires courage, patience, wisdom, and understanding. But far above these, it requires love.

As Pope John Paul II wrote years ago: “Love is therefore the fundamental and innate vocation of every human being.” And the life of a good father personifies that love. What a beautiful reminder for us on father’s day. For us fathers, as Blessed Louis illustrated, love is our vocation.

About the author: John Clark is a graduate of Christendom College and holds a degree in Political Science and Economics. He has written scores of articles about homeschooling and is a popular speaker at family and homeschooling conferences. In between speaking and writing, he has found time to serve for several years as the coach of the Christendom College baseball team, and to raise his nine children with his wife, Lisa.
Article and image reprinted by permission from Seton Magazine.com.