Editor's Note: We're excited to share the news of Matthew Kelly's newest book, Rediscover Jesus, which invites readers to a new beginning in their relationship with Jesus. It's available for preorder now and will be delivered in August. --Barb 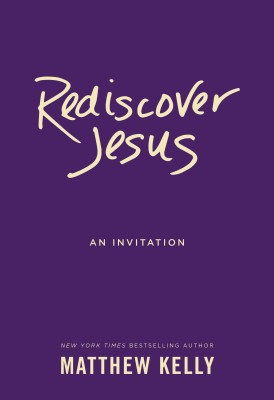 The Dynamic Catholic Institute is excited to announce the hardcover release of Matthew Kelly’s newest book Rediscover Jesus. The book, which inspires readers to encounter Jesus in an entirely new way, is the sequel to Kelly’s 2010 Rediscover Catholicism, which has sold seven million copies.

“If there is one person we should each get to know in a deeply personal way, it is Jesus,” said Kelly, Dynamic Catholic’s founder and New York Times best-selling author. “We are constantly grappling with life’s toughest questions: Who am I? What am I here for? What matters most? What matters least? Jesus is the amazing friend who is going to help us answer those questions,” he added.

“We never imagined these programs and [Matthew’s] books would have such an impact,” said Mark Moore, Dynamic Catholic’s Director of Ministry. “We already have people signed up for Best Lent Ever 2016! Rediscover Jesus, which can be read as a 40-day spiritual journey, is a perfect way to integrate the habit of daily prayer during the 40 days of Lent, and beyond,” he added.

Another game-changing Dynamic Catholic program is the Parish Book Program, which the organization began in December of 2007 by giving away fifty thousand copies of Rediscover Catholicism to fifteen parishes. This Christmas, Dynamic Catholic will offer Rediscover Jesus as one of the program’s featured titles. Since its inception, the program has served more than 4,000 parishes in the United States, distributed millions of books and CDs, and brought more people back to the Catholic Church than any other program in America.

“Books change our lives,” said Kelly. “Most people don’t know how to have a great relationship with Jesus; they’ve never encountered him. [Rediscover Jesus] will change that,” he added.

You can pre-order a copy of Rediscover Jesus on either Amazon.com or BarnesandNoble.com. Readers who pre-order the book by August 16, 2015, have the opportunity to enter to win one of several prizes, including an all-expenses-paid trip to Italy with Kelly and those going on the Dynamic Catholic Pilgrimage to Rome this November. Anyone who pre-orders the book will have access to an exclusive webinar with Kelly, during which he will talk about his writing process, why he decided to write Rediscover Jesus, and why he thinks this is the most important book he has ever written.

For more information about Rediscover Jesus or to pre-order a copy of the book, please visit DynamicCatholic.com/RediscoverJesus.

Dynamic Catholic is dedicated to re-energizing the Catholic Church in America by developing world-class resources that inspire people to rediscover the genius of Catholicism. The non-profit organization is passionate about helping Catholics and their parishes become the-best-version-of-themselves®.

Support the work we do at CatholicMom.com by purchasing Rediscover Jesus through our affiliate link! You pay nothing extra!