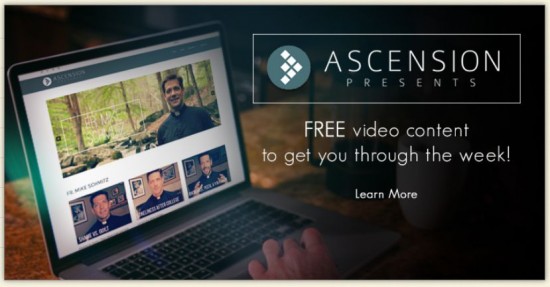 Maria Mitchell, the producer of Ascension Presents, says the Church has a great responsibility to reach young people through media. “My generation spends enormous amounts of time on our phones and tablets. It’s where we engage, it’s where we share, it’s where we learn, and like it or not it’s where we are formed,” Mitchell said.

Ascension Presents features video content that will bring entertaining, faith-filled, and dynamic Catholic presenters to social media feeds and email inboxes. Using high-end video production quality and significant, relevant topics, Mitchell hopes the videos will be an opportunity for young people to encounter the Gospel message throughout the week.

“Video content is so dominant right now. It’s the most alluring, it’s the easiest to consume and is a unique opportunity to present beauty, truth and goodness in truly powerful way,” Mitchell said.

Father Mike Schmitz, nationally known speaker and Director of Youth and Young Adult Ministry for the Diocese of Duluth, hosts his own channel on Ascension Presents. His weekly commentary on news, pop culture and conversations about the joy and challenges of living the faith will especially resonate with young adults.

Saint John Paul II once said, “The question confronting the Church today is not any longer whether the man in the street can grasp a religious message, but how to employ the communications media so as to let him have the full impact of the Gospel message.”

“We hope Ascension Presents will do just that,” said Mitchell.

Ascension Presents is an extension of Ascension Press whose mission is to provide the Church with effective and engaging Catholic faith formation resources.