This Calls for a Celebration! The Assumption of Mary 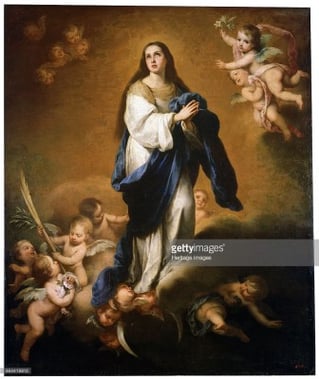 In Mary’s Assumption we see the eschatological finale awaiting the Church, of which she is the icon. Big words that mean that for anyone who loves someone, this is a celebratory day! The feast days of the Church are not just the commemoration of historical events. They look to the present and to the future and give us an insight into our own relationship with God. The Assumption of Mary looks to eternity and gives us hope that we, too, will follow Our Lady when our life is ended. Brian Cross, a convert to Catholicism, says this dogma is a “great antidote to materialism and the moral corruption that follows despair, because in Mary’s Assumption into heaven we see our own glorious destiny as fellow creatures like her, united to her Son”[1]

As I consider Mary’s Assumption I think of the Communion of Saints as such an amazing gift! My younger brother Gregory died on July 23rd on the feast of St. Charbel.[2]  This was not just a coincidence. Gregory wore Chabel’s relic because St. Charbel insisted on being with Gregory. I heeded Chabel’s message after he “requested” to come with me three times on my journey to be with Gregory. First Sr. Mary Thecla mentioned Charbel’s name, then a prayer icon of Charbel fell out of a book, and finally his relic fell out of my bible. The saints are with us on our journey to be with them.

Brian Cross realized that once he had accepted the place of the saints in the Church, it was much easier to understand Mary’s role as one of the saints. "If devotion to the saints in general is acceptable, then how much more so devotion to the Theotokos?” he wrote. St. Thomas Aquinas calls this super-devotion (hyper dulia).  Brian attributes deepening his devotion to Cardinal Newman’s famous essay on Mary. In this essay he points out that “the fundamental Patristic doctrine on Mary was that she was the second Eve….this was the teaching of Justin, Tertullian, Ephrem, Ireneaus, Cyril, Epiphanius, Jerome, and others….To the fathers…it was obvious that Eve must have her counterpart in the work of redemption. Next to the second Adam, there must be a second Eve. Thus, Eve’s No was undone by Mary’s Fiat mihi. From the doctrine of the second Eve, furthermore, all the other Mariological doctrines flow – her preservation from original sin, her virginity, and even her assumption. Mary is the prototype of the Church, the woman ‘clothed with the Sun,’ who enjoys and figures proleptically the fullness of the redemption of the whole Church.” 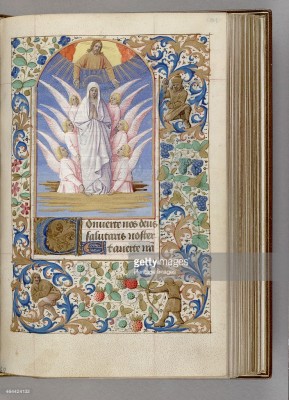 Mary is a saint who already experiences heaven body and soul. She embodies the promised resurrection. We will also rise as she has, our body reunited with our soul. At the resurrection of the dead we will physically be with our loved ones. This is a cause for celebration!

“Rejoice this day, you who believe! Set aside your doubt and fear, you who do not believe! Our Lord Jesus Christ did not leave his blessed Mother to see corruption, but raised her up to Heaven, to take her place at his right hand. Rejoice, Enoch and Elijah, you holy men who prefigured the perfect work of salvation accomplished in Christ for man, and brought to fruition in Mary, Daughter Zion, Mother of the Church, Queen of Heaven, the pure Ark of the Covenant, who bore within her body the Glory of Israel, the Salvation of the world! Mary’s Son has lifted her up, body and soul, into the glory of Heaven! The Queen of Heaven is at the right hand of the Lord of Glory, arrayed in the gold of the Sun!”

From the Liturgy on the Feast of the Assumption 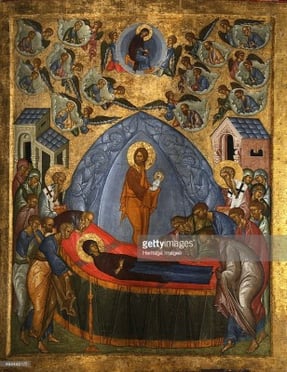 Icon of the Dormition of the Virgin Mary

The Feast of the Assumption is the oldest feast of Mary. It has been celebrated in the universal Church (both East and West) on the same date, August 15, since the sixth and seventh centuries. In 336, when sacred Christian sites began to be restored, the remembrance of Jesus’ mother centered around the empty tomb of Mary, close to Mount Zion, as the place of dormition. This event was celebrated in Palestine and then extended by the emperor to all the churches of the East. In the seventh century it was celebrated in Rome under the title of the “Falling Asleep” or “Dormitio” of the Mother of God. Eventually the name was changed to the “Assumption of Mary,” since there was more to the feast than her dying.

The ancient belief, dating back to the apostles themselves, was that Mary was taken up into heaven. There were no relics of Mary to be venerated so the empty tomb where she had been buried became a place of pilgrimage. Today, the Benedictine Abbey of the Dormition of Mary stands on the spot.[3] 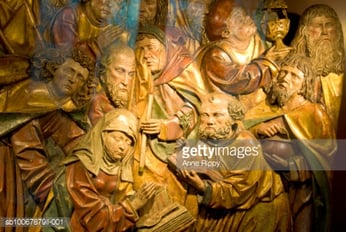 The Dormition of Mary with the Apostles and Disciples

At the Council of Chalcedon in 451, when bishops from throughout the Mediterranean world gathered in Constantinople, Emperor Marcian asked the Patriarch of Jerusalem to bring the relics of Mary to Constantinople to be enshrined in the capitol. The patriarch explained to the emperor that there were no relics of Mary in Jerusalem that “Mary had died in the presence of the apostles; but her tomb, when opened later . . . was found empty and so the apostles concluded that the body was taken up into heaven.”

In 1950, in the Apostolic Constitution Munificentissimus Deus, Pope Pius XII proclaimed the Assumption of Mary a dogma of the Catholic Church in these words: "The Immaculate Mother of God, the ever-virgin Mary, having completed the course of her earthly life, was assumed body and soul into heaven."

Mt 27:52-53 The tombs also were opened, and many bodies of the saints who had fallen asleep were raised, and coming out of the tombs after his resurrection they went into the holy city and appeared to many.

Here are some ways to celebrate this ancient and meaningful feast.

Roman Ritual: Blessing of Fruits and Herbs on the Assumption of the Blessed Virgin Mary This blessing comes from Germany, and formulas for it are found as early as the tenth century. The blessing of herbs was reserved only to the feast of the Assumption. This ancient use came to be associated with the Blessed Virgin Mary, in part because of the biblical images applied to her such as vine, lavender, cypress and lily, partly from seeing her in terms of a sweet smelling flower because of her virtue, and most of all because of Isaiah 11, 1, and his reference to the "shoot springing from the side of Jesse", which would bear the blessed fruit of Jesus.

Feasting for the Assumption has some ideas for incorporating fruits and herbs in celebratory dishes. I am leaning toward the Fluffy Cloud Dessert.

Early homilies given on this feast.

On the Dormition of Mary: Early Patristic Homilies

The Ancient Traditions of the Virgin Mary’s Dormition and Assumption

Mary and the Fathers of the Church: The Blessed Virgin Mary in Patristic Thought