Are you a Eucharistic Minister? 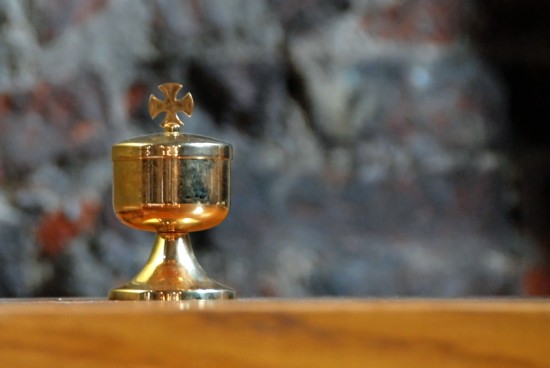 I was asked that question on Super Bowl Sunday this year. I looked at the Sacristan and said no. I knew why he asked; you see, my husband has been training to be a Sacristan with this gentleman. My husband is a Eucharistic Minister, so naturally, I guess, people think the wife is too.

I won't lie; I had thought about it when my husband signed up to train. I thought about it again when he was being trained. I even thought about it more when my son and I received Communion from him the first time. But did I do it? No. No, I did not. Why? I honestly can say I was scared. My husband never pushed me to do it. I knew that the church was short Eucharistic Ministers at certain Masses. Yet I sat in a pew Sunday after Sunday and watched as the Sacristan scrambled to find EM's.

I began to pray about it. It was a process; it honestly took me months to finally approach a Deacon's wife and ask about training. I gave her my number, continued to pray and wondered if she would call. Then the call came; then the Sacristan approached and told me about a meeting to attend. My husband asked me if I had heard of the meeting and asked if I was planning on going. I finally told him that I had been praying about it and was waiting for the call and I had gotten it.

I attended the meeting, attended training, submitted the application and documentation required by the Los Angeles Archdiocese. In training I met a beautiful soul; this lady was always in Mass and I made a new friend. We were told we would be put on a schedule; well, the next Sunday in Mass here comes the Sacristan; he tells my husband, "Make sure to tell her we need her today." That was three weeks ago.

For three weeks I have been fortunate enough to serve. The feeling is overwhelming, I have wanted to cry as I give the Body of Christ to my brothers and sisters. Holding Jesus is so humbling, and I have caught myself thinking of the moment I was handed the ciborium and the emotions I felt.  The entire feast is so powerful; we are a beautiful Church.

I must say that my husband and I have only been in the parish for three years. In those three years we have been welcomed with open arms. Our family is slowly but surely becoming more involved, being welcomed and accepted has motivated us to do more than just sit in a pew every Sunday.

Our son sees us involved, my husband in St. Vincent de Paul, Sacristan, Eucharistic Minster and helps with Baptisms. Myself as in Religious Ed and now Eucharistic Ministry. He has asked if he maybe able to do those things when he's older; this warms my heart. Yes, you can or you can serve in something that will suit you. Being in church, praying and trying to live the faith has honestly made me so much happier and I feel peaceful. I have learned to let things go. God's will be done, not mine.

There is something to be said for a church who welcomes it members and opens opportunities to them. I think we have found a home.