Me 'N' Jesus Hate That You Hate Pope Francis 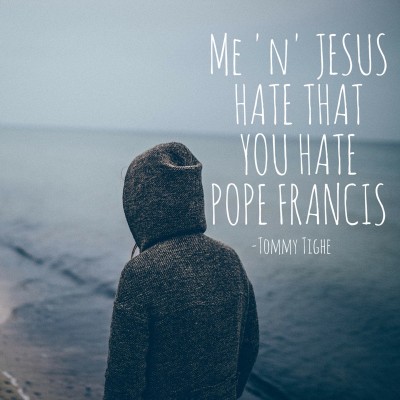 Truth be told, I have only lived with three popes.

When I was born, St. Pope John Paul the Great was already 4 years into his pontificate, and I can't remembering ever hearing a bad word about him (of course, there wasn't Twitter and Facebook back then...).

While people may have moaned and groaned from time to time during Pope Benedict XVI's pontificate, they didn't seem to make a hobby out of picking apart his every word.

And then, we have Pope Francis.

Perhaps it's because I'm more plugged into the Catholic media scene than I was previously, or perhaps it's because there are more outlets for people to widely express their views, but the negativity that many Catholics send Pope Francis' way has finally bubbled over for me and I just can't keep it in anymore.

From the moment he walked out onto the balcony overlooking St. Peter's Square, the haters came out in full force.

From "he wasn't wearing the proper attire," to "he shouldn't have asked for everyone to pray for him," the comments I heard about our new pontiff were disheartening to say the least.

And it has gotten much worse since that day in March of 2013.

From the "Who am I to judge?" comment, to the foot washing of a female prisoner on Holy Thursday who happened to also be a Muslim, to the letter to an atheist, to the comment about Catholics needing to stop focusing too much on single issues like abortion and contraception, to his seemingly negative stance on Capitalism, to his focus on the negative human impact on the environment, to the comment about Catholics not needing to breed like rabbits, to the seemingly neverending flow of unfiltered "off the cuff" remarks, and on and on and on.

Pope Francis has certainly got the hair on the back of certain Catholics' heads standing at attention.

And yet, he has also gained the attention of many people who, until recently, felt that the Church was outdated, irrelevant, and unimportant.

And that is exactly what makes the anti-Francis crowd within the Catholic Church so maddeningly frustrating.

People who haven't been close to the Church in years have all of the sudden found themselves listening to what the Pope has to say. They are interested, and that is the first step in moving them back to the fullness of truth! And yet, when they log into the Catholic Twitterverse (or whatever the Facebook equivalent of the Twitterverse is) they quickly run into very prominent members of the Catholic media complaining about the Pope making "yet another damaging remark about our tradition, history, or our fill-in-the-blank."

When prominent, and even just ordinary, Catholics post tweets, blog posts, and Facebook statuses criticizing Pope Francis, it does absolutely nothing to bring the Body of Christ closer together. Instead, it serves as a divisive tool that actually pulls the Body of Christ further apart.

Now, I'm sure many will hit the comment boxes hard, explaining to me that Catholics in good faith have a right to question the Pope (his actions, words, and motives) whenever he isn't speaking infallibly. Catholics in good faith don't have to agree with everything the Pope says or does, unless he is exercising that speical grace given to the Church by Jesus Christ.

To those interested in pointing out this obvious fact, can I just get ahead of you and say that I understand and agree?

And yet, we Catholics can never lose sight of the fact that there is something special about the office of the successor of St. Peter. Even if one may disagree with Pope Francis' stance on any particular issue, we should disagree with the same respect we would give to St. Peter himself. We can't quote one sentence out of a speech, turn it into something other than what Pope Francis meant, and then obsessively complain about it with an onslaught of negative tweets.

I guess I'd like to ask all those flexing their right to disagree with Pope Francis one simple question:

What is it that you have such a problem with?

I'm sure if Pope Francis said something like that, a lot of people would be pretty upset.

After all, Jesus said the same thing in Luke 5, and we all know how the righteous of His day felt about Him.