The Queen of Heaven and a Little Princess 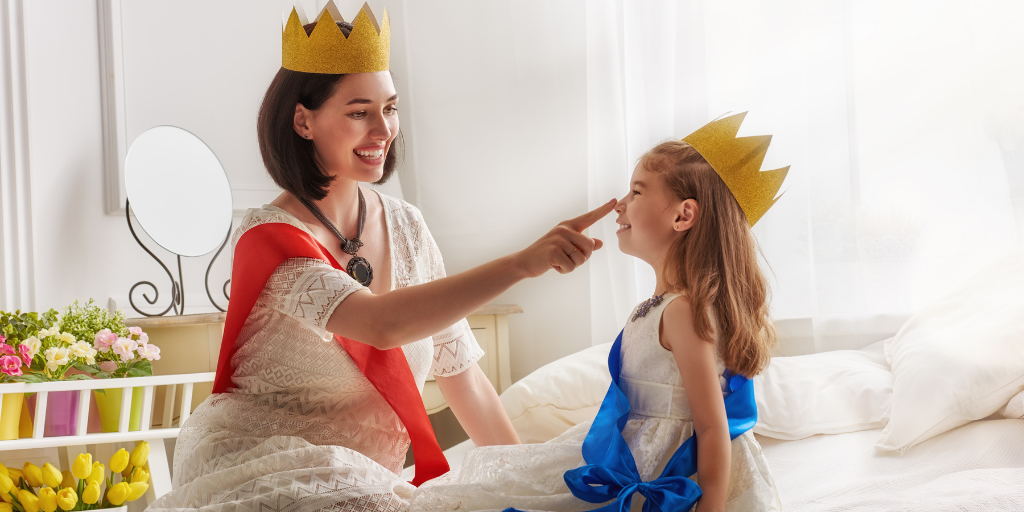 Maybe, Sarah Reinhard reflects, Mary doesn't have a sparkly crown, but rather an apron filled with goodies. She reflects on Mary as Queen of Heaven and on her own role as godmother.

She was a tiny, wrinkled little thing. But she was beautiful, in that glowing, still way that newborns have. Maybe she wasn’t glowing; her mother was. And after holding her, so was I, though I am not -- have never been -- a baby person in any sense of the phrase.

I gazed at her, and I thought of her birth. She was a miracle. Her mother had struggled in some unique (to me) ways and experienced a sense of loss when her home birth just didn’t work for safety reasons.

And yet, here she was, healthy and in my arms, and born on the feast of Mary’s queenship.

It was a feast I only knew about because, having heard that my friend was in labor, I looked up the day’s patrons (call it an addiction, but I need to know whose patronage the children in my life fall under). I was shocked that it was a Marian feast day; I had never heard of it and it was the day before my husband’s birthday.

Throughout her pregnancy, my friend experienced a great deal of anguish and trouble. She grieved the way she wanted things to go with her baby’s birth versus the way she was afraid they would turn out, and I think I must have told her, in a thousand different ways, to turn to Mary. I prayed countless rosaries for her and cried for the trials that blocked her unfettered enjoyment of her pregnancy, of the new life within her.

And the baby was born on a feast of Mary.

There’s a heavenly connection between me and this baby, begun with my role as godmother and sealed with the feast day she blessed with her birth. My role -- to pray for and help this child to grow toward heaven -- is parallel to the role Mary plays in each of our lives. As the Queen Mother, Mary intercedes with the King, her Son. She has a role of dominion, but she exercises it with humility and love, and I take my lesson from her.

It’s my goal to reflect the queenship of Mary in my small -- yet important, oh-so-important -- role as godmother. One way I can do this is to understand how heaven might appear to a preschool girl.

So I’ve spent some time picturing Mary in a different way than I usually do. In this altered portrayal, inspired by a four-year-old’s version of heaven, her hair’s not scattered, she’s not wearing an apron, and she isn’t wearing the same old thing. Her hair is coifed and, in all likelihood, has flowers in it. She’s wearing something that I might consider over-the-top for daily life, which is certainly a dress and includes silver slippers with rhinestones embedded across the toes.

She’s marvelous, isn’t she? I think she’s Cinderella-meets-Beauty, crossed with Sleeping Beauty and Thumbelina. She’ll have a crown on, of course, and I think it’s going to be delicate -- this is the part where I refuse to yield to the four-year-old’s sense of style and lean instead to my own tastes.

I had pictured heaven as a rather more peaceful place than my daughter’s suggestion of a sparkly glitter filled palace allowed. I wasn’t considering what I would wear (or what she would wear either), and, honestly, I didn’t think it would matter.

And it really doesn’t matter, except to make heaven accessible to a four-year-old’s mind. In her world, the very best things are princess-y. They are filled with pink and shimmer and flounce.

The wonder of heaven, to a child, includes the things that make them gasp and smile here on earth. Though I chuckle to myself, my girls see so much more than just the external glam I’m describing. Thanks to their innocent acceptance, they see the true beauty, the real wonder, the authentic heaven. The words they use to describe it limit them, but it’s that quality of their hearts -- innocence, truth, wonder, authenticity -- that reminds me, when I consider the Queen of Heaven, that I must become more like a little child.

But why do we go to all this trouble for Mary?

Isn’t she just the woman who bore Jesus? Does she really deserve all this finery?

In Catholic tradition, the title Queen of Heaven has been included in literature, prayers, and devotions almost since the beginning, back when the apostles were still walking the earth. It stems from the custom, in the Old Testament kingdom of David, of the queen mothers. Since the kings had many wives, due to reasons of state and human weakness, the honor of queen was reserved for the king’s mother. Her authority was greater than the many wives; for one thing, there was only one of her.

When I think of Mary as Queen of Heaven, though, I don’t picture her as a dictator, and, though the little girls in my life would dispute this, she’s not wearing anything fancy. For me, Queen Mary is an everyday sort of woman. She’s busy helping...the unhappy dying who need comfort, the frazzled moms who need sanity, the desperate poor who need sustenance. She isn’t kicking back and having her feet massaged, but is rather holding a new infant and the parents whose hearts are broken, welcoming a young woman through the garden gate, and praying for the many on earth who cry out to her.

Mary is a queen who wears an apron and drinks her tea on the go, though I believe she always has a moment to sit down and savor it -- and the company she’s in -- given the chance. She’s a gardener who plants seeds in hearts and waters them with her prayers.  She’s a cook who stirs in love and simmers it over the fire of her Son’s mercy.

Maybe I’ll find out someday that Mary wears a sparkly crown. I think it more likely, though, that she’ll be dazzling without need for all the accessories.

Singing Out Loud: How the hymns of my youth became the rhythm of my life
Read
Mary of Nazareth Blog Tour/Rosary Crawl: The Carrying of the Cross
Read
When Saying 'Yes' Hurts
Read