Family First: Why I'm Not at the World Meeting of Families

I didn’t think, when I first heard about it, that I’d want to go. I’m not into crowded places, big cities, traffic nightmares.

It’s the company I’m missing: the fellowship; the chance to see, in person, the smile that’s attached to the author/reporter/speaker/Sister/priest I follow on Twitter. The chance to get acquainted with several writers whose work I admire–my amazing coworkers in the vineyard that is CatholicMom.com.

And it’s the fact that it’s right across the river. It’s closer than the hospital where TheKid sees his endocrinologist. It’s only about as far as university my daughter attends, and just a little bit past my older son’s rented home in Philly.

It’s right here. And I’m not there.

When I saw tweets from Lisa as she crossed that bridge that stands between me and the city, it hit me: there’s so much I’ll be missing this week. 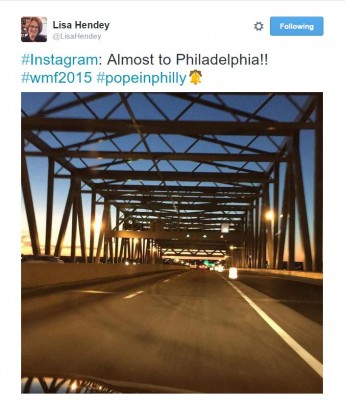 Monday morning, while my coworkers and friends and people I’ve admired from afar for a decade tweeted about picking up their press credentials, I stood in the car line at TheKid’s school, where I was substitute teaching for the day. I opened minivan doors and helped four-year-olds gather their lunches and backpacks. I greeted fifth-graders and chatted with the principal and the PE teacher about my daughter’s rugby game. I stood next to the Paper Pope that the pastor pulled out of the church vestibule, and laughed at the little kids’ faces when they realized they weren’t looking at the real thing.

This year, family circumstances do not allow me to attend the World Meeting of Families that’s happening right in my backyard. At this stage of my mothering journey, I can go hours at a time without being needed–but it’s those times when I am needed that count, and diabetes being the random disease that it is, I never know when those times will happen. Right now I don’t see my way clear to be more than 20 minutes away.

My cell phone buzzed in my pocket during Mass this morning: it was the school nurse. TheKid’s been battling a stubborn high blood sugar (plus seasonal allergies) all night, and he just wasn’t feeling good at all. So I went over to school to pick him up, and he’s parked on the couch now with a fresh insulin-pump set and a huge water bottle.

That’s my reality right now. I am grateful that TheKid is doing as well as he is. But I can’t let that lull me into a false sense of security, because diabetes is a 24/7 disease.

My first job right now is to be available for my family. I can hobnob another time. And during those times when I’m not needed right this second, I can watch things unfold on TV, on Twitter, on Facebook and on CatholicMom. I can pray for the success of this week’s events and for the safety of all involved. And I can try as hard as I can to be genuinely happy for everyone who is blessed to be able to be there.