Why I Love My Faith 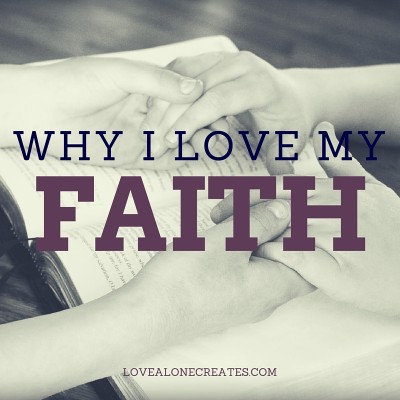 A while back, lots of Catholic bloggers were joining in this unofficial crusade to explain why Catholicism was their chosen faith. I wanted to jump on that bandwagon but missed it, so I decided to write something similar now – not because everyone else wanted to defend their faith, but rather because I’ve increasingly become aware that my faith is unpopular. I wondered if some of my non-Catholic readers were occasionally “turned off” by my spiritual writing, too, so I felt it would be helpful for me to explain myself.

For starters, I was born into a Catholic family, which defines me as a “cradle Catholic.” My parents chose my faith for me when I was baptized as an infant, but there came a crucial moment in my faith walk when I had to choose faith for myself.

Though I was always thinking about eternity, God, the angels and saints as a child, I never fully understood the rituals and liturgical calendar year after year. (One would think I learned this through adequate catechesis during my Catholic grade school religion classes!)  I went through the motions, at first because “this is what we do,” and later it all became mundane. Naturally this was when I was in high school.

There came a point when I chose to attend a large public high school, and I was introduced to atheists and Satanists for the first time in my life. I also met some very zealous Christians of all denominations, and I was intrigued by their enthusiasm, which was something I had recently lost. So I asked my parents if I could attend their youth gatherings, church camps, and weekly services. They reluctantly agreed (and I’m glad they did).

For a time, I happily participated in the praise and worship singing, responded to altar calls, and generally was swept away by the spiritual vitality present in these places and among people of all ages. Catholicism had become sort of lackluster for me, and I wanted something more – an experience perhaps.

At one point, the glimmer of other denominations began to fade, and I was perplexed by this, because it wasn’t something I wanted to happen to me interiorly. During this silent internal conflict, I prayed that I would know Truth, that God would show me where His Truth resided. I was truly open at that time, absorbing everything about Christianity I could.

Then one day I was at Sunday Mass with my parents, and my heart was wrestling with this question of Pilate, “What is truth?” My seeking had gotten more intense, and I wasn’t sure why it hadn’t resolved at that point. Nearly ready to burst into tears, I prayed desperately and fervently that God would reveal to me Truth.

At that moment, I raised my head as the tears began to trickle down my cheeks, and I saw the priest elevate the consecrated Host as he said the Eucharistic Prayer. It was as if the scales had fallen from my eyes, like what happened to the blind man in Scripture, for I could see clearly and definitively that this tiny, white piece of unleavened bread was truly the Body, Blood, Soul, and Divinity of Jesus Christ.

Somehow God’s grace revealed to me that the Eucharist was truly Himself, a free, total, faithful and fruitful gift of self. It was the most intimate way I could unite myself to Him, and I could receive Him daily if I chose. Suddenly what I felt was lacking in the Protestant churches made sense to me: They didn’t have the Eucharist.

After this day, I chose Catholicism for myself. I began educating myself in apologetics and read the Catechism, as well as the early Church fathers. I wanted to know and defend my faith, especially all that I never could quite articulate to my Protestant friends when they asked about Mary, the Sacraments (especially the Eucharist and Confession), the rosary, etc. Suddenly my faith became new to me, and I fell in love with the Church my parents had chosen for me long before.

Today my faith is the very underpinning of my identity as a woman, wife, mother, daughter, sister, and friend. I don’t have to talk about it like I did fifteen years ago. It just is a part of me and shapes everything I do, say, and the way I see the world. Thankfully, proselytizing is no longer in my spiritual repertoire, because it’s not necessary.

People know I am at the very least Christian when I choose to say, “Oh gosh” instead of taking God’s name in vain. They know I have some sort of faith guiding me when I mention “blessings” and “grace.” I don’t have to say I am a Catholic, and very often I get into personal and deep conversations with convicted Protestants who are entrenched in anti-Catholic rhetoric. And when I do, they are pleasantly surprised and sometimes genuinely confused that they and I could possibly have so much in common!

This is how the New Evangelization has influenced my life. I now am grounded solidly in my Catholic identity. I know what I believe and why. And I am at peace with some of the unanswered questions and mysteries that still remain. Much of what I have come to know has been by way of an unknowing humility, which is a necessary virtue to accept the teachings of the Magesterium. Many people like to say, “Well, I believe this, but not that” or “I’m not sure I agree with everything the Catholic Church teaches.”

The truth is if we accept one thing the Catholic Church teaches, then we must accept all. We don’t have to understand everything right away, and it is likely we will never understand all of the mysteries of faith in this life, anyway. Even so, we trust that it was Jesus who founded this first form of Christianity, and He guides it still. Yes, Protestant churches have beautiful gifts and truths, and I still have many close friends who are my Protestant brothers and sisters.

But I am proud to be Catholic. I’m not out to convert everyone, nor do I think that is necessary in order for us to acquire eternal life with God. But I do think it’s worth looking into, because it is a faith rich in Tradition (and tradition), a faith that stands against the cultural mores of our time and yet remains steadfast in the Truth.

In such an uncertain, relativistic, post-modern society as this, I am grateful and relieved to have the beacon of the Catholic Church to guide me, keep me centered and to which I can run when I feel lost and confused by all that is happening around me.

Introducing the Waiting with Purpose Book Club
Read
Jeannie Ewing Teaches Us to Transform: From Grief to Grace
Read
Growing With the Saints
Read