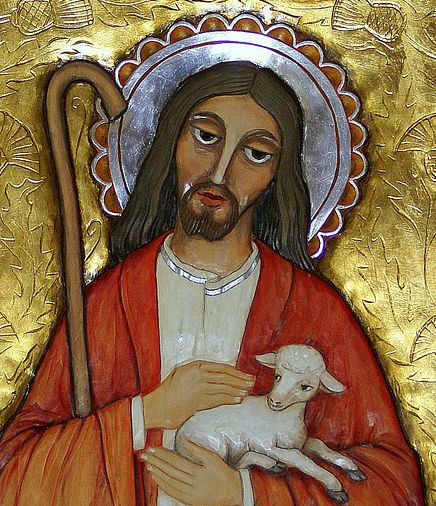 In light of the Pope's recent visit to the U.S. and his recent encyclical, Laudato Si (On Care For Our Common Home), I wanted to share a post from my blog, greenforgod.blogspot.com, from July of 2012.

I love the book Pride and Prejudice. I've read it over and over again. In fact, I've probably read it at least ten times. My husband doesn't see the allure of reading the same book repeatedly. If he sees me with a book in hand, he'll often say, "Reading Pride and Prejudice again?" with a smirk. I patiently tell him the reason that I re-read it is that I get something new out of it each time. (At least I think I tell him patiently.) Each time I read P & P I see a slightly different perspective or I catch a nuance to the dialog that I hadn't noticed before. But that doesn't just happen when I read. Not long ago, I had a similar experience during Mass.

As I sat in the pew, I found myself listening to the parable of the Good Shepherd from the book of John, chapter 10. In it, Jesus tells his disciples, "I am the good shepherd. A good shepherd lays down his life for the sheep. A hired man, who is not a shepherd and whose sheep are not his own, sees a wolf coming and leaves the sheep and runs away, and the wolf catches and scatters them. This is because he works for pay and has no concern for the sheep."

As those words washed over me, I had a thought: "This parable is about relationship!" The Good Shepherd cares for his sheep. He has a relationship with them. That's why he's so committed to caring for them. The sheep don't belong to the hired man so, what does he care if they get eaten by wolves? He'll just go get another job. I've heard this parable before, many times, in fact. But never had I thought about it in those terms. See? Repetition isn't such a bad thing.

Then it occurred to me, "This is what I'm trying to communicate when I tell people about Green 4 God!" The main point to my mission is to make people understand their relationship with Creation and with the Creator. When those relationships are strong, we're more committed to caring for the earth. That commitment makes us more invested in Creation and its health.

This is good to remember in many aspects of our lives. When we have relationships with other people in our neighborhood, parish, or community, we suddenly care what happens to them. We look out for their welfare. But, when we go in and out of our house without saying hello to the guy next door; when we sneak into Mass just before it begins and leave as soon as it's over; when we don't pay attention to local news and issues; we have no connection to the people around us and, therefore, very little concern about what happens to them.

I don't know about you but I'd much rather look out for others and hope they're looking out for me in return. So, as of today, I'm striving to be a Green Shepherd to Creation. Won't you join me?