The Ribbon of My Life and a Knot Undone

O Virgin Mary, faithful Mother who never refuses to come to the aid of your children; Mother whose hands never cease to help, because they are moved with loving kindness that exists in your Immaculate Heart; Cast your eyes of compassion upon me, and see the snarl of knots that exist in my life. 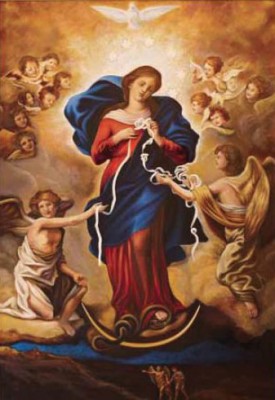 ...You know all the pains and sorrows caused by these tangled knots.

I was oblivious of the miserable state of the ribbon of my life as it would be revealed to me while following Pope Francis in America via social media and various Catholic and secular television outlets. Though I’ve learned there are many, one knot, in particular, began causing considerable discomfort as it tightened from both ends across my heart.

…Mary, my Mother, I entrust to your loving hands the entire ribbon of my life. In your hands there is no knot which cannot be undone.

Let’s be clear so as not to ignite a firestorm of vitriol and scorching backdraft. My sin is ever before me as I am totally present and repeatedly aware of my fallen nature in the Sacrament of Reconciliation.

From the White House to Madison Square Garden to Independence Hall - as a defender of the family, the Domestic Church, and our Holy Mother Church, the Bride of Christ - and NOT as a judge of souls, I was growing increasingly distressed by an obvious anti-family presence in the midst of “the world’s largest Catholic gathering of families” intended to “strengthen the sacred bonds of families across the globe” since its inception by St. John Paul II in 1994.

…Most holy Mother, pray for Divine Assistance to come to my aid.

In an uncharacteristic departure from my otherwise positive use of social media, I vented my distress in the following post: I publicly confess my inclusion among the broken and the spiritually sick in constant need of God's embrace and unfathomable mercy. But, I do not understand, regarding the pomp and circumstance of the historic visit of Pope Francis to the United States, the seemingly informed and intentional center-stage inclusion of Catholic dissenters - those who publicly and obstinately advocate an anti-family model and message contrary to the sacredness of family and the teaching of the Catholic Church. I will not publicly argue my faith in this forum but anyone with a charitable response may send me a private message. Please pray for me.

...Take this knot into your maternal hands this day

Pope Francis departed the US on Monday, September 28, the Feast of Our Lady, Undoer of Knots, and the Mother of Mercy wasted no time loosening this knot in the following responses to my post:

Brendan commented: Brian, 'the broken' which you rightly say is all of us, need the doctor for the spiritual medicine of mercy. Those who got close to Papa Francis may have been irrevocably touched. The Holy Spirit is in all the details working in a manner none of us can work out. The "year of mercy" follows this great event. A God of surprises!!! God is calling each person of faith to emulate the Father of the Prodigal…the Father who ran down the road to meet the son … God will bring all things to completion, ‪Brian. God bless you.

Bernadette commented: The Pope can handle it. No worries.

Lori commented: If only a few become enlightened to seek God more often, more openly and with contrition because of their experience then Pope Francis has done a tremendous service to that soul. Others hearts who may be unchanged or not moved require our continued thoughts and prayers to be joined in a spiritual relationship with their God. Peace to all tonight and every night.

…I beg you to undo it for the glory of God, once and for all, in the name of your divine Son, Jesus Christ.

On Wednesday, September 30, I read Encountering Mo Rocca at the Ambo by Elizabeth Scalia as featured on Aleteia.

"A 'culture of encounter' demands that we see the whole person before us, not simply an ideology, or a category of social standing, or even as a unit of sin, but as a whole person, beloved of God, and in need of mercy and redemption, just like everyone else. To encounter the person, and come to know the person, is to grasp the mission, which is to - in God’s time, not ours - bring that person into an encounter with Christ Jesus, who may be trusted to take it from there…."

“The encounter must come first and it must begin, as Pope Francis said in Madison Square Garden, by going out and meeting others “where they really are, and not where we think they should be!” This echoes the sentiments of Pope John Paul II, who told his priest to “deal with the world as it is.” – Elizabeth Scalia

On Thursday, October 1, Scalia published The Prayer We Never Quite Mean Until We Do which further examined the distressed response to Mo Rocca at the ambo in Madison Square Garden in light of the Parable of the Prodigal Son. Yes – mercy requires expressed repentance, “Father I have sinned…” but, as Scalia asked, “Who could wish to get in the way of that meeting?”

“Some people were concerned that I had overlooked or given short shrift to Aquinas’ teachings on sin’s effect on the soul; a majority of my correspondents worried that I did not sufficiently comprehend the price of scandal, and what it costs the church when a public sinner is seen proclaiming so great a mystery…”

Scalia continued…“I accept the legitimate fears of people who worry, not so much that a non-celibate gay man has lectored at a mass, but because of what message others might take from his participation …The concern has credence but only to a point, and then the questions must be asked, “where is our faith? If we err, do we better err on the side of humility and inclusion or prideful expulsion? Do we not believe that the Holy Spirit has a handle on this seeming whirlwind? Are we so conceited that we believe the church will fall, in direct opposition to Christ’s own promise, unless we hold it erect of a moment?”

Do you understand that it’s really NOT about Mo Rocca or any other person who may have stirred up a hornet's nest of my most legitimate concerns or ruffled the feathers of my most sincere Catholic sensibilities?

This knot made ME more like the Older Brother and less like the Father in the Parable of the Prodigal Son. Are there similar knots in the ribbon of your life?

Encountering Mo Rocca at the Ambo

The Prayer We Never Quite Mean Until We Do

The Time Mary Brought Me Back
Read
Hope for a Broken Marriage: Our Lady's Powerful Prayers
Read
Book.ed: 'Our Lady, Undoer of Knots'
Read