"Called by Name" Challenges Author to be Called to Faith

Editor's note: This month, we send a special message of gratitude to Jacqueline McDonald, Founder & Author, Called by Name Books for her sponsorship of CatholicMom.com. In today's reflection, Jacqueline shares her own personal spiritual journey and how her work on this very special project has brought her closer to her faith. Please visit www.CalledbyNameBooks.com and use promo code merrychristmas for a great discount on a unique and memorable gift idea! Lisa Hendey 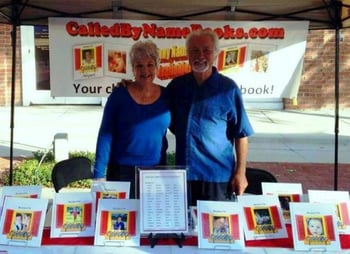 Last Christmas-time, I signed a contract to launch Called by Name Books at a Craft Fair in Bartow, a small town in the middle of the state of Florida. On that bright and promising first day of the fair, my husband and I, like broken-legged spiders weaving unwieldy webs, pitched our vendor tent, a gift from our son, Matthew.

Not long thereafter, a first-time grandmother approached our booth and asked my husband, "Do you have a book for the name Isabel?"

"Why, yes, we do," Grant replied. "As a matter of fact, that's one of our sample books. Would you like to come inside, sit down, and read it?"

"Congratulations!" Grant said leading her to a metal folding chair behind our make-shift display table. 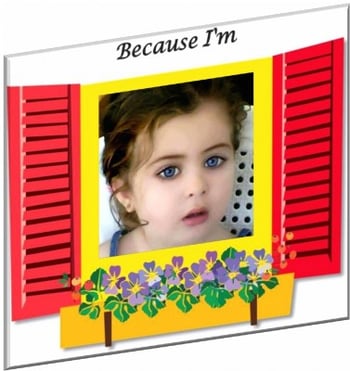 While she read, Grant joined me in front of our booth where I was doing my best to engage passers-by. So far, Called by Name Books was well-received. Proof of concept seemed at hand even though point of sale was not.

Since every Called by Name Book is a custom, digitally created product, our goal for that show was to raise awareness, hand out business cards and hope that people would be motivated enough to go home, fire up their computers or mobile devices, scroll through photos of their children and upload their favorites onto one-of-a-kind books.

The idea came easily, the stories didn't. The hardest part was getting them past my uncompromising editor, our daughter, Elizabeth. A former high school English teacher and current legal editor, Elizabeth is not, was not and will never be, a rubber stamp.

But I digress......back to Bartow....after reading Because I'm Isabel, Isabel's grandmother approached me. "That was such a beautiful story," she said. "I hope my little granddaughter grows up to be just like Holy Queen Isabel of Portugal." Then, with glistening eyes, she asked, "May I give you a hug?"

I opened my arms in response. While embraced, Isabel's grandmother whispered something startling in my ear, "You have a special ministry."

Her assessment stunned me. I don't remember what I said but I'll never forget how I felt. I was embarrassed. I felt like an imposter. After all, I was, at best, a CEO Catholic, Christmas and Easter Only.

I thought I was writing books because I couldn't find any with all my grandchildren's names in them, and oh, how they loved seeing their names in print. Besides, although I had had a successful career, I was, so far, failing as a retiree.

Trained by a hospice company and deployed to a hospice nursing home, I developed relationships with my assigned hospice patients. I acknowledged the fact that they were dying but talked to them like I do the living. I prayed the Hail Mary aloud, fed them ice cream from the nurse's station freezer and told their families to bring in family photos with family member names written on them so I could help them reminisce. I would have thought the nursing home would have sought to clone me but they had other plans. The staff could not abide intervening volunteers any more than I could abide inattentive attendants. I was the storm dispelling the calm.

They accused me of violating HIPAA regulations. My specific offense? I had breached HIPAA perimeters in order to access the ice cream in the freezer behind the nurse's station. Weeks earlier, I was told to "get it yourself" by a now silent, white-capped conspirator. My defense was summarily dismissed, as was I. They had put me in my place.

To be fair, not knowing my place has been a lifelong challenge. That's why I was shocked when Isabel's grandmother put me in my place. And she was right. I did feel called to write Called by Name Books. But, I'd not had the spiritual confidence to publicly acknowledge the calling. Perhaps Isabel's grandmother recognized me as the imperfect instrument of God that I was; a reawakened Catholic with a God-given mission: to make it easier for mostly secular parents, as I had been, to talk to their children about Him, His Word and the Saints in His Heaven.

I hope you'll let needful friends know that a Called by Name Book is a good place to start and I hope that you'll pray for me and my family. Thank you. 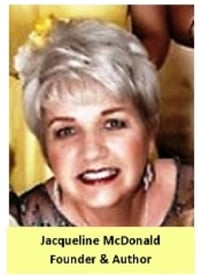