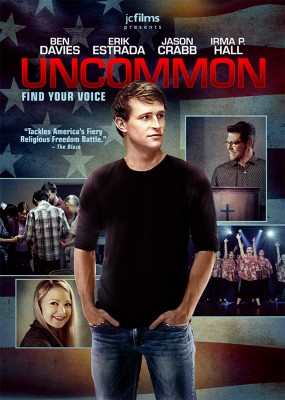 Erik Estrada (Chips) and Ben Davies (Courageous) star in the film Uncommon, a movie about a group of high school students where the drama club is cut from the budget and they are not allowed to have a Bible study, so they work together to create a play based on Bible stories that will make a statement for God. The first hurdle they must overcome is finding a teacher to oversee their club. All of the teachers refuse to be part of it, so they ask the custodian, Mr. Garcia (Estrada), to help them out.

A new student in the bunch, Aaron (Davies), leads the group in organizing the play since he knows the Bible well. Coming from a different perspective allows him to be a mediator and find a common ground for the group. While the students learn about and study the Bible and its stories, they draw closer to God, bond with one another, and are able to act like a team during their journey of faith.

The movie is geared toward young adults. The Dove Foundation rates this film appropriate for ages 12 and older. It is a good movie if you are helping a young adult stand firm in their beliefs in a public school where religion may be scarce. There are good points regarding faith, support, and teamwork that are addressed as well as the importance of individuals in God's eyes. The story takes a while to get into but becomes easier to follow further along. The characters are developed as the film progresses and each one's importance is revealed.

The film brings up the religion in schools debate. The students must stand their ground as a united front in the court proceedings. It also shows what young people can accomplish together. The identities of the students form through their study of the Bible and the support of each other. Each individual is important in the play, just as with God and life.

Do you know what part God wants you to play?

Your purchase of Uncommon through our affiliate link helps support CatholicMom.com but costs you nothing extra.