Is prayer pointless, even counterproductive, in light of the mess we're in? 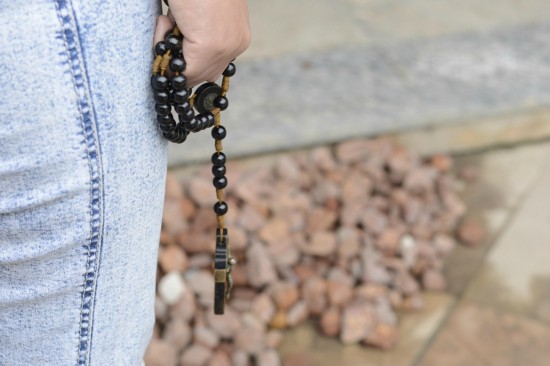 The post on Facebook had me confounded. It had quoted the Dalai Lama's response to the recent terrorist attacks in France.

"We cannot solve this problem only through prayers...I believe in praying. But humans have created this problem, and now we are asking God to solve it. It is illogical. So let us work for peace...and not expect help from God, Buddha or the governments."

On the thread, someone had given him a thumbs up, saying they appreciate the Dalai Lama's use of "logic over prayer" to solve the world's problems.

Another took issue to that: "Of all the ideas being thrown around the Western politic, praying away terrorism is not among them."

Of course, whenever someone in a leadership position speaks, all sorts of people weigh in, and often, the words are taken out of context. I read the context here, but it didn't change my initial response of the Dalai Lama's words all that much. My reaction includes a mix of nodding my head but at the same time, shaking it vigorously: "No, that's not quite it."

Far be it from me to claim any sort of moral superiority to the Dalai Lama, but his words got me thinking about prayer and whether we really understand what it is. I don't think he saying not to pray, just warning us to not use it as a crutch. Even with that more positive and probably more realistic slant, though, a few things just bothered me to the point of wanting to ruminate over them a bit more.

Point #1: "We cannot solve this problem only through prayers." Yes, that is true. And I don't know that anyone would ever suggest such a thing, especially among those of us who see the supreme value of prayer, and try to live by it. But from the Christian perspective at least, in looking at the saints and what they used as a primary tool, prayer would be the first response. And should be. Prayer is our recognition that without God, we can do nothing. So no, prayer cannot solve anything without some kind of action on the part of God or us, but it is, without a doubt, the best way to begin.

Point #2: "We humans have created this problem, and now we are asking God to solve it. It is illogical." But are we really asking God to solve it? Or is it just that this is our first and most natural response? That in times of confusion and worry, we turn to God. And shouldn't it be so? Freezing in our prayer position is a prayer unfinished. Prayer, as I just mentioned, is almost always accompanied in some manner by an action, if it is authentic. But I take issue with the idea that just because we are in prayer mode, one should assume we are acting as doormats, with the expectation that God will take care of things from there if we just strain long enough with our folded hands and pursed lips. Of course not.

Point #3: "So let us work for peace...and not expect help from God...or governments." Oh dear. I have a lot of problems with this. Not the "let us work for peace." Of course we must do that. We are obliged. Our faith moves us to do so. We are not living a full life of faith without this urging engaged. But the second part - that we should not expect help from God - now there we have a problem in my view. The day we quit hoping for help from God, it seems, is the day we find ourselves in hell. Let's hope that day will never happen. After all, God loves us dearly, and of course he wants to help, and will help, just as any parent would want to help his/her children out of a tough spot. It's just a matter of us calling out to him, and allowing our souls to be awakened, to be vessels for him. God will work in us and through us, but it is still God doing the leading. We are just responding to his divine, loving, merciful voice. May we never grow tired of looking to that help.

I believe the Dalai Lama is a good person who truly seeks peace. He has indeed brought good to the world. But I am concerned that his phrasing would lead anyone to believe that prayer is fruitless and unnecessary, when it is the first and best thing we have at our disposal in all times.

I don't think those who have been praying in the aftermath of Paris are on the wrong track, and if we need the Dalai Lama to remind us that it must not stop there, that is fine. But I think most of us know that - I hope anyway. Rather than be tempted to disregard prayer as a primary tool, let's hold it up as our first source of defense in love.

To be fair, the Paris ordeal has been yet another blow to many, and we are necessarily a little unsure of how to react. Our fog of confusion may have us temporarily stopped, bent at the knee, unclear where to go from here. But I think the best way to move out of the fog isn't to quit praying, but work our way out of the fog by praying.

Through prayer, we will find our way out of the mist to discover what God wants us to do next. Prayer will give us the courage to trust and follow God all the way; to set aside our fears and be radically bold in our love for our siblings throughout the world, and in our own immediate neighborhoods as well.

I find solace and direction in the words our Holy Father shared last weekend, after reading the penultimate readings of the Church year, which were apocalyptic in nature.

The problem, he said, is not when these apocalyptic warning signs of the end of this world will occur, but whether we will be ready for that encounter. Similarly, the problem is not how the end of the world will happen, but how we should behave in the meantime.

I can think of no better way to "behave in the meantime" and "be ready for that encounter" than prayer.

So let's pray without ceasing, whether we are in a quiet, still moment in the Adoration chapel, or in the van waiting for our kids to come out of the school building, or bringing chicken-noodle soup to our sick neighbor, or dealing with conflict at home.

We should never underestimate the power in prayer, every hour of our lives. It is only when we are tethered to God in this way that we can move forward even an inch in confidence that we are doing what is necessary and best in God's eyes.

Q4U: What do you think of the Dalai Lama's words, and what is the response you feel called to at this moment as a result of prayer?

Facing down the 'holier than thou' complex
Read
Why Are Priests So Happy?
Read
Unpacking Philly: From the Bubble in the Belly of the City
Read