Last weekend my husband and I sneaked out for a rare evening to ourselves. I had been waiting for "The 33" to come to theaters; it was a familiar storyline to me - and to many - and I was anxious to see it dramatized.

My dad, Dan Zeidler, had providentially been working on pro-life projects in Chile five years ago at the time of the 33 mine workers' unbelievable rescue, and had enthusiastically shared with us the immense relief felt by an entire country as they were pulled from what seemed like the center of the earth. It was an answer to prayers echoing around the world, and a there was a sense that God may have a message in it for those who would take the time to hear it. Certainly, the 33 men of the miracle thought so.

In short, the movie is based on the true story of the 33 Chilean miners who were trapped for 69 days over 2ooo feet underground when the hundred-year-old San José mine collapsed in the middle of their shift. The conditions were such that chances of their survival for more than a few days were slim at best. But believing in the love of their families and the faithfulness and power of God, the miners did not give up hope. Deep underground, they prayed with a true humility. Those above also clung to a strength greater than themselves and gave their own hopes over to prayer. Spontaneous shrines dotted the desert around the camp, "Camp Hope," where they lived during the long wait. Rescue workers, too, from many nations, huddled in prayer before beginning their efforts, draping a rosary over the drill and having the equipment - much of it coming from all over the world - blessed by the local bishop. Masses and vigils kept up a steady hum of prayer to heaven.

The miners, carefully rationing a few cans of tuna and some cookies, met together daily for prayer time, begging God for a rescue. They repented of past sins and even confessed to each other little injuries that occured as they huddled together in the collapsed cavern - tempers lost, angry words. Finally, they could hear the drills probing for them, looking for signs of life. But time and time again, they were tempted to despair as the sounds drifted downward and became fainter. The drills often missed their spot by just a few feet. Still, grace reached them like an unseen light. They continued to pray.

When the miners were finally located, all of them miraculously unharmed even after over two weeks deep underground, the prayers intensified. It was a miracle that they had survived. But it would be another miracle to get them out. Deacon Greg Hall from Texas, an expert who was called in to assist the efforts explains in an interview in the Catholic Herald, "All the computer models we did, all the calculations we did didn't work, because we knew that we had to drill a minimum of a 26-inch hold through solid rock, 635 meters, and we couldn't use fluids. You can't really do that," he said. It seemed impossible. 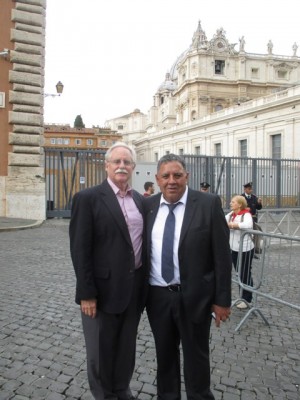 Dan Zeidler with Luis Urzua, the shift supervisor and the last miner to be rescued. Photo courtesy of Dan Zeidler. Used by permission. All rights reserved.

Deacon Hall recalled going out to the desert as the drills droned on, praying the Liturgy of the Hours. "On one particularly bad day, after a setback on the job, I remember the Psalm was Psalm 63:2, which says, 'O God, you are my God, for you I long, my body has pined for you like a dry weary land without water'...I thought, man, here I've been praying and I've been asking God to help me, but I'm failing, I'm failing completely. But he's here - the same spirit of God that was with Moses out in the desert, the same spirit of God, the Holy Spirit that's in our Eucharist is with me. And so pretty much at that point I said, 'Hey, we're changing the dynamic - I'm no longer praying that you help me, I'm praying that you do it and I help you."

Even then the setbacks continued. It began to look like the miners might have to wait for months for rescue, in the increasingly damp and unstable mine, living on food sent down to them in little tubes. Deacon Hall distinctly remembers praying these words: "'Listen, I've done everything I can, we've done everything, we can, we failed. Those are your sons down there as well. If you want us to keep on going you're going to have to send your angels down to dig them out.' That's what happened. We got unstuck and we were able to continue to go down and we were able to reach them."

Millions and millions watched as one by one, the 33 miners rose out of the tiny shaft in the capsule called the "Phoenix," named after the mythical bird which rises from the dead, and a Christian symbol of Christ's resurrection. Embracing the rescue workers with unspeakable gratitude, they knew who had really reached into the rubble of their catacombs and pulled them out. God had saved them.

The miners remained convinced that their rescue was an act of God. Strong in faith, most of them traveled to Rome last month to spend the fifth anniversary of their rescue with Pope Francis.

Their story reads like a parable, and its meaning is easy to see. The power of prayer, trust in God, the love of families and the common brotherhood of men: these are universal themes that resonate in the caverns of our own hearts. We can all find a message that speaks to us.

And like everything that God writes, there are layers in the story, to be peeled away as we ponder. The pro-life theme is hard to miss. One miner called the shaft which sent them food, water, notes, even bible and rosaries blessed by the Pope, his "umbilical cord." It seemed to all that they had been given a "second birth," and as their eyes adjusted to the sunlight, they awoke like new men, born again. (They were finally rescued on October 13 - the anniversary of the miracle of the sun at Fatima.) The cavern had been, in the end, a womb which had kept them alive while the cave callapsed, not a tomb. The world had used all its resources to save them, without counting the cost. In the end, millions were spent in the rescue. Why? Simply because they were alive. 33 hearts beating below the ground.

Chile was at the time, and is now, a country rich in faith. It remains one of the nations where currently life is constitutionally protected in all of its stages, including before birth. And proving the propaganda and lies of the abortion industry wrong, it boasts the lowest maternal mortality rate in the world. But there is a growing movement pushing for legalized abortion in Chile. In an interview with LifeSite News while they were in Rome, some of the miners themselves expressed their dismay at the proposed legislation and the need to protect mothers and children. Let's pray with them that this movement fails.

And finally, I think, it isn't too much of a stretch to see the mine as a symbol of the human heart, the nous, the deepest center of ourselves. When our heart, weakened through ages and ages of scratching and digging for shiny bits of dust, finally collapses in on itself, then we are forced to cry out to God. Then, on our knees, the darkness pressing in upon us and tempted to doubt and fear and anxiety, we pray, wondering if we are heard. Can God see us? Is His gaze more weighty than the heaviness of our self-inflicted prisons? How deep can mercy reach?

And then, always, if our prayer is sincere, in the fullness of time - His time, not ours - the hand of heaven reaches in and pulls us back into the luminosity of a life of grace, the light of God's life and presence. And we again can see the outline of His face. We realize what concentration camp survivor Corrie ten Boom said: "There is no pit so deep that God's love is not deeper still."

At last there will be a moment, too, when we will look down and see our darknesses, and our hearts will stop for a second as we see something else. There in the deep, we were not only rescued by God. A more profound truth will fall upon us. It is what the miners wrote on the walls of their earthy womb before they left it: God was with us.

He not only saves us. He waits in the dark with us. 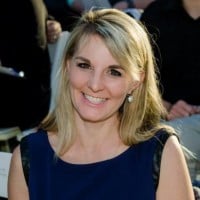