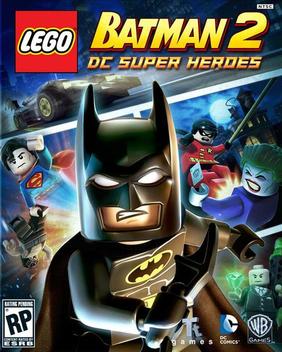 Lex Luthor is going to become President of the United States through nefarious means (of course!) and he's enlisted the help of Joker to do it. It's now up to Batman and Superman to stop him ... possibly, with a little help from their friends.

This is very simple while doing a lot of things at once. One button will switch from one character to another (several on the screen at once). The jump button does different things for different characters — be it double-jumping or flying. The special abilities button can do something as simple as activate scanners, and holding it down arms and lets you target with a ranged weapon.

Basically, Lego figures are beating up on each other. Only this time, you get the large playground of Gotham to run around in.

The music was okay.

And the graphics sufficed. This isn’t the Lego Marvel game.

It’s a Lego game. I’m going to pretend that no one is really and honestly concerned about that.

No community, but there is co-op throughout the game.

Too short for that.

A far superior game of either of the Lego Batman games.  I played for 16 hours in this game, and it felt like a better, more fulfilling experience than the 27 hours I spend in Lego Batman 3 looking for something more to be there.  If you want a DC Lego game, get this one. The others are okay, but play this one if you can.

ESRB Rating:  E For Everyone.

Read more of our Tech Talk columns.
Your purchase of this game through our Amazon link supports CatholicMom.com!