Assassin's Creed 2 Review: The Truth Is Out There

Dear Gamer.... why are you even reading this review? Seriously? If you read my first Assassin's Creed review, you know I found that game amazingly irritating. I have an excuse – friends bought me the trilogy for Christmas, so I feel I must play it. What's your reason? You've probably heard that “Oh, but AC2 was really so much better than the first one.” In that, you're right and you're wrong. I'll explain.

There is a joke that says that in grammar school, we learn a little bit about everything. In high school, we learn that things are more complicated than that. In college, everything we know is wrrrrroooonnngggg. On the History Channel.... aliens. It's how I see Dan Brown novels. In the case of Assassin's Creed, they took this joke a little too seriously… 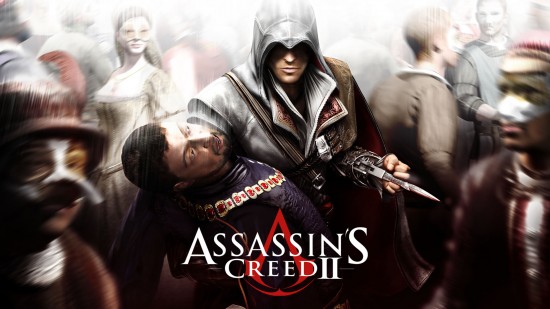 The premise is that Miles Desmond (from the first game) is broken out of the clutches of the evil corporation run by the evil Templars … Yes, those Templars. Don't ask. This is the end of the first game, but the designers were obviously too lazy to make a different segment for the opening of AC2.

The Assassins – the “good guys” – are in the last stages of their centuries-long war with the Templars, and losing. And so Miles Desmond, former bartender, is being tapped to come to the rescue. However, he needs to be trained, so the Assassins are going to plug Desmond into a plot device that allows him to access the memories of his ancestors.

Instead of going back to the boring Altair, the protagonist of the first game, the game writers decided that their hero should be, oh, likeable. There's no reason for it in the story, though they tried to explain it in one line.

So you're going to be playing for most of the game as Ezio, an Italian youth in renaissance Italy, whose family has been killed by shadowy forces (ie: Templars) and he retaliates by spending the next ten years hunting down and killing those involved. This journey of revenge will lead him to allies such as Leonardo Da Vinci, who makes new weapons for Ezio to use, and Nicolo Machiavelli, and Lorenzo Medici, as you fight against the Templars, and their avatars for this generation.

If your next thought is, “They're not going to go after the Borgias as the bad guys, are they?” Yes. Yes they are. The final boss fight is actually a fist fight with Pope Alexander VI in St. Peter's.

And if you think that's blasphemous, the punchline is even worse. Apparently, a side mission with a collection of puzzles includes “The Truth.” And “the truth” is out there. Very out there. So out there, Adam and Even did not defy God, but space aliens. Yup, they're going for the History Channel view.

How does this improve over the original game? The gameplay is leaps and bounds and light years ahead of the first one in the series. It was rusty, and the roof running was poorly executed.

Here, Ezio moves mostly the way you want him to. However, if you want a running jumping game that works, I suggest you go back to the Prince of Persia Series.

Unfortunately, most of the missions still amount to run, jump, stab. Granted, Ezio gets some new toys, and is forced to use them by the storyline. And, unlike the first game, not everybody with a sword will come down on you like the wrath of God if you breathe funny. But there are some moments where you're playing and think, "Why am I not playing Batman: Arkham City?"

The gameplay is the seller on this entry in the series. Not the plot … obviously.

The graphics are elegant and beautiful and breathtaking. Seriously, these cities are true works of art in their design. And this time, you can tell the cities apart from each other.

And we have a soundtrack this time. And a main theme. Someone decided to actually do their jobs.

Once again, you know there's a problem with a game that starts, “People of every religion worked on this game, honest. Don’t be offended.”  That’s the first warning sign. Of course there's the evil Pope, the trash-talking “history” about any historical figure who went to church for five minutes … you get the idea.

Morality in this game? What morality? Let's just say that courtesans are your friends.

The language in this game is a problem. Especially if you get the Italian translations in the subtitles.

Oh yes, and at the end of the day, you're still hacking people to death with giant knives on a quest for revenge, and there is no option to just pummel them unconscious in self defense.

Also, the creed of the Assassins is “Nothing is true, all is permitted.” If you know the original quote from Dostoyevsky, that line should scare the heck out of you.

None. At all. There's not even replay value here. Why? Read the spoiler.

If you read the first Assassin's Creed review, you know that the first game doesn't end, it just stops. In this game, the 21st century storyline has an ending – an ending in the mold of The Empire Strikes Back, but it's at least an ending. Unfortunately, the story we care about, Ezio, turns out to be nothing but a plot device to advance the 21st century story – you know, the one we don't care about.

SPOILER ALERT: After beating down Pope Alexander VI in St. Peter's Basilica, Ezio gets into a MacGuffin machine called “The Vault,” which is merely message from a prehistoric alien named Minerva, reserved for … Desmond. The last time we see Ezio, he's confused, wondering who or what a “Desmond” is, and that's it. It just stops.

My Rating: Never again. (I have Assassin's Creed: Revelations, but I'm not playing it if you paid me … actually, no, I would pay it if you paid me. We can work out a $20/hour pay scale. Call me.)