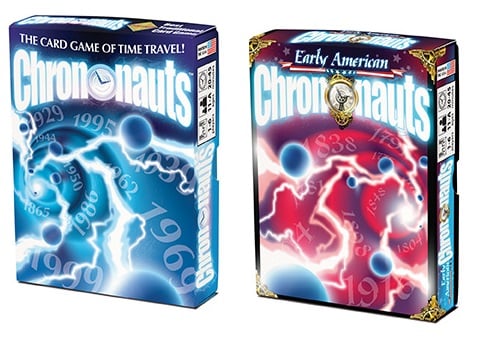 Welcome to the first review of a new feature called "Favorite Games for Family Game Nights." This is an ongoing project, so let's get to the first few games we're going to play. The two games are called Chrononauts and Early American Chrononauts, available from Looney Labs. The price for each deck is approximately $20 and the recommended age is 11 and up, but I think you could play it a little younger than that. Since the gameplay and premise of these games is the same, this will be a dual review. In the game, you are a Time Traveler with a Secret Identity and a Secret Mission.  Your job is to collect priceless artifacts, repair enough paradoxes, or change time enough to arrive back safely at your alternate timeline. For this example, we will be Betty and our mission will be "The Scientists' Wish List." We can see on our card that we want the year 1945 to be black and 1968 and 1969 to be red. (We'll get to how to make that happen.) For the artifacts, we need to collect any Live Dinosaur, the Crown of Thorns, and a Cure for Cancer. 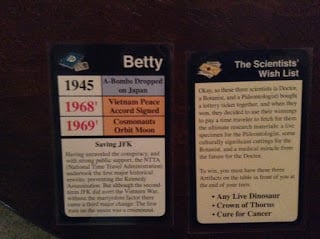 This card game plays a bit like a board game. Initially you arrange the 32 time cards chronologically in four rows of eight as seen below with all the dates black and the card colors visible being purple and blue. 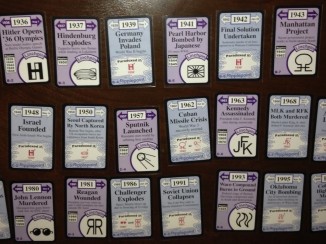 The Purple cards are Linchpins and can be flipped by cards in the deck, and the Blue cards are Ripplepoints and flip when corresponding purple cards flip. For example, If you flipped 1865 from black text to red text, Lincoln Assassinated to Lincoln Wounded, that would trigger you to flip 1868 Johnson Impeached, because Johnson couldn't be impeached if Lincoln never died. Thus, a paradox is created. Before I get to paradoxes, let me tell you about cards you will draw during your gameplay. 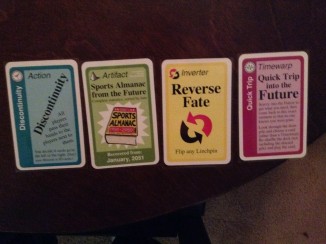 Once you use an Inverter on a Purple card, you create a Paradox (the back of a Blue card on the timeline). Here is what 1945 looks like as a Paradox. In our example, Betty does not want 1945 to be red, but back to its original black. However, if someone does need 1945 to be red, they could play this orange card called a Patch, and thus make an alternate history for that year. Play continues until one Time Traveler has ten cards in his hand, the three Artifacts on his mission, or the correct years on the timeline in black and red (red cards must no longer be paradoxes, but be patched).

That, in a nutshell, is how you play the game. Now, for my thoughts and review of the game. For starters, I love that this is a card game. It is portable and fits in your pocket, so you can take it with you wherever you go. Secondly, the rules aren't overly complicated. I know I wrote a lot about it, but after you play through it once, it makes sense what you can and can't do, and the learning curve is very shallow. Third, I LOVE the theme for this game. In the gaming world, there are a lot of themes that are overused, including general fantasy, zombies, and H.P. Lovecraft's Cthulu for some reason. There aren't a great deal of time-travel games, so this is a gem.

I recommend that when you're playing the game, take your time. Read the characters. Read the different cards. There was a lot of thought and effort that went into each of these cards, the backstories of the characters, and the alternate histories. It's not only creative, but it's a very clever game of hypotheticals. How would the world be different if Lincoln hadn't been assassinated or if the Titanic wouldn't have sunk? The results aren't always good in the game. In fact, you might end up triggering World War III.

Other things, I love about this game are the unique gameplay options you can experience. If you can't find a friend or family member to play with you, there is a solo option. If the regular way of playing isn't challenging anymore, you can combine Chrononauts and Early American Chrononauts to make Uber Chrononauts! There are also very affordable expansions! A lot of games make you buy a whole new game with more cards (or pieces) to get new content, but for a few bucks, you can get 13 new characters with the Lost Identities expansion, and what's neat is that they used fan submissions to craft these cards. Crazy Joe is my favorite in this pack, as he wants you to have 13 un-patched Paradoxes on the board. 13 paradoxes normally means that everyone loses, but in this case he wins! It's a nice way to add a little chaos among friends. If you don't need more identities, there's also an option called The Gore Years, which expands the timeline from 2000 to 2008 and helps us imagine what could have happened if Gore, instead of Bush, had become President. I'm personally hoping we get another expansion after the next election.

Overall, I found this to be a highly detailed and enjoyable game with great replay value. The only strike against it were the Gadgets, which I didn't really discuss. These Gadgets are mostly Time Machines and can be overly powerful in my opinion. So you can choose to leave them out if you want to, or maybe the people you play with won't abuse their power too much. So if you like card games and time-travel Chrononauts and/or Early American Chrononauts. I recommend both for the Uber experience, but if you can only get one, then pick the era you like best. The wife enjoyed this game as well, but she said she would have liked it better if it was European history, which is fair, because American history can be a bit boring at time. Looney Labs did a nice job of spicing it up, and I think this game could be used as a fun teaching aid for the homeschool crowd as well! Highly recommended!

Chrononauts and Early American Chrononauts were provided to me for free by Looney Labs in exchange for an honest review.

Your purchase of these games through our Amazon links helps support CatholicMom.com!