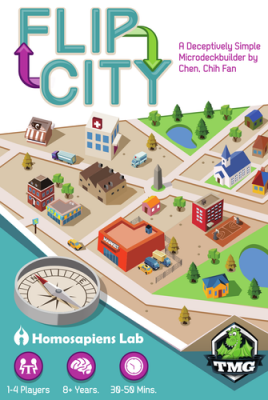 Of all the different types of games there are to play, there are some that I just inherently enjoy more than others. Deck-builders fall into that category. In a deck-builder, generally everyone starts with the same small deck of cards (usually 10). Throughout the game, you use those cards as resources/currency to purchase more cards, which allow you to buy even more cards and eventually score enough points to win the game. They are simple to learn and quick to play.

First, I would like to tell you about one from Tasty Minstrel Games called Flip City and its expansion Flip City: Reuse. In Flip City, you are using your deck of cards to build and improve the neighborhoods in Flip City, carefully balancing how quickly to build and how much to collect in taxes. The game plays 1-4 players, ages 8+. It retails for $20 for the base game and $10 for the expansion, and can take 30 minutes to an hour to play. Let's get to the setup!

At its core, Flip City is a typical deck-builder in that you are using cards to buy other cards to score points and win. HOWEVER, that is where the game stops being a typical deck-builder. For starters, the cards are double-sided. This means you have access to twice as many cards in half the space. It also gives you interesting choices to make, like whether you should flip a card or not. Second, you are not limited to a hand of five cards each round. You can keep playing cards until you choose to stop or are forced to stop. This is known as a "press your luck" element. I'm a bit of a chicken when it comes to this game element, but it can pay off big time, if you're lucky. Lastly, there is a "take that" element in the game, which allows you to mess with other players. This is seen slightly in the base game with the Apartment card, because you can load up your opponent's deck with Residential Areas, which produces more unhappiness for them. It can really be seen in the expansion with the Plumber Shop, especially in a three or four player game, because you can discard the top cards from their decks and make them potentially start with fewer coins or points and more unhappiness.

Learn more about how to set up and play these two games. 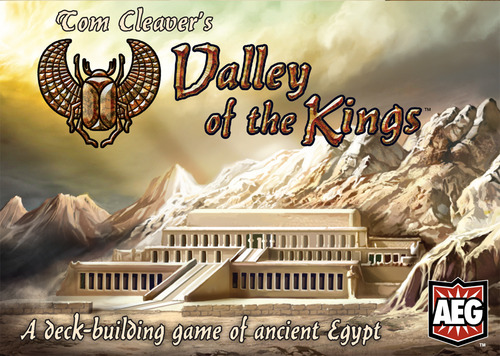 While some kids grew up wanting to be a professional athlete or a fireman, I grew up wanting to be an archaeologist. Yes, I know I was (and still am) a big nerd. but I'm okay with that, and I imagine you are too if you're reading this. I used to dream that I would perform these important digs in places like Egypt, Greece, or the Holy Land and find important relics that have been lost for centuries. Fast forward thirty years, and I didn't become an archaeologist after all. Despite that, I still have not lost my love for ancient histories and cultures. So when I find a game that has some of those elements in it and it's a style of game I like, I have to give it a try.

For only playing it a few times, Valley of the Kings has quickly become one of my favorite deck-builders. The first thing I like about it is the card buying method. With only being able to buy from the bottom of the pyramid, you have to decide carefully which cards to buy. The card you buy might lead to a better card for your opponent to buy. The second thing I like about the game is the actions on the cards that let you interact with your hand, your tomb, the pyramid, and your opponent as well. By having all these choices, it can be tempting to interact a lot, but you also don't want to interact too much, as it is still a deck-builder and you need to buy cards.

The third thing I like about the game is the way to score the game. In the base game of Dominion (the granddaddy of all deck-builders), you add up all the cards in your hand at the end of the game. Therefore, you have access to all your cards at all times. In Valley of the Kings, you must entomb your cards (and only once per turn). By doing this, you will score end game points, but you will also lose access to higher valued cards, which can be used to buy more cards and manipulate the game. It definitely creates a constant tension of, "Should I entomb this card or not?"

The fourth thing I like about this game is the ability to mix and match the three games together. Each set of cards in a game actually has two sets. That means there are actually six sarcophagi cards, two sets of the same three cards. So if you want to play with the base game and Valley of the Kings: Afterlife, you can take the duplicate set of each set out of the games and mix them together. This can create a whole new depth of scoring as you are working with ten unique sets of cards instead of just five. You could also make an even bigger game and combine all three. It requires a little Starter Deck manipulation, but it makes for an intense and fun experience!

The last, and certainly not least, thing I like about the game is the the artwork and theme! It took me a while to get to this aspect, but that's only because it's a given. The art on these cards is masterfully done and looks very authentic. Also, at the bottom of each card is some flavor text which tells you more about the card. For example, on the Brain Hook, it tells us, "Egyptians believed brains were worthless. They used a hook to remove them through the nostrils." Gross, but fascinating! Each card is like a mini cultural or history lesson, if you take the time to read it. This could make the game good for classrooms or the homeschool setting, because the best way to learn is when you don't realize you are learning at all!

A lot of people complain about the sequels, because they were expecting new twists on the base game. Why? The game plays wonderfully as is, and if something is not broke, you generally don't fix it. Overall, I am highly impressed with this trio of games. With a favorite theme, solid mechanics, good quality components, this game checks all the boxes for me. If you are looking to try your hand at deck-builders, this is one I'd highly recommend.