The Cinnamon Rolls That Could

I used to be a fairly terrible cook. Most of my family and friends can give you a funny story or two about some failed - maybe even downright disastrous - culinary experiment. After I graduated college and moved into my first real, grown-up apartment, I decided that I was going to learn to cook once and for all, and through a combination of food blogs, YouTube tutorials and hours of watching the Food Network, I started to make some progress.

Almost a decade later, I’m much more comfortable in the kitchen. I love to cook and bake and try out and modify new recipes. But there’s one that always eluded me: cinnamon rolls. I’d be okay with this if it weren’t such an important food for our family, but it is. My husband’s mother makes delicious cinnamon rolls and they’ve become a staple in the Swaim family tradition, especially on holidays. Wanting to give him a taste of home and childhood memories, that first holiday of our marriage I set out to make the warm, gooey rolls…and failed.

This year, we had a baby the week before Thanksgiving, so all our holiday celebrations were a bit tempered by postpartum and newborn life. And for the most part, I was okay with this. But by-golly, Josh was going to get Christmas-morning-cinnamon-rolls if it killed me!

My sister-in-law suggested this recipe, and since it had some substantial differences from other recipes I’ve tried, I decided it’d be worth the attempt. I followed it very carefully…with the exception of accidentally turning the oven on instead of the timer, and starting to bake them instead of helping them rise, only to realize and correct my mistake fifteen minutes later. (I tell you this so that you know 1) I am not a totally rehabilitated cooking failure and 2) this recipe is actually foolproof. And by foolproof, I mean postpartum-mom-in-the-middle-of-the-night-proof). I needed to proof the dough with the pan of boiling water twice to rectify my mistake, but they rose beautifully and puffed up perfectly when baking. 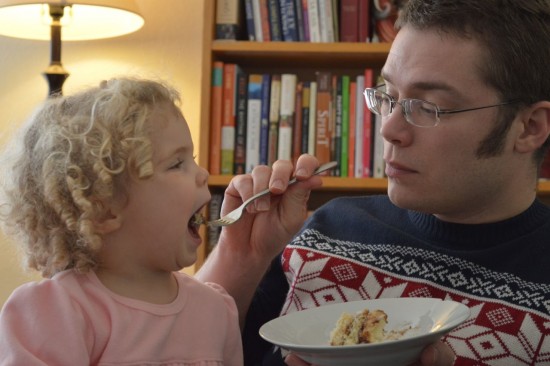 It was the sweetest success. The dough was soft, the filling was gooey and the icing was neither too thick nor too sweet. They reminded me a bit of monkey bread in their brown-sugary goodness. These rolls are best when eaten right away, so if you don’t plan on eating the whole pan in one day, I’d suggest halving the recipe, or just inviting all your neighbors over to share in the sweetness.

These would be perfect for a snow-day breakfast, a Valentine’s treat, a special feast day or a remedy against the winter blues.

Marriage and the Desert
Read
Why Weren't We Doing This All Along?
Read
Celebrating the Holy Name(s) of Mary
Read