Editor's note: Christine Johnson originally wrote this essay during Holy Week. She shares it today in the hopes that it will help readers start Lent on the right note.

Every once in a while, I get REALLY EXCITED ABOUT ALL THE SPIRITUAL JOURNEYING I WILL DO FOR LENT!

Yes, it must be written in caps like that, too, because my brain is all 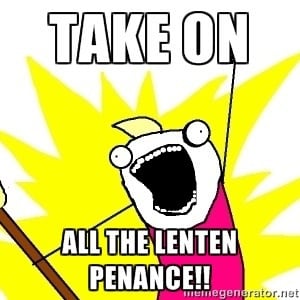 I remember one year, I wanted to start to go to daily Mass, start a daily Rosary, read two different books and blog about them both, give up social media, and maybe single-handedly start a soup kitchen in Danville or something. I managed to stay off social media, until my grandmother took ill and I started back on Facebook early because it was the easiest way to get updates (which my poor mother was sending out to at least a dozen people). Everything else was abandoned or done in fits and starts.

The next year, I gave up one thing and resolved to read a single book. SUCCESS!

I realized that if I tried to give up everything or tried to take on too many new, holy habits, I was destined to fail.But even though this lesson isn’t a new one, I tend to forget it and try to overdo things during Lent.

Kind of like this Lent. Once again, I decided that I would go from being a mediocre Dominican who remembers Lauds and Vespers most days and forgets the Rosary more often than not and has been running around and not making time for Mass regularly to becoming the PERFECT DOMINICAN WHO KEEPS ALL THE PROMISES! Plus, no coffee! And reading good spiritual books! And homeschooling perfectly!

Guess what kind of Lent I had, save the giving-up-coffee part?

Once again, I was faced with the knowledge that I could NOT just go from So-So to Super in one Lent.

And God doesn’t expect us to, really.

God knows we’re not strong without Him, and while we can do all things through Christ who strengthens us, we cannot do it all in one leap. After Mass on Sunday, our deacon said to me, “Even when we fail, we just have to get back up. Remember this saying, ‘Today, I begin.’ Every day, pick yourself up and begin.”

I don’t know why we expect ourselves to be able to just be perfect like flipping a switch, really. Weakened by Original Sin, there’s no way we can just turn over a new leaf without trials along the way, times of temptation and failure, as we work towards our salvation. Even Saint Paul wrote of his own difficulties in growing spiritually! And just like Saint Paul, I do the things I don’t want to do, and I don’t do the things I know I should!

In any other area of life, we expect to take our time gaining strength and experience to become good at something. No one would expect to start piano lessons playing Rachmaninoff’s “Rhapsody on a Theme by Paginini,” no matter what Bill Murray managed to do. Neither would someone who doesn’t exercise expect to go out and run a marathon as a way to start running. You don’t get behind the wheel of a car for the first time at 15 and drive like Richard Petty.

So why, for the love of all things holy, do we think that we can take our lackluster spiritual lives and jump straight to sainthood?

The other day, Elizabeth Scalia shared the following quote on Facebook, which really helped me start my Holy Week the right way:

What we experience as an appetite for sin is a sick appetite which has mistaken its object. In moments of despondency we may perhaps look around and think that we should be much happier if we gave up trying to be good, if we could enjoy all the vices of the world around us. But that is only a fantasy. The desire for goodness is really a much more robust desire than any alleged desire for evil. . . We must be content to grow slowly toward goodness, taking, if need be, a long to time convalesce. Most of us, maybe, will still be barely at the beginning of our recovery even when we die. But that is better than killing ourselves pretending to be healthy.
– Fr. Simon Tugwell

Instead of focusing on my failures this Lent, the things I didn’t do properly, the time I wasted instead of getting to Mass, I need to remember that I have to grow slowly. I need to take a “long time to convalesce.”

This morning, I got up extra early and managed to get tires installed on my minivan at Sam’s Club, then get home in time to put away groceries and get to the noon Mass. It was the first daily Mass I’d been to since about the second week of Lent.