Why Mercy Makes Us Uncomfortable 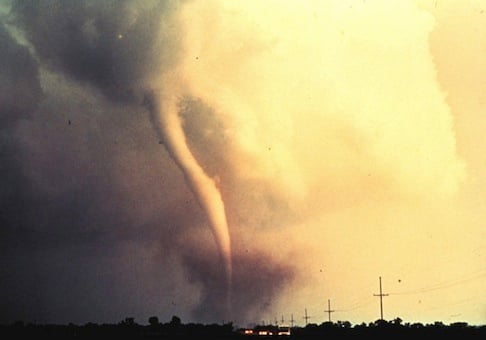 In his second Encyclical, Dives in Misericordia, Saint John Paul II highlighted the fact that we had forgotten the theme of mercy in today’s cultural milieu: “The present day mentality, more perhaps than that of people in the past, seems opposed to a God of mercy, and in fact tends to exclude from life and to remove from the human heart the very idea of mercy. The word and the concept of ‘mercy’ seem to cause uneasiness in man, who, thanks to the enormous development of science and technology, never before known in history, has become the master of the earth and has subdued and dominated it.”

Something very strange happened on Tuesday. Thousands of people in Louisiana, including my sixteen-year-old son, Benjamin, and myself, were sequestered to closets and bathrooms under the immediate threat of a tornado in our area. Hurricanes we’re used to. Tornadoes no.

I sat on the ground in our small powder room with Benjamin’s lacrosse helmet on my head, clutching my rosary and praying for God’s mercy for all in the storm’s path. Our phone alarms had sounded moments earlier alerting us to an imminent threat in our vicinity, and multiple texts had arrived from family members telling us to take cover as they watched minute-by-minute news coverage of a twister aiming right at us.

From the bathroom floor, I pulled up the news on my laptop so I could see how close the tornado was. Suddenly, it occurred to me how unnervingly strange it is that the technology exists to give us a blow-by-blow report on a tornado that might be headed directly for our neighborhood—but that nothing could actually be done to protect us from its wrath. It reminded me that a direct confrontation with the power of nature serves up a sobering wake up call of just how vulnerable we human beings really are, as many of us have learned in recent years in the face of natural disasters.

Interestingly, I had been chewing on Pope Francis’ abovementioned quote by Saint John Paul II all day, trying to figure out why and how mercy makes us uneasy. But the answer didn’t hit me until I was huddled in the bathroom praying for mercy!

Mercy makes us uncomfortable because it necessitates the admission of our powerlessness, and the acknowledgement that we are not, in fact, God. Mercy crashes our illusions that we are masters of the earth because of our technological prowess, calling us to confront the reality that we are not in control. Mercy demands that we have the humility to concede that we are creatures who are utterly dependent on God—creatures that would cease to exist if he turned his omnipotent glance away from us for one millisecond.

To seek the mercy of God is to experience what Joseph Ratzinger (Pope Emeritus Benedict XVI) referred to as a personal “Copernican revolution,” wherein we come to see that we are not the center of the universe, and that God is. As such, we must begin “to accept quite seriously that we are one of many among God’s creatures, all of which turn around God as their center.” (Joseph Ratzinger, What It Means to Be a Christian, 70-71)

Looking at the world around us, it is apparent that we don’t like to admit our own poverty and frailty, nor do we tolerate well the poverty and frailty of others. Asking for and extending mercy requires that we do both: recognize our human fragility and our profound need for help, while “return(ing) to the basics…to bear the weaknesses and struggles of our brothers and sisters.” Pope Francis, Misericordiae Vultus, para. 10.

Frankly, we’d rather not. And it shows in the way we live, the values we embrace and the leaders we elect. Which is precisely why Pope Francis, following the lead of St. John Paul II, unceasingly pushes for what he insists is an “urgent” need for the proclamation and witness of mercy in the world.

To Ponder: Has recognizing my own weaknesses helped me to embrace the mercy of God more fully?  Has it helped me to be more merciful to others?

To Pray: Merciful Father, thank you for your mercy, without which we would be lost.  Help me to acknowledge my own weakness and the need for your mercy, and give me a generous heart in extending mercy to others.  Amen.

Copyright 2016 Judy Klein
This article was previously published on Aleteia and is reprinted here with their kind permission.