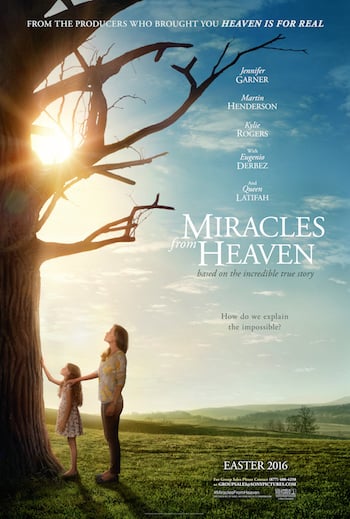 When I read the early press information for the new movie MIRACLES FROM HEAVEN,  I'll admit that my first reaction was honestly, "Been there... done that..."

After having screened the film in advance of its nationwide launch today, I will honestly admit now that I was wrong in my initial pre-screening assessment of this movie adaptation of Christy Beam's book Miracles from Heaven: A Little Girl and Her Amazing Story of Healing. I incorrectly lumped this film in with other recent movies I've seen such as 90 MINUTES IN HEAVEN and HEAVEN IS FOR REAL.

In this pre-screening preconception, I made the mistake of assuming that what I'd take away from watching this film was another story of someone dying, going to heaven and then returning to tell about it. It's not that I didn't like those other movies. It's just that I wasn't sure there would be anything original in this movie.

It turns out that when I did see this lovely film starring Jennifer Garner and Queen Latifah, it was the gritty "real world" segments of the story that most strongly impacted me. Yes, there is a heaven scene in MIRACLES FROM HEAVEN, but very little in this movie matched my preconceptions.

Here's a little look at the film to spark your interest:

MIRACLES FROM HEAVEN is based on the incredible true story of the Beam Family. When Christy Beam (Jennifer Garner) discovers her 10-year-old daughter Anna (Kylie Rogers) has a rare, incurable disease, she becomes a ferocious advocate for her daughter’s healing as she searches for a solution. As Christy searches, she befriends Angela (Queen Latifah), who helps bring everyday joy and hope back to the Beam family. After Anna has a freak accident, an extraordinary miracle unfolds in the wake of her dramatic rescue that leaves medical specialists mystified, her family’s faith restored and their community inspired.

While Garner and Latifah turn in fantastic performances as a desperate mother and a surprising helpmate, it was actually the portrayals of Eugenio Derbez as a doctor with a massive heart and Kylie Rogers as a young girl facing death in the face which most rocked me. Rogers may be young chronologically, but her turn as the real life Anna Beam is masterful. While some may get hung up on the "Anna saw heaven" aspect of this movie, for me it was the grisly heartache of one little girl's bout with incurable disease that kicked me in the gut.

I could so clearly relate to Garner's (as mom Christy Beam's) torment, her questioning of everything that she had formerly relied upon in her faith life. There is one pretty despicable "church lady"  segment of the film where Christy has to interact with well-intentioned but very small minded fellow church goers that left me reeling. How many of us have had someone say the perfectly wrong thing to us in a moment of spiritual or physical anguish? Or how often have we ourselves meant to bless someone in a moment of pain and instead said exactly the wrong words? In watching MIRACLES FROM HEAVEN, it was Garner as Beam's spiritual descent into faithlessness and her ultimate flooding back of belief which most touched my heart. I don't say this to discount the lovely heaven segment, but instead to say that if you have grappled yourself with questions of faith, this movie will open a soft spot in your heart to examine God's role in your life. Especially in the tough times.

Without getting spoilery, I wan't to say, "Stay until the end!" for a portion of the film that's only a few moments long but that really shows the source of the "MIRACLES" that matter most in MIRACLES FROM HEAVEN. You'll find yourself smiling at the many moments each day when each of us indeed has the chance to be a "miracle" in the life of someone in need.

MIRACLES FROM HEAVEN is rated PG and begins nationwide in theaters today.