My son recently asked me about the name Lucifer -- though he knows who it refers to, he also knows it means “bearer of light” and that it's a saint's name, and wondered why a name with such a beautiful meaning and saintly pedigree should be considered unusable. I explained to him that the Church teaches that babies must not be given names that are “foreign to Christian sensibility” (Canon 855), and that no matter what Lucifer means, it is the deepest depth of all names that are foreign to Christian sensibility. There’s just no getting around that one.

, via Wikimedia Commons
My son and I went on to talk more about such things, and I told him that I thought the list of names that are foreign to Christian sensibility is one of those things that changes with time and culture — like Adolf. At one time it would have been totally fine to use for Catholic babies — it’s a saint’s name, and before WWII had a decent amount of use so a lot of us probably have Adolfs in our family trees, but I would definitely consider it to be, currently, “foreign to Christian sensibility.” I don’t feel that way about its variants though — Adalwolf, Adolphus, and Adolfo are all far enough removed from Hitler in my mind that I wouldn’t think twice if I heard of a baby given one of those names. For my time and culture (21st century English-speaking northeast America), I don’t think Adalwolf, Adolphus, and Adolfo are foreign to Christian sensibility. But is Hitler known as Adolfo amongst those who speak Italian? Do Italians have the same reaction of fear and horror when they hear Adolfo as I do when I hear Adolf? If so, perhaps Adolfo is a name foreign to Christian sensibility to them in their time and culture. And maybe one day it will all change again, when some amazing Adolf comes along — perhaps a new, great saint — and the passage of time and the brilliance of the new Adolf will dim the connection between Hitler’s evil and his given name.

Other recent examples of names foreign to Christian sensibility include, on one end of the spectrum, a New Jersey man who named several of his children after famous Nazis (including Hitler himself). On the other end of the spectrum, consider the recent court case of the child named Messiah, in which a judge ordered the first name of a baby named Messiah to be changed because “Messiah is a title held only by Jesus Christ” (the decision was later reversed, and I'm not suggesting that naming a child Messiah is foreign to Christian sensibility -- just that some might consider it to be so). The former example is similar to a situation I know of where a man wanted to name his daughter Lilith specifically because of its dark associations; the latter example has precedence in other parts of the world and points in history, as when the Irish version of “Mary” used to refer to Our Lady was considered too holy for common use, and the contemporary mindset that it’s not considered reverent to use the name of Jesus in English (though it is in Spanish). It's funny to think that "foreign to Christian sensibility" can refer to names with dark connotations, or to holy names whose use would potentially violate proper reverence. 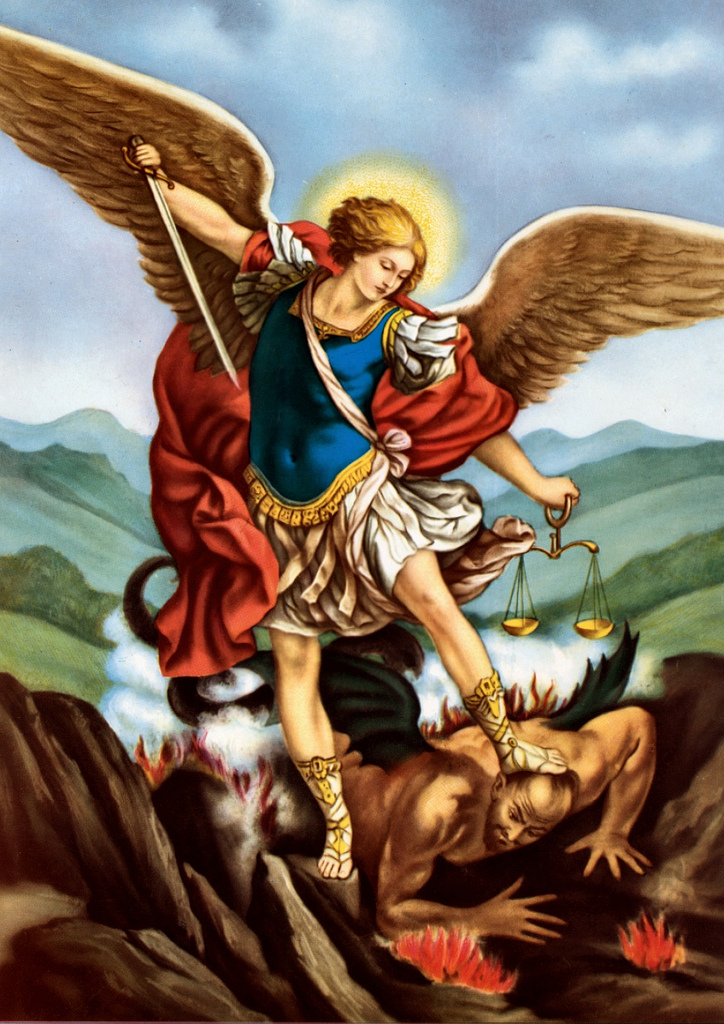 Say a quick prayer to St. Michael for protection after reading the name of the enemy so many times in this article! Photo: Michael defeats Satan 10 by Waiting for the Word (2011) via Flickr, CC BY 2.0

Going back to Lucifer, I think today's parents, with our love of unique names, are particularly vulnerable to dismissing the serious implications of giving this name to a baby: it’s got a great meaning; it’s got a current appearance and sound with the Luc- beginning and its similar rhythm to Christopher (which, interestingly, has a similar meaning: “Christ bearer”); it’s sort of exotic because it’s unusual and edgy because of its associations, which are the kind of characteristics that are catnip to certain modern-day parents. Certainly the TV series Lucifer will add to the appeal, and it's enough on the babynaming radar that one of my favorite name writers devoted a whole post to it recently (fortunately, she's of my mindset regarding this name). If one of the eleven boys who were named Lucifer in 2014 were to become a saint, I could see the name quickly becoming a possibility, even among parents of faith. Would that be a good thing? Names matter, and saying the name of the devil repeatedly and without worry seems very worrisome indeed. But then, I assume a holy person who was given that name at birth would change his name, and then he’d be St. Something-Different-from-Lucifer, which would take care of the problem.

I wrote in an article for Nameberry that, for me, “The intention behind the bestowing of the name can be as important — or more so — than the name’s actual origin or meaning or other specifics.” Such is the case with the neo-Nazi father, whose use of the beautiful name Eva was intended to call to mind the horror and atrocity connected to Ms. Braun; another parent wanting to use Eva to refer to Mary as the New Eve would be totally fine. I hold really firm and fast to this notion that intention usually matters more than other specifics of the name — except in the case of Lucifer. In that case, intention is altogether completely trumped by the “other specifics” -- I don't care if your family has a longtime tradition of bestowing Lucifer on the firstborn son after the special devotion you and your family have to St. Lucifer of Cagliari and his heroic defense of the faith, I can't imagine being swayed from my very strong opinion that Lucifer is not and could never be an okay name for any baby, never mind a Catholic baby.

Do you agree with my assessment of the names Lucifer, Adolf, and Lilith, in light of Church teaching? What other names can you think of that would be on the “foreign to Christian sensibility” list?