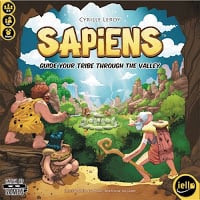 Any fan of games has played with dominoes before. However, when talking with people, I've learned that most people didn't realize that you could actually play a scoring game with them and not just line them up and knock them over. Game designer Cyrille Leroy has re-invented the domino-laying game mechanism with his board game Sapiens!

Sapiens is a board game for 2-4 players ages 10 and up. It takes approximately 45 minutes to play and retails for $40, but you can find it for about $25 on Amazon. In the game, you are a cave man (or cave woman) who is chief of the clan. Your current home has grown to crowded, so you must lead your clan to new lands. You will be seeking food and shelter, but both are equally valuable, so don't devote all your energy to one or you'll find yourself the loser. 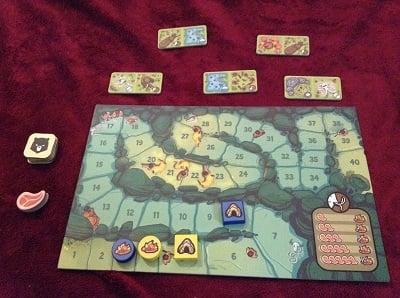 Put the Scoretrack on the table with Mammoth Steak tokens and Bear tokens next to it. Shuffle the 63 Tribe Tiles and place them face down in a stack. Remove the specified number of tiles depending on how many players there are (12 with 2 players, 18 for 3 players, and 6 for 4 players), and then deal five tiles face up to form the common pool. Then, each player randomly takes two half boards (one left and one right) and assembles them to form their Valley Board. Each player chooses a color (red, blue, green, or yellow) and takes their eight Mountain Tokens and randomly fills them on the eight squares on the edge of their Valley Board. After this, they draw four Tribe Tiles and place them face up next to their board to form their personal pool. Lastly, they put their three Fight tokens next to their board and their Shelter Point and Food Point tokens next to the Scoretrack. 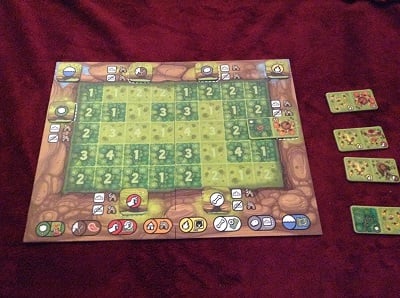 The object of the game is meet your tribe's needs in the two categories of Shelter and Food. You begin by playing one of the four Tribe Tiles from your personal pool in one of the six starting caves on your Valley Board. The icon on the cave must match the icon on the half of the tile you are placing over the cave. You take the Mountain Token from the cave and score the higher number of Shelter Points next to the cave by moving your Shelter Point token along the Scoretrack. You then draw a tile from the stack of Tribe Tiles and is then refilled.

After everyone has made their opening move, the game flow consists of putting a Tribe Tile from your personal pool onto your Valley Board (making sure the symbols match), drawing a tile from the five tiles in the common pool, and refilling the pool to five. Each time you connect tiles, you earn Food Points based on what half of the tile the matching icons occurs. For example, if you match a symbol by covering up a square with the number three, you score three Food Points. You then resolve the matching icon scene. There are eight different scenes and the rewards for these scene include items such as play an extra tile, take a Mammoth Steak, earn more Shelter Points, etc. You could also play a Mountain Token that you previously claimed, which give you the same bonuses with a few exceptions further explained in the rule book. Once both the stack and common pool are empty, the game ends (making sure everyone has had an equal number of turns). You check the Score Track and find what you scored the fewest number of points in (Shelter or Food) and that is your score.

For starters, the game components including the plastic insert were fantastic. The game pieces well all either thick cardboard or wood. The insert tray was perfect and all the pieces fit nicely into it, which made for easy assembly and easy cleanup. This might not sound like a big deal, but there are so many games with worthless inserts. As for the game itself, my wife and I liked most of the mechanics of this game. The idea of playing tiles in a domino-like fashion is easy, and the fact that you are playing the tiles on your board and not a communal board makes you feel like you have a fair bit of control of how the tiles will play out. Also, the simple game mechanic of matching a tile that allows you to both score points and resolve an action adds a nice level of depth to the game. The two things my wife didn't really like were the Fight tokens and placing Bear tokens. These two elements add a "take that" mechanism that she found a bit too cutthroat for her liking. It is a legitimate strategy, but it can make for sore feelings if you focus on using these tokens too much. With all of that said, I think Sapiens is an excellent game that you can play with the family. It has replaced dominoes in my household because of the depth and design.