It's been a long time coming, but today I am finally going to review one of my wife's favorite games - CV. CV is a card and dice game for  2 to 4 players, ages 10 and up. It takes approximately 60 minutes to play and retails for $35. The expansion for this game, CV: Gossip, retails for $20.

For anyone who has ever had a job, you know that CV stands for curriculum vitae. In this game, you will be rolling dice and matching the symbols with cards off the game board to see what kind of life you end up living. Will you have a lot of different jobs? Will you value possessions more than friends? Only you and the dice will decide. Let's get to setup.

2. Deal 1 card from the Life Goal deck to each player. Then, place several more face up on the board equal to the number of players minus one. (In a two-player game, it'd be one card.)

3. Take the Childhood cards (yellow back with a baby carriage icon) and set aside enough cards so that each person gets three (In a two-player game, that would be six). One of these cards has the bicycle card as that indicates who will go first.

4. Deal three Childhood cards to each player and then do a standard card draft. (Pick one and pass the remainder to your left. Repeat this action until you have three cards).

5. Shuffle each deck of cards - Early Adulthood (green back with motorcycle icon), Middle Age (blue back with car icon) and Old Age (pink back with glasses icon) and place each pile on its respective spot on the board.

6. If you are playing with the CV: Gossip, you will shuffle the Gossip cards into those decks as well.

7. You will also shuffle the Fate cards and put two face up near the board with the remainder in a face down deck.

8. Deal out five cards in their respective spots on the board (going left to right) from the Early Adulthood deck of cards.

1. The player with the bicycle card from the Childhood cards lays the card down face up and goes first. He will roll four dice up to a maximum of three times (Yahtzee rules) and try to match the symbols on the dice with symbols on the cards on the game board. The symbols on the dice are a plus sign (Health), a light bulb (Knowledge), two people (Relationship), a dollar sign (Money), a smiley face (Good Luck), and a frowny face (Bad Luck).

3. After you have rolled three times or decided to stop rolling because you like your results, you can purchase a maximum of two cards from the game board, and place them in your player area.

4. The seven types of cards are Event (Grey), Work (Blue), Possession (Yellow), Health (Orange), Knowledge (Green), Relationship (Purple), Gossip (Pink), and Fate (Also Blue). The last two cards are only found in the CV: Gossip expansion. Event cards are one time use only. Work, Possession, Gossip, and Fate cards must go on the top when placing them in your area. The other types of cards (Health, Knowledge, and Possession) can go on top or behind similar cards in your player area, depending on which card bonus you want to benefit from).

5. Shift cards from right to left and reload the empty spaces from the current age's deck. Also, reload any Fate cards if you are playing with the expansion and play passes to the next player.

6. Continue taking turns until all three decks run out, and the player with the most points wins! 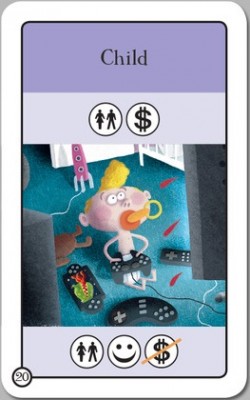 I'm sure it's been said before, but this game is like a mixture of Yahtzee and The Game of Life. Instead of going for 5 of a Kind or a Full House, you are trying to get the right combination of light bulbs, dollar signs, etc. to grab a card and improve your life. For example, if you want a job as a Freelancer, you need a relationship, a light bulb, a smiley face, and a dollar sign. If you can get all those symbols, then each turn you are rewarded with a smiley face, dollar sign, and relationship. Or what do you need to have a child? A relationship and dollar sign, of course! But beware, a child will provide you with a relationship and smiley face every turn, but it will also cost you a dollar sign every turn. And therein is the beauty of the game, the cards just make sense thematically and in real life. Not to mention that the artwork in this game is very unique and makes you laugh every time you look at it.

As for the expansion, I thought it brought two new things to the game. First, the Fate cards can be bought with smiley and frowny face dice rolls, so it gives you a mechanism to negate bad rolls and avoid losing cards you previously acquired, which is a HUGE plus! The Gossip cards add a nice "take-that" element to the game in that you can give one to your opponent (or yourself) and make it harder for them to acquire cards. However, don't give them too many as each Gossip card is worth two points at the end of the game and can add up quickly. In a two-player game, my wife hated the Gossip cards, because they either lingered on the board too long, or it just felt like one person (me) kept buying them and giving them to the other person (her). However, if you are playing with more players the Gossip "love" is spread around and generally no one person gets picked on. Hopefully! I personally don't mind them, but if you aren't the type to attack your opponent, you probably won't like them either.

This game hits all the right notes. It is quick to set up, easy to learn, and simple to score. There is a bit of strategy mixed with luck of the dice and a press-your-luck element as well. It is inviting enough for people new to the hobby, but will also appeal to the seasoned gamer. My wife and I have already played this game scores of times with friends, family, and just ourselves. It is a game that will remain in our collection and one that we will introduce to our son when he is slightly older. I cannot recommend this game enough, and I hope that there is another expansion or simply just more new cards added to the game!

These games were provided to me for free by Passport Game Studios in exchange for honest reviews.