Our Lady of Brokenness

Photo by Lisa A. Schmidt

When I first spotted her, Our Lady of Grace that is, I immediately noticed her broken-off left hand. It greatly bothered and disrupted my sense of order. Our perfect and flawless Mother was missing her left hand. Not very becoming for our Immaculata, the one who bore our Lord and Savior. But there she was, Our Lady of Brokenness.

She stands, appropriately, next to Marian Hall on the grounds of Conception Abbey. Why can’t one of the monks properly restore her hand? Or at least lay her to rest with a prayerful burial of sorts and replace her with a new, perfectly polished, and well ... not broken statue?

I walked on by, but that image of Mary in her brokenness rested with me throughout the remainder of my visit at the Abbey. I continued to think about broken Mary, and I realized she was precisely the image I needed.

I’m a lifelong Catholic; perhaps relapsed is a better way to put it. In all these years of being a practicing Catholic, it has really been just in the past few years or so when I finally developed a closer, consistent relationship with Mary. And that's still a great work in progress. It took feeling all broken and beat up, desperate for help, before I really laid it all before her feet.

I showed Joel these and more photos I took of Our Lady of Brokenness, and he told me a similar story from our friends Nathan and RyAnn Carr from Immaculate Hope Ministries. The Carrs are the husband and wife team who Joel has worked with on developing a pregnancy/infant loss retreat for our diocese. During that retreat, the Carrs set out a statue of Mary. She wasn’t in great form, either, battered and bruised from weathering the Midwestern winter elements. Joel told me they, too, called her Our Lady of Brokenness. Then Joel pulled his science geek card on me and mentioned when two science labs come to the same conclusions independently, it strongly suggests they are on to something.

Maybe the Carrs and I are on to something?

Mary, Our Lady of Brokenness, pray for us! 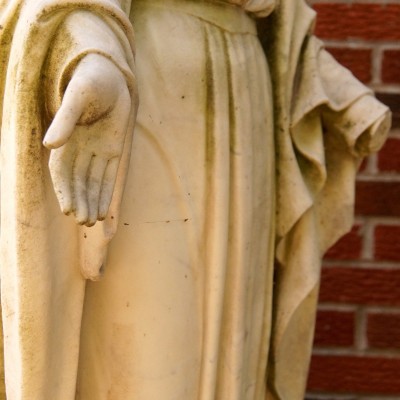 Photo by Lisa A. Schmidt