Saved By the Mercy of a Stranger: Pianist and Composer Eric Genuis Ministers to the Forgotten in Society, Including My Son 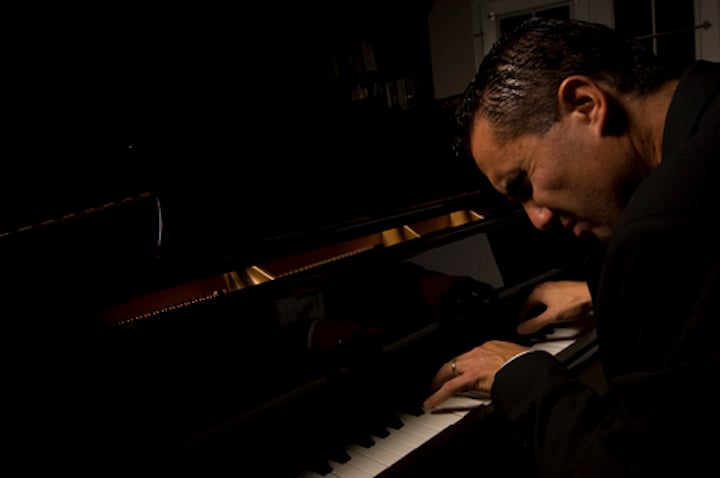 We cannot escape the Lord’s words to us, and they will serve as the criteria upon which we are judged: whether we have fed the hungry and given drink to the thirsty, welcomed the stranger and clothed the naked, or spent time with the sick and those in prison (cf. Mt 25: 31-45). Moreover, we will be asked if we have helped others to escape the doubt that causes them to fall into despair and which is often a source of loneliness. Pope Francis, Misericordia Vultus, par. 15.

Things were dire and, once again, I was begging God for a miracle for my eldest son, Christian. Addiction had reasserted its grip on him, and his life was quickly spinning out of control. What I never expected was that the miracle would come through a virtual stranger—a piano virtuoso and acclaimed composer who travels the world “getting his hands dirty” by reaching out with mercy to the lonely, the imprisoned, and the lost.

Eric Genuis  and I had met only once at a conference in Texas, where we spoke very briefly about our sons’ struggles. “I’m going to reach out to your son,” Eric offered spontaneously. “I know what it’s like to have a child that’s hurting and to be bleeding over that child while the whole world pretends everything is ‘fine'.”

That was the first—and at the time only—conversation I ever had with Eric, and quite honestly, I didn’t expect him to follow up. Shortly thereafter I began a novena to St. Joseph, asking the patron saint of families to intervene to save my son. On day nine of the novena—the Feast of St. Joseph and the same day my late husband, Bernie, was buried—I received a phone call from Christian. “Some stranger just called me out of the blue and talked to me for 45 minutes. He told me that I need to get help, that I can do it, and he offered to help me in any way he could. I had a moment of grace, Mom, like I hadn’t experienced in months. I’m going to get help today. I’m not waiting any longer.”

That day—that one conversation with a stranger named Eric Genuis—jump-started the process that would land Christian safely in Communita Cenacolo, a Catholic community for recovering addicts. A week after that miraculous day, Eric drove six hours to personally meet with Christian to remind him that he is good, that he is loved by a God who is constantly calling him to respond to something deeper, and to encourage him to let go of everything that inhibits his growth in God.

“We hide our vulnerabilities to the point of neurosis in our society and we suffer in silence,” Eric has since shared passionately during one of our many phone conversations. “I firmly believe that’s the root of one of the scourges of our culture—the loneliness and isolation we experience when we are suffering. We’ve got to do more than just say: ‘God bless you, I’ll pray for you.’ We have to engage!”

Engage Eric does, as he travels the world ministering over one hundred concerts a year to “the forgotten of society” with breathtaking original classical musical compositions via his “Concerts For Hope.”

[Tweet "The root of one of the scourges of our culture is the loneliness and isolation we experience when we are suffering."]

“I hope to facilitate a powerful encounter with beauty and goodness to ‘the least in society’ in order to elevate their human condition, bring inspiration, recognize their innate dignity and give hope,” explains Eric. For the past fifteen years, his audiences have included those in detention centers, rehab facilities, nursing homes, and prisons, as well as those in private homes, churches and at Catholic conferences.

What motivates this man, who lives on a small farm in Kentucky with his wife and four children (several of whom have special needs) to help so many others? “When I was a child, the Bible story that really got my attention was the Parable of the Good Samaritan, which I begged my parents to read over and over again,” explains Eric. “Two people walked by the wounded man, too busy and distracted to help. I don’t want to walk past anyone that God puts in my path. I want to be attentive at all times to what God is asking of me, even when there are no standing ovations, no letters of gratitude, no accolades.”

No standing ovations came after Eric’s meeting with my own beloved son—but Christian’s life was rerouted toward saving grace thanks to a good Samaritan who stopped to minister to his wounds. Moreover, my own heart was profoundly touched by Eric’s mercy, as I was reminded once again that God hears and answers the cries of the poor—especially the cries of poor, desperate parents who suffer, like Eric, me and so many others—over the pain of our hurting children.

Copyright 2016 Judy Klein. This article is reprinted here with the kind permission of Aleteia, where it was originally published.

The Kindness of Strangers
Read
Welcoming the Stranger
Read
Book Review: This Flowing Toward Me: A Story of God Arriving in Strangers
Read