When the Crib Meets the Cross: Our Personal Adoption Story 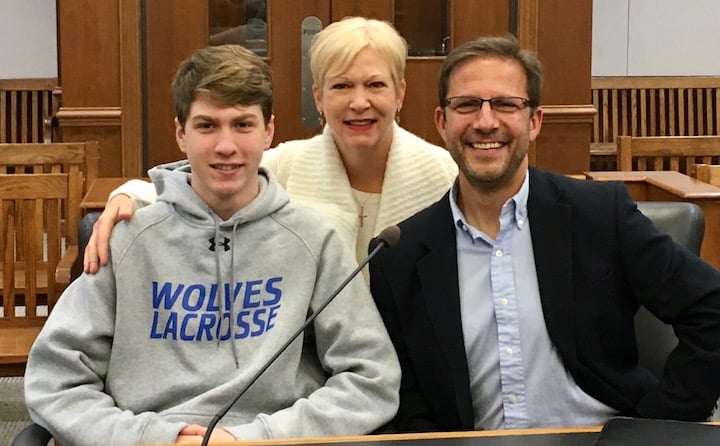 The minute the judge walked into the courtroom on December 5, I knew I was in trouble.

What I had envisioned as a measured ritual of signing papers at the courthouse became an extremely emotional event when the judge, who surprisingly was a family friend, swore us in and asked for personal testimonies. Suddenly, I was weeping openly as my forever baby boy, now seventeen, sat beside me grasping my hand.

[Tweet "God answered @jklein's prayer for a mentor for her son by sending her a wonderful husband."]

How could I explain to her that I had begged God to send a mentor and father figure into my child’s life, but that I’d never expected that God would answer my prayer with a wonderful husband, too? How would I convey in words the way I’d watched Ben latch onto Mark from the day he walked into our home, and how obvious it was that he’d loved Mark from the start? And how could I possibly articulate Mark’s generous, patient love for my beloved son—love that helped Ben find steady ground again after his Dad died months after he turned the tender age of nine?

After all, how do you put love, suffering and redemption into words?

“I knew your Dad, Ben, and he was a wonderful man,” the judge continued as the tears flowed. “And I know your family has been through a lot.”

Especially during December, I wanted to say.

December will forever be remembered in our family as the month a much-loved husband and father suffered a massive heart attack, never to return home again. In one fell swoop, December had morphed from the month of attending annual Nutcracker Ballets, decorating always-enormous Christmas trees, and binge-watching Miracle on 34th Street into the month of spending endless desperate hours beside a loved one labeled by doctors as “the sickest patient in Louisiana.” One seemingly insignificant day had converted December from the month of fresh piney smells, magical white lights and the sound of Christmas carols playing in the living room to the month of nauseating hospital smells, ominous fluorescent lights, and the never-ending clanging of life-saving machines attached to the hallowed body of a husband and father.

Here it was December again and we were standing in court recalling the pain of a crucifixion while beholding the glory of a resurrection, all at once. How could I explain that to the judge?

Because how can you possibly put love, suffering and redemption into words?

Love, suffering and redemption: they encompass the beginning, middle and end of the Christmas story. The story moves from a holy night to a holy Cross, from the wood of the crib at Bethlehem to the wood of the Cross at Calvary. In both places a Mother prays, knowing that only God can make a way for deliverance from the dark threats that surround life, believing that only God can somehow work things out for good.

I’d worried endlessly about Ben after his dad died, wondering who would encourage him, teach him, show him how to be a man? I’d felt the fear of what it could mean to be a fatherless child in a fallen world, begged God to somehow make a way for my son when I could see no path before us.

Mark literally showed up out of nowhere; having spent almost three decades as a missionary in foreign lands—many of those spent rescuing orphans from the streets and serving as a father figure to glue-addicted kids running for their lives from human trafficking. He had clearly heard God say it was time to go home to Louisiana, and though he didn’t understand why, he obeyed. Months later our paths converged in the tiny adoration chapel of our parish church and the rest, while they don’t say it quite this way, is holy history.

The wooden beams of our own crib and cross were transformed before my eyes by the wood of a judge’s gavel, as I heard her declare Ben “adopted” and Mark “father.” Indeed, I heard it as clearly as angels singing on high: love, suffering and redemption put into words—words made flesh during December.

This article was previously published at Aleteia and is reprinted here with kind permission. Copyright 2017 Judy Klein.