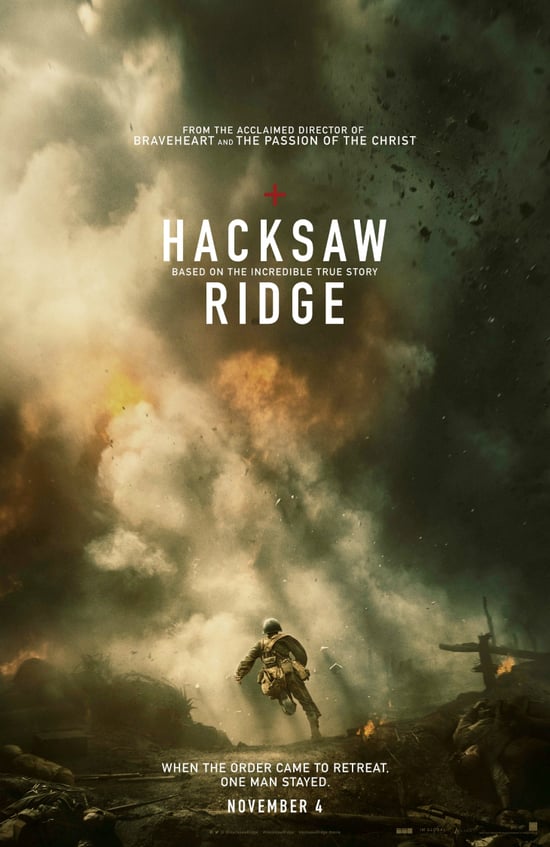 I'm happy to share the great news about a brand new film directed by Mel Gibson and coming to theaters November 4th. Based on the true story of World War II hero Desmond T. Doss, the first conscientious objector ever to receive the Medal of Honor, Hacksaw Ridge features an all-star cast that includes Andrew Garfield, Vince Vaughn and Sam Worthington.

Here's a look at the story as told in Hacksaw Ridge:

HACKSAW RIDGE is the extraordinary true story of WWII medic Desmond Doss, played by Andrew Garfield (The Amazing Spiderman), who, in Okinawa during the bloodiest battle of WWII, miraculously saved 75 men in a matter of hours without firing or carrying a gun. He was the only American soldier in WWII to fight on the front lines without a weapon, except the simple prayer he uttered before he single-handedly evacuated the wounded from behind enemy lines, under constant enemy gunfire and artillery bombardment. Doss’ courage and faith won the admiration of his commanders and fellow soldiers, as he saved the lives of the very men who had persecuted him for refusing to carry a gun. He believed the war was just, but to kill under any circumstance was wrong. Doss was labeled the first conscientious objector (he called himself a “conscientious cooperator” as he volunteered) to receive the Congressional Medal of Honor.  Hacksaw Ridge is directed by Mel Gibson (Braveheart, The Passion of the Christ) and also stars Vince Vaughn, Sam Worthington, Teresa Palmer, Luke Bracey, Hugo Weaving, and Rachel Griffiths.  Coming to theaters nationwide November 4, 2016.